On a cold and grim Tuesday morning we set off to Ellesmere Port to learn about the good work being done at the Endeavour social hub from its founder Paula Collins.

Endeavour was launched in March 2013 with the aim of “ bringing older people together for a fun enjoyable day out in a warm and caring environment. Theres a lot of older people out there who dont get out , do much with their lives, dont see anyone…” Paula has experience of working with a national age related charity and after being made redundant she wanted to continue in similar work

Her inspiration was her mother. “She always used to say to me, “you endeavour to do what you can in your life” My mum lived in Chester and didnt have anywhere to go, she wasn’t old minded,, I wanted to create a place where they’re not made to feel old..They might have white hair, but they’re people just like you and me and its important not to patronise older people”

“Theres a lot of talk now about loneliness in any generation, but more so in the older generation, because your health goes, because not everybody can get in the car, not everyone has a car,a nd you’re in that house, all day on your own..and you might not see anyone..the community spirit isn’t so much there as it was years ago”

Paula is the sole member of staff but has help from a small number of dedicated volunteers:

“The social club runs on a Tuesday and a Thursday. Its 10-2 with a freshly prepared meal and various activities.. we’re not a Bingo place! We dont play bingo very often” Paula laughs. Activites include “chair based activities, belly dancing, chutney tasting, folk music,sushi tasting community talks ie police, fire… we’ve got a chap coming in talking about being awarded an MBE… bee keeping, cheshire ice cream.. community stuff as well as fun and enjoyable stuff… It gives people variety” Clients pay £9 for the 4 hour session including the food. Paula cooks , sometimes with help from a volunteer. Funding has come from the local Cllr’s budget , which has enabled subsidised transport from Ellesmere Port and Neston Transport to bring clients to the hub.

The popularity of the Tuesday and Thursday sessions (The Tuesday hub is now full) has led to a further session on Wednesday, “Amazing Graze” where again a meal and table games are provided 12 til 230. Paula is looking for new clients for Thursday from The Port and surrounding areas

Paula is originally from Blacon…but has lived in the Port for 31 years. She remains fond of Chester but feels that its “quite sad that the shops have gone down, the bustling city that it was, doesnt appear to be there now.I think Cheshire Oaks has a lot to do with that. I know we’ve got the walls, I know we’ve got the river, the racecourse…we’ve got a lot of great things. ..I think Cheshire Oaks has killed Ellesmere Port..” In a town where McDonalds recently closed down… “Change comes in all the time…” but the change that has enabled Endeavour to thrive and find a home. Paula praises her local councillors including Justin Madders : “he has really batted for Endeavour.” “We were very fortunate this year to get their own premises as a result of the shop regeneration programme in Ellesmere Port. Paula is greatful for many local businesses and organisations who have helped to fund and develop Endeavour, and hopefully in the future open the programme up to a wider audience.

Endeavour is in the process of becoming a fully fledged charity by the end of Jan which Paula hopes will open up new avenues of funding, including lottery cash. “I would be very interested in branching out in Chester.. in the future, even getting premises in Chester” Paula showed us her collection of photographs documenting the range of activities enjoyed by the clients. She was full of praise for local companies such as Urenco, Inner Spec, Ellesmere Port lions, as well as Cheshire College- 2 volunteers were helping Paula at the time of our visit. Access to training who run the neighbouring Montague cafe, a youth community hub were also praised for their support. She also thanks Dave Tai of Cheshire West and Chester council for support

We joined some clients playing Rummikub, as they waited patiently for their lunch of chicken in red wine sauce. “I’m 84 next month.. I’m just learning how to email.. I don’t know what you mean when you say you’ve got a blog” was the ice breaker.

: “I have been coming for about 18 months. I come 3 days a week because I live alone , I get my meals cooked here, it saves on my central heating, and the company is wonderful… what more can you ask for? “

No one on the table knew each other before Endeavour…”it is ideal for getting you out of the house, instead of sitting in on your own.. They all praised the variety of activites and friendships they’d built: “I’m not used to talking to people because I just sit on my own all the time”

“Especially the winter months, because we couldnt wait for Christmas and New Year to be over so we could come back and meet friends

“its great I really enjoy it”..” Its better than watching Homes under the hammer!” We remarked, to laughter from the clients 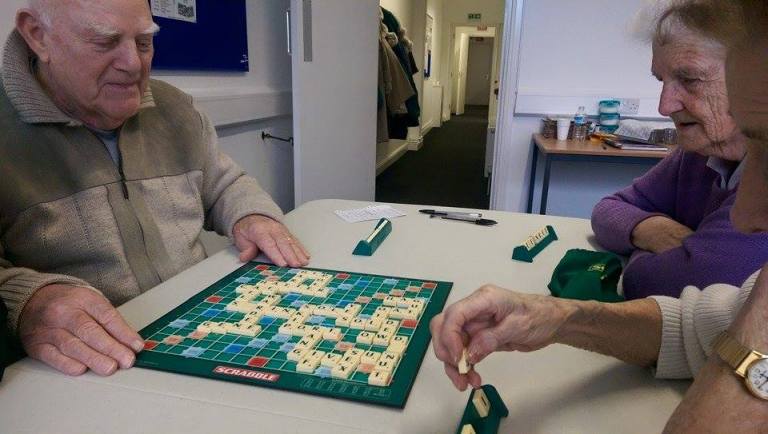 We joined Bruce, Bess and Jean playing scrabble “ I told you they were spies!” Jean joked “ no pictures, Im wanted by the FBI!” (lived in the Port for over 50 years).. Bess “ its gone down a lot since we had the outlet village, we used to have more individual shops where we had personal service, not the same since the supermarkets took over. It was a good town, everything we had was on this main street..” “You can say that about a lot of places though can’t you” Jean conceded.. “that what they call progress isnt it…”

The last words go to Bruce…..“i’d be lost without it.” 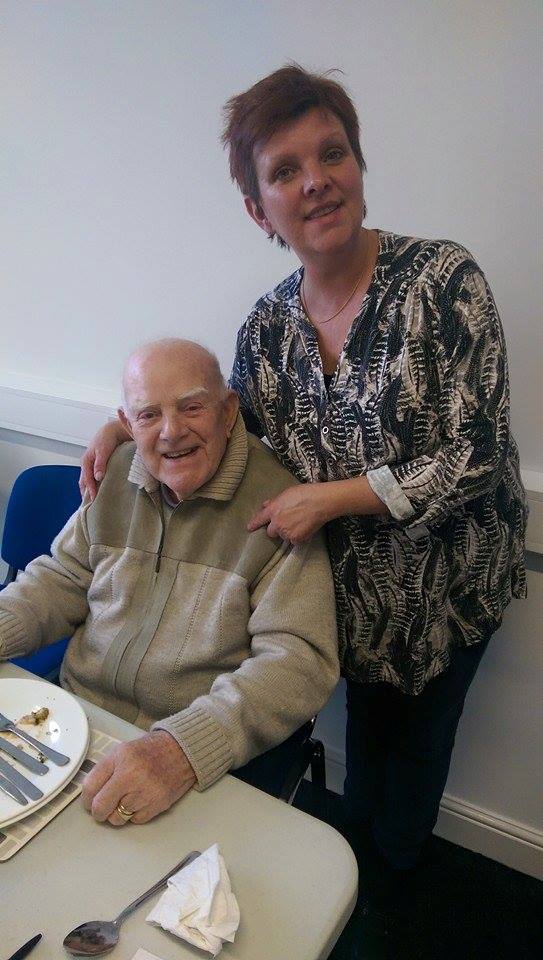 Thanks to Endeavour for their time and hospitality.

By @shitchester and Jamie Hall

One Reply to ““The youth club for the older generation””