A crowd of over 60 people gathered on a calm Summer’s evening to remember the events of 70 years ago when nuclear bombs were dropped on Hiroshima and Nagaski, ending WW2. The event which takes place every year is organised by the Chester branch of CND. The host stressed that it was a non political event with the sole intention of remembering those who died and suffered in the bombs, as well as those that were damaged or injured for the rest of their lives. The bombs resulted in a death toll of over 200,000 people, the majority of whom were civilians. 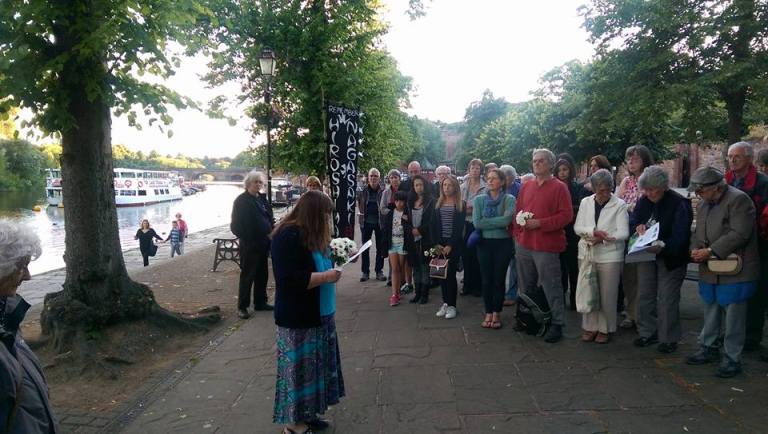 The first speaker read the story of Sadako Sasaki to the crowd. She was 2 years old when the bomb fell on her home city of Hiroshima. She developed leukaemia from the radiation poisoning and whilst suffering in hospital in the 1950s she began folding paper cranes from anything she could find. Japanese legend says that if anyone folds 1000 paper cranes their wish will come true. Sadako got up to 644 before she died at just 12. She became an icon for the peace movement in Japan. The story has “inspired generations to pursue a peaceful and just world” and Sadako is a symbol of hope for a brighter future.

The group moved onto the suspension bridge which was adorned with paper cranes, where white flowers were dropped as an act of remembrance. As I watched the flowers gently floating away into the night, a two-minute silence was held in which I reflected on the stark fragility of our lives.

The peace tree, planted in 2004 on the far bank of the Dee, by an official from the Japanese embassy was the site for the final reading, a speech originally given by the major of Hiroshima. “From infant to the elderly, tens of thousands of innocent civilians lost their lives in a single day. By the end of the year 140,000 had died . An atomic bomb is an absolute evil, that robs people of loving families and dreams of the future,plunging their lives into turmoil. The absolute evil is not susceptible to threats and counter threats, killing and being killed. Military force just gives rise to new cycles of hatred. To eliminate the evil, we must transcend nationality , race religion, and other differences.. value person to person relationships and build a world that allows forward thinking dialogues.”

One Reply to “Japanese peace memorial”

Leave a Reply to The Uncheshire wife Cancel reply