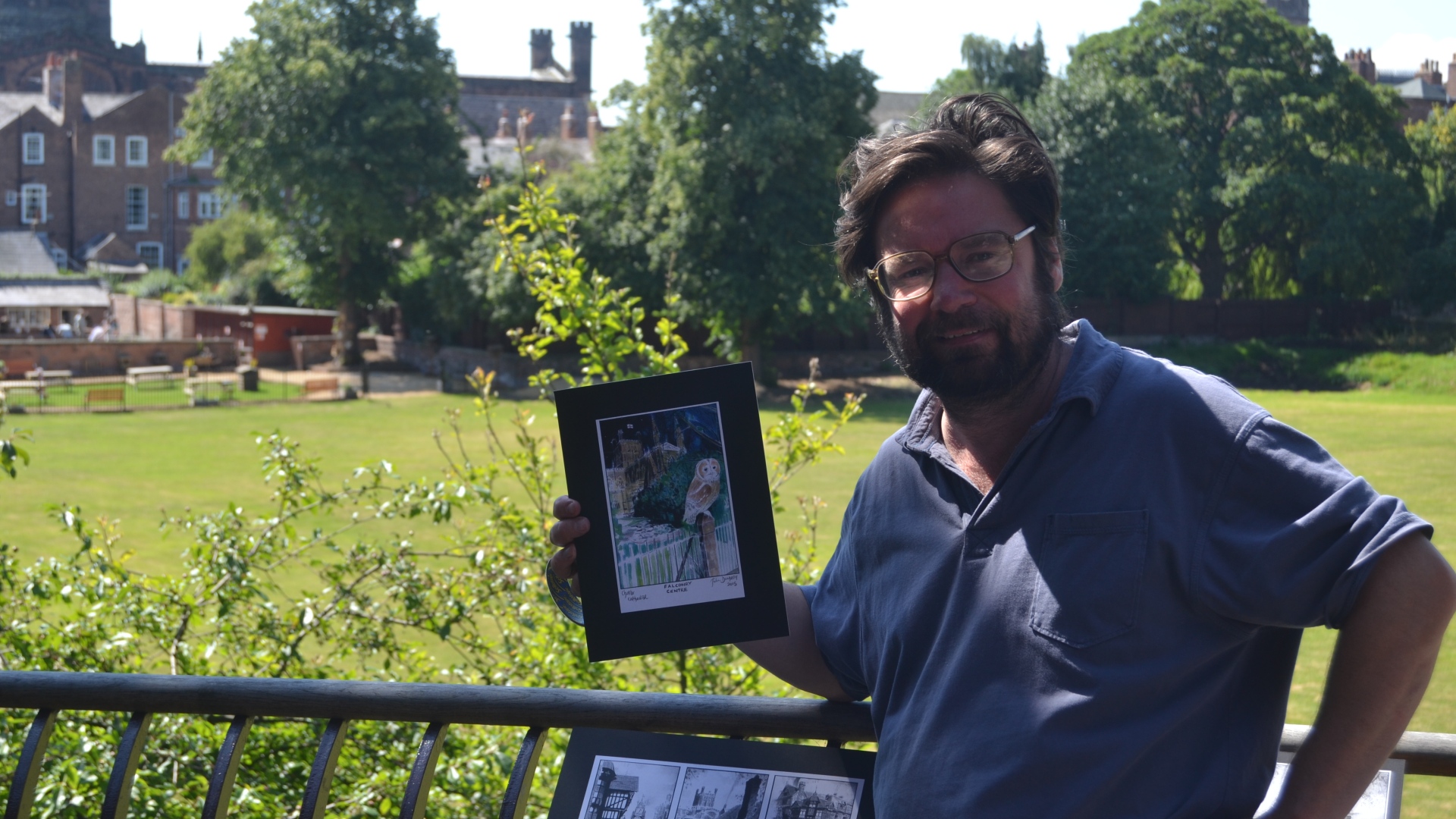 One of Chester’s unsung heroes, the artist John Donnelly (see https://shitchester.wordpress.com/2014/09/16/20-years-on-the-walls-john-donnelly/) is currently working from King Charles’ Tower. I caught up with him last Saturday :

“I’ve been here since January now, because of the work that’s going on by the clock. The clock is finished, but they still have work to do on the bridge. I’d be interested to get other people’s opinion of the way its been painted… I’m not too happy about it myself, I think they’ve taken away some of the fine detail, especially in the actual clock face. For example there are cherubs either side of the clock face, which they just seem to have plastered with gold paint. The previous design, painted in 1995, you can actually see the detail on the cherub’s heads”

Of his current home John says ” It’s certainly different. the beauty of Chester is, everywhere you go it has a different sort of aspect. You can be down by the river.. I don’t think there’s anything like being in the centre of the city, I think it has a vibrancy and a buzz around it . The architecture is second to none, the black and white architecture, which I think as an artist you wanna capture. But, down here its lovely, it’s very tranquil and quiet. Theres a beautiful view looking over the Dean’s field to the Cathedral, and the new falconry centre, it really seems to be taking off now. It’s another aspect of the city which makes it unique…

“…. We had a group past last week from Pennsylvania, it’s a group of student football players and they have been coming every other years for about 25 years. I’ve received a lot of commissions , from the girls in the group, there are more girls now playing football, so I’ll be sending work out to them… We should do more to encourage that kind of thing, they go up to Scotland after they’ve been to Chester. They always choose Chester as a place to stay, and they stay in London as well… The head coach has got a real soft spot for Chester.

John says that often visitors can be shy about entering the tower, and that many do not expect to see a working artist inside. “People have a perception of art as an elitist thing, they’re not intruding on some kind of experiment, it’s just an artist at work.” John welcomes everyone into the tower , where is currently custodian.

“It’s a unique place to work , everyone that comes in, I give them a history of the tower, which is quite detailed. The more you go on, the more you find out about it, the battle of Rowton Moor, the King going and staying in Gamul House… Like everywhere else in Chester its steeped in history. For any history buff Chester is the place to come. ” I commented to John that the best of Chester is something that combines the best of the past with an eye towards the future, progress and development ” I agree, it’s about getting the balance ” he says.

He champions the work of his neighbours in the Cathedral. “The Cathedral is brilliant. It should be a focal point, and this falconry business is just one of those initiatives. I’ve been commissioned to do a picture of the falconry by somebody that going out to America, and somebody wants a picture of the new Fountains medical centre… I think its fantastic what they’ve done with it. My old doctors was the Elms in Hoole and I had great misgivings about it. The experience I’ve had so far has been brilliant. They have art work on display in there for sale. On each floor there is art for sale. And there was a band playing there the other week in the foyer at lunchtime!

John can be found most days working patiently in the tower while he awaits the return to his spiritual home. He describes a recent random  experience in one of Frodsham Street’s many charity shops.” I took my daughter in , about two months ago, and one of my pictures was actually for sale in there! It was a commission I’d done of the Grosvenor Hotel about ten years ago. It was quite funny, I had to buy it.”

He says the Clock is his home and it would be nice to get back there…”Word is the end of September, we’ll keep our fingers crossed”