Friday night, the week before last,( the timings vague but its been a rough week)  artistic types gathered at Art at 41 for the launch night of the Peter Blake exhibition.  Blake, born 1932, is  regarded as the “Godfather of British Pop Art” and  is perhaps most famous for  designing  the iconic Sgt Pepper album cover for the Beatles in 1967 (for which he was paid a one-off fee and received no subsequent royalties!) My first thoughts on looking at some of the collage based  work on show was “he was good with the scissors.” Jay Windsor, staff at the gallery explained about the Pop art movement, and the meaning behind some of the art:

“Pop art was a movement that started in the 60s, there was a big divide between high culture and low culture. The problem with that is, you had the academics defining what you should paint and how you should paint.  Andy Warhol is probably the most famous, and Peter Blake, the English equivalent… they realised you could find beauty in anything.. the side of a cigarette pack can be beautiful. For Warhol it was his Campbell’s tins.. ” The pop artists were asking “what is art? And that’s a question that has reverberated for the last 40 years. If you see something that’s beautiful, and you can capture the beauty of it, that is art! You don’t have  to have some stuffy old guy trained by the Royal Academy saying “I don’t like that so no one likes that!” That’s what Peter Blake started , and it’s still happening now. ”  Jay explained how the iconic pop art of had helped the rise of Coca Cola to its global brand status. They made people realise , that everything is great, and anything is  art, and art is art for art’s sake. The only problem is people get annoyed, and people have taken it to far.. If you walk into Tate Modern and you see a white square, you think “it’s not art” , but there’s context, it all depends on what the artist is saying. Peter Blake wanted to shock and make people realise anything is possible.”

The works on display included collages of Venetian and Parisian scenes, and colourful and eye-catching prints of Hollywood stars. Blake often mixed high and low art, as in one of his early works, “On the balcony” which combines a boy holding a Manet painting with badges, magazines, packaging milk bottles etc.

The Fag packet art, which people will either love or hate: 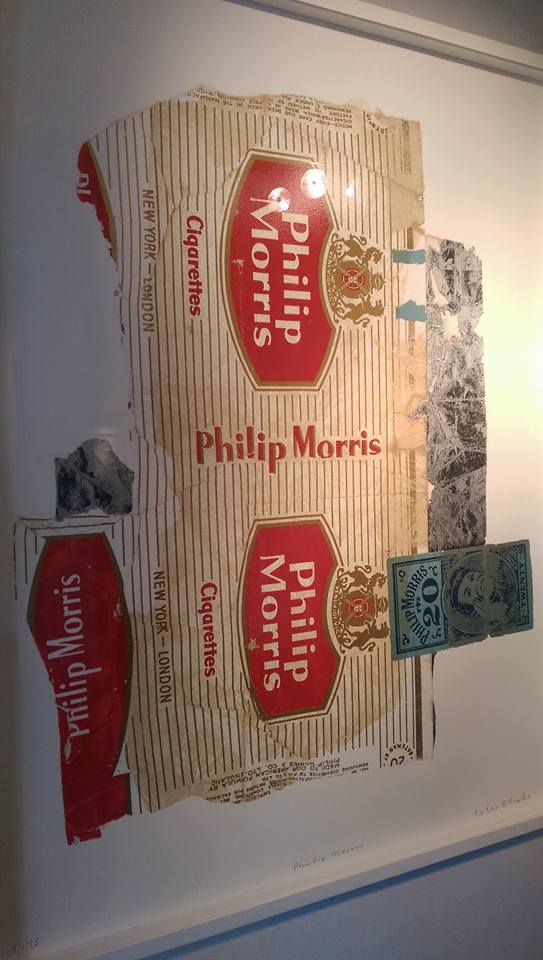 “Iconic 20th century design and branding” says the blurb. Simple but effective and I did like it in some unknown cool way.  “American Trilogy” – featuring Elvis, the American flag and a crate of coca Cola was also  strangely emotive, with imagery representing  consumerism and the American dream.

“It’s just rubbish in the street to some people. that was  never going to be high art” said Jay:

That will have been from a cigarette packet, his idea is if you keep zooming in you will get to the core. that’s now become high art (as opposed to the low of adverts, posters etc) Blake enthusiast Daniel Schott commented:

“He sort of buzzed off it both and didn’t see a difference did he! ”

As someone who always seeks to find the beauty in the offbeat and the unusual, despite some initial misgivings I found the exhibition thought-provoking. Art at 41 has been a welcome boost to the Hoole cultural scene since opening last year. The exhibition runs until the 24 Oct