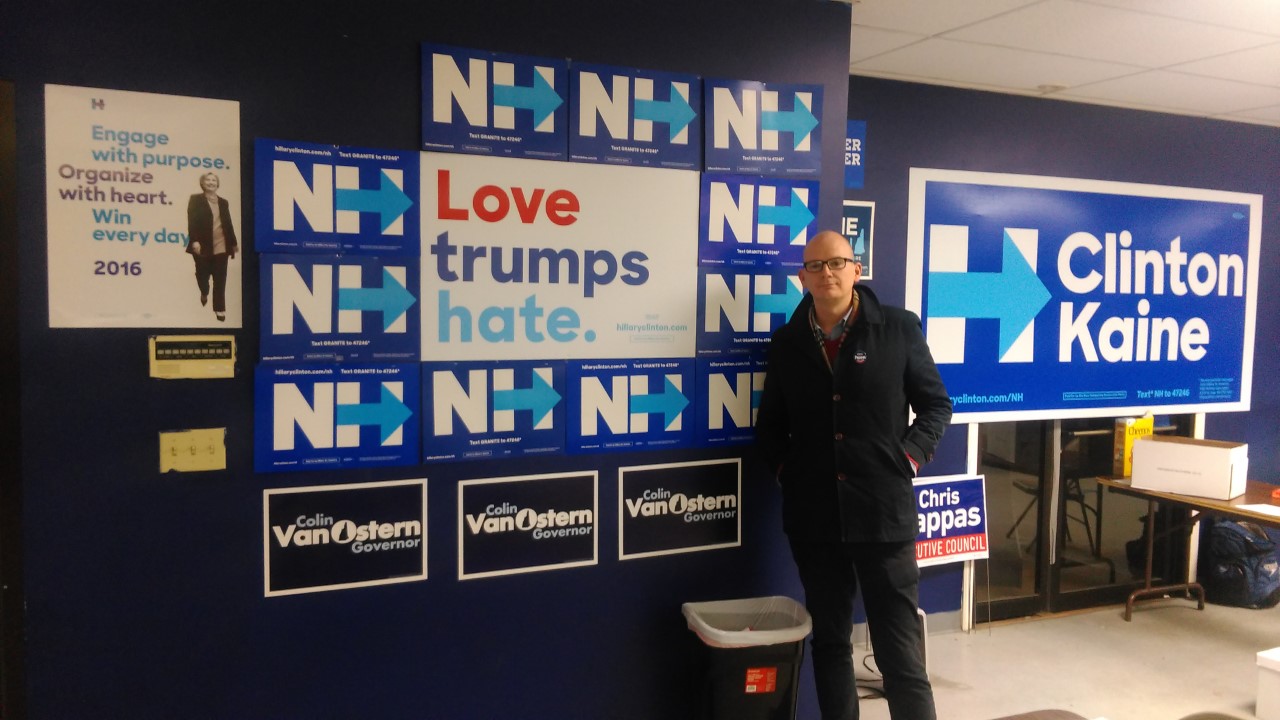 Electioneering is big business in America – it’s a profession for a lot of people and rigorous organisation delivers winning results. I came here to observe, to learn and to support Democrat Congressional and State candidates in their bids for electoral victory on the 8th of November. It costs around one hundred thousand dollars to run for even a local state seat here, which makes what I spent on becoming a councillor in Cheshire West look like pocket change.

Manchester is a familiar place to me, I lived here for three months in 2012 when I came to join the Obama re-election campaign. It’s a typical New England city; wide roads linking blocks of largely wooden, colonial style buildings.

New Hampshire folks are straight talking – their state slogan is “Live free or die” – it’s emblazoned on number plates, flags and the tattooed arms of men (and women) whose doors you might end up regretting knocking on when you call to ask them how they intend to vote.  I like it here though; the people are friendly and the historical links between our countries are viewed favourably by everyone you meet.  There is a Cheshire County and a Chester amongst other recognisable places – so accents and cultural idiosyncrasies aside – it feels very much like home.

Life is not so different either.  Folks are mostly concerned about the economy and looking after their family. They want security in a world which only offers uncertainty and, like in the UK, the traditional way of doing politics is being undermined by a war of misinformation. This has led to a general sense of mistrust amongst the electorate and these are the conditions which have allowed Donald Trump to emerge as a ‘voice of reason’ for many people.  Anti-establishment rhetoric and the politics of fear have whipped up a divisive and dangerous atmosphere that is pitting core demographic groups against each other. It is a stark contrast to the unifying message of hope that Obama was peddling last time I was here.

Trump’s campaign strategy is not new of course, it is just magnified by his extravagant personality. It starts with division: “don’t blame these people for your problems, blame immigrants”, “don’t look to the super rich to pay their taxes, look to the weak and vulnerable who waste all of yours”, secondly it seeks to discredit the opposition and institutions by twisting history and focusing attention on unsubstantiated claims of wrong-doing.  Trump’s campaign is about engaging disenfranchised voters with the promise of change – regardless of whether it is practical or even possible. This entire strategy is best reflected in his most recent advert, a $4 million campaign targeted entirely in the swing states.  The synergy between the rhetoric of the Trump campaign and Leave campaign is stark. Trump is playing a game of numbers, if enough Democrats and undecideds don’t trust Clinton then they will stay home instead of voting on Tuesday. Then all Trump needs to do is turn out his Republican base, plus the disenfranchised voters that he claims to speak for, and he has a shot at the big prize. Trump arrived in Manchester last week, he was speaking at a large hotel on the main street in town. It was totally stage managed so I couldn’t get near, but I hung around a large pink sign that proudly proclaimed “Women for Trump” – I couldn’t see many women there, but I did overhear one lady (who was carrying a “Hillary for Prison” sign) shouting at passers-by about the joy of giving birth. Abortion is still a big issue amongst far-right conservatives in the United States and they look to the Republican candidates to reflect their anti-abortion views at election time. The whole ‘Hillary for Prison’ thing has become an important part of the ground campaign for Trump supporters, on the weekend two women wearing Hillary masks and dressed in stripy prison clothes spent a few hours standing at a busy intersection and waving at cars. It’s all part of the circus.

People in New Hampshire lean towards conservative family values, so they are mostly politically right of centre. They like guns and are committed to their right to own one, but stronger controls on who can get hold of them has become a popular stance for leading Democrats since I was last here.  This is a measurable success of the Obama administration.  There are others too, but overall Obama’s two terms in office have been marred by an inherent atmosphere of disunity and partisan political thinking, both in Congress and the Senate.  This has led to many Americans suggesting that he has not achieved what he set out to do. However, as one activist said to me, he will probably be far more effective as a young former President because he can bang the drum for real action in poverty stricken communities without the constraints of still holding office.

Homelessness has increased since I was here last, people are struggling because the rich are getting richer and the rest are not. The symptoms of the failures of post-recession capitalism are visible on the streets. Most of the local candidates talk a lot about the opioid crisis in their election literature, which has mostly been caused by people over-medicating on highly addictive prescription drugs, then turning to hard drugs when they can no longer get a prescription or can no longer afford to treat their chronic ailments legally. Addiction has led to social issues and increased crime. More people die from drug abuse than road accidents here, which says a lot for a state that doesn’t have a law for adults wearing seatbelts or for wearing a motorcycle helmet.

In 2012, the Democrats successfully ran a campaign around everyday people being part of the 99% of Americans that are not super-rich.  It was effective and they are running with it again this time around.

The Democrats need to win seats at all levels of federal and state government to deliver a legislative agenda that will have a real impact for ‘the 99%’. The ballot paper in New Hampshire on polling day will be 18 inches long – there are a lot of people running and a lot of positions to vote for. If they can win the down-ticket races for Congress, the Senate and the local state legislative races then they have a chance to alter the fiscal status quo in America and change the tax loop holes that starve the federal and local governments of revenue, they can change the rules on campaign finance that dirty the politics of Washington, they can properly finance Obama’s health care plans and in New Hampshire they can fund addiction centres to tackle the primary issue that they face as a state.  For all of this to happen then a high turnout at the polls will be everything – and this is the point where the two campaign strategies collide. A high turnout amongst Democrat voters is essential for Clinton, whereas Trump is doing everything he can to encourage them to stay at home. 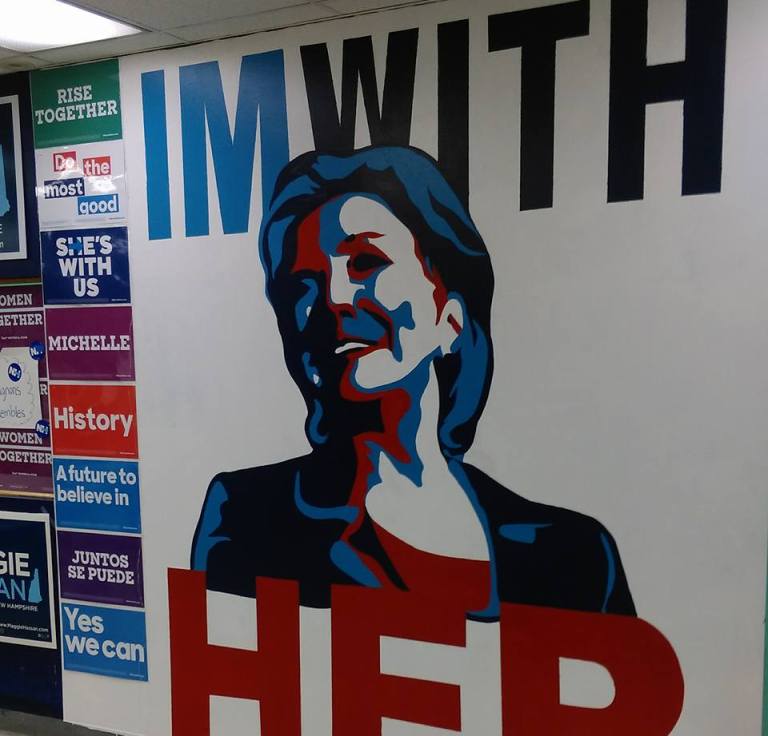 The culture in the campaigns is very different, Trump is paying people to knock on doors in New Hampshire – they have teams going around on buses. The Democrats have volunteers – thousands of them – they are knocking on doors, making calls, putting up signs and delivering literature.  It is a machine, well-oiled and even more impressive than the last time I was here. On the weekend, 300 volunteers from across New England came to canvass at the Manchester campaign office where I am based, they have over 600 volunteers scheduled for polling day already. There are a lot of Brits here too and a couple from Norway turned up on the weekend. Trump has some volunteers too, but I’d be surprised if there were any British people helping him. Trump’s road side campaigning events seem angry and random rather than friendly and coordinated. The Trump campaign seems to have spent more on billboards and other traditional communication channels  to Clinton too, the adverts mostly carry the simple but evasive promise of “taking our country back”. Over the weekend there was an aeroplane flying over the city towing a large banner proclaiming “Chinese Americans for Trump.”  It was somewhat surreal.

In the past seven days, the Trump campaign has been pushing the trust issue for Hillary Clinton hard. It was at his speech in Manchester where he whipped up the latest round of conspiracy claims for the ongoing private email server saga. His words and tone are in stark contrast to the now world famous speech delivered just over the river on the west side of the city by Michelle Obama two weeks earlier. Hers was the speech that denounced the behaviour of Donald Trump towards women following the release of the video tape where he talked about assaulting women. Manchester is the epicentre of mud-throwing in this election. Out on the doorstep, I get the sense that most people just want it to be over.

There’s something about an American Presidential election. It’s more like theatre than politics, I am not particularly a Clinton fan, but given the rather limited choice between her and Trump then there is no contest. For me, a councillor from our leafy borough in England, this election has been like focusing the light of the sun on politics using a magnifying glass.  It is intense because the stakes are so high – big money, big corporate interests and big ideas clash in a flight for the ultimate prize – a seat behind a desk in the Oval Office.  For the average American I think it is hard to know what to believe, but in the end the best bit about it is that it all comes down to everyday people turning up and putting a cross in a box next to a name of someone they have more than likely never met.  The big question is though, will ‘Love Trump Hate’ – can the politics of fear and division win the day? Or will the people here rise up and say…“Donald, you’re fired”?