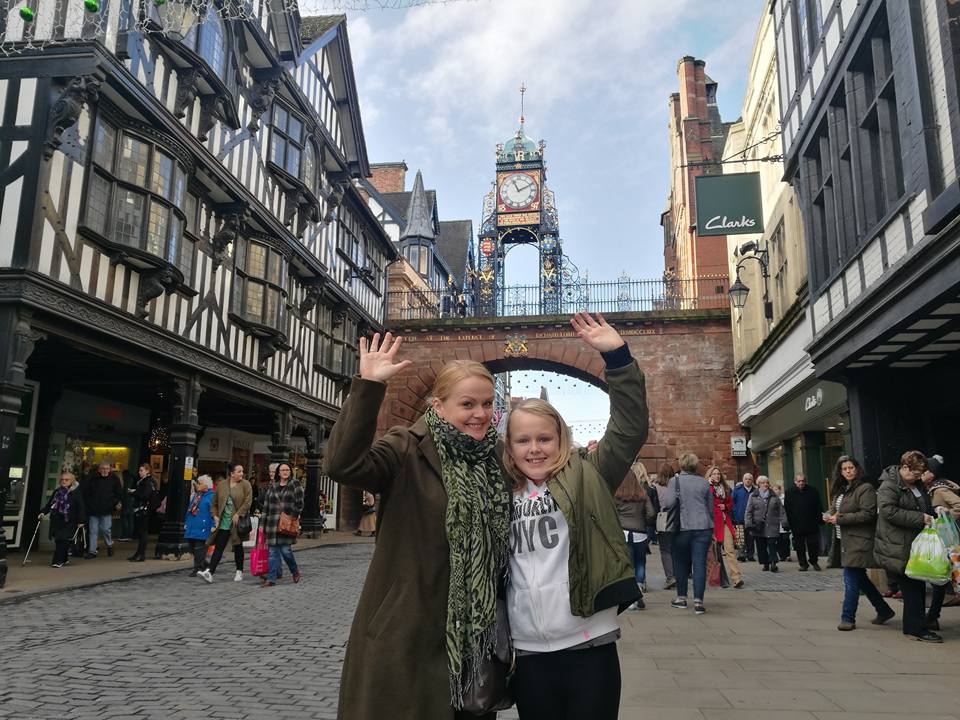 Christmas in Chester : “The lights are OK…We didn’t see the switch on. They do the lights every year so I think its kinda boring for some people and exciting for others. I forgot what colour they are! They’re beautiful, green reminds me of mistletoe…

“With the club I am making its going to be called the creative club and the max is 18 people and we’re going to do Christmas crafts for kids that are lonely at my school!

“I like the market they sell lots of cool stuff. My mum likes the mulled wine. I liked Santa’s post office last year. I’m scared of people in costumes ! You can send your letter to Santa and post it there..

“I like the decorations and stuff.. Where is the music in the market?? I can smell pancakes… Its like church music! I’d like jingle bells…(sings) ” Admiring some character keyrings : “You can get dad’s fighter guy from the old games!  and also BB8 ! I don’t like Elsa from Frozen! ”

Town hall :  “I went there with my class and it was kind of fun but yet again, kind of boring at the same time! ”

“I am kinda excited about the new theatre opening. Its going to take a lot of room, I think its nice. ”

Bridge street: “Burger Shed is a burger dressed as a shed! ”

Seren’s mum comments , “Scotts has been there since I was a teenager!”

Grosvenor Museum : ” I like the museum, its not as good as the Liverpool museum. I liked the Samurai sets, and the house. I have only gone once… I like museums because it tells you all about historical meanings of stuff ”

Period house: “ kinda scary, I think the people are going to come to life and chase me. Is that Queen Victoria but fatter ?  ”
When asked if she would like to live in Victorian times : “There was no television or video games so what would I do ! I like watching horrible histories so I know a lot about history. My favourite is the Greeks and the Pioneers… I like Slimy Stuarts and Groovy Greeks.

“It’s Edward Huffle-puff ! He looks like the evil guy from Harry Potter.

“I wouldn’t like to live here because you’d get the cane for talking in class. We just get shouted at ! I don’t want a picture of myself in a hat !

(exiting the shop) “I thought that girl at the desk was Honey G!  ”

“Its really fun , its like the arctic ! ” Featuring a Polar bear once used by Foxes Glacier mints for adverts and photography by Sue Flood… “With the loss of sea ice polar bears lose access to their source of food.” 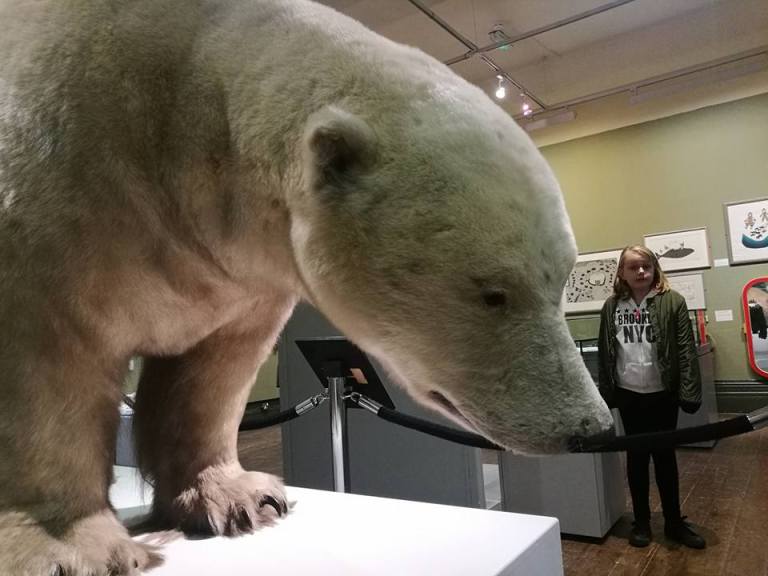 Amphitheatre: We’re at the coliseum! I like it, when we come here we jump off the walls and stuff. Maybe they could do a little play for the children. They could make it into a little play place. I like the Romans because I like battles! They used to fight in here. On Horrible histories they said some used to fight with blindfolds on their head. ” Dee House: “they should turn it into a dungeon!”

Grosvenor Park : “they should have a bird seed stall where you get bird seed and bread for the ducks and nuts for squirrels. I guess if you feed them too much they could get a bit vicious.  I like the playground and the river and the open area. Good for running and playing football. The children’s railway is a bit babyish. They could have a bike trail ! ”

Foregate street: ” I want Primark to be demolished for one reason, because all their clothes rip easily. They could put a Lego shop there. Its sad BHS has gone I used to get a coke at the cafe, I mixed every single flavour together and it just tastes like raspberry !

“I like Pound land because everything’s a pound until they wrecked that motto and got the fake grass for £40 !! I think Wilko is a fun place to shop, I like the Christmas stuff ! Also they sell toys and bricks..

Chester Market: ” I like all the different stalls, my grandma had a cake stall and she used to take me there every day.

“There’s a few dead flies, who care’s its amazing ! Stormtrooper ! Oh my god I can’t believe you put a storm trooper outside ! I’m playing with my Lego when I get back ! ”

Thanks to Seren and her mum Rachel O Kelly

One Reply to “A Child’s view of Chester”