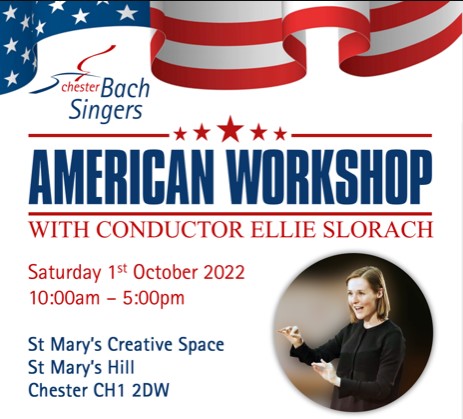 One of Chester’s top choral groups is offering lovers of choral music the opportunity to take part in a special 1-day workshop hosted by one the UK’s most dynamic up and coming young conductors.

The workshop, staged by Chester Bach Singers which takes place at St Mary’s Creative Space in Chester on Saturday 1st October between 10am and 5pm, will be led by popular conductor Ellie Slorach. Attendees will get the opportunity to work with Ellie and take an in-depth look at works by American composers including Aaron Copland, William Billings, Morten Lauriden and Eric Whitacre.

Speaking about the exciting opportunity to work with Ms Slorach, Helen Crich, Chair of Chester Bach Singers said “This is a great opportunity to work with one of today’s most dynamic and exciting young conductors, exploring works by Copland, Billings, Beach, Lauridsen and Whitacre. Ellie is the Assistant Conductor for the Orchestre Philharmonique Royal de Liége and Artistic director of Kantos Chamber Choir. In the 2021-22 season, she has also worked with the BBC Philharmonic, BBC Singers, London Sinfonietta, and the Royal Liverpool Philharmonic Orchestra and Choir and we are very much looking forward to her joining us once again for what will be a very special day.”

In the 2020-21 season, Ellie worked with the BBC Singers for recording and filming, conducted the London Sinfonietta in workshop and participated in conducting sessions with the Royal Opera House Orchestra. She also conducted a number of performances of Northern Ballet’s ‘Swan Lake’ at Leeds Grand Theatre.

In addition to the special workshop, Chester Bach Singers are also staging their first concert of the 2022/23 season. Entitled Radiant Splendour – Music of Love and Light, the concert takes place at Wesley Centre, St Johns Street, Chester on Saturday 15th October at 3pm and will feature Tomás Luis de Victoria’s Requiem 1605 for six voices (written in 1603, published in 1605), Hymns from the Rig Veda by Holst and Five part-songs from the Greek Anthology by Sir Edward Elgar.

Tickets for both the workshop and concert are available from www.chesterbachsingers.org.uk