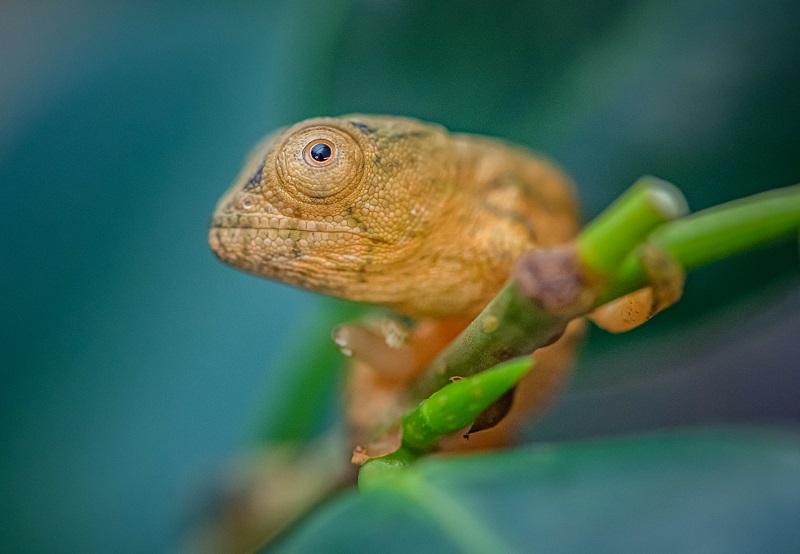 Reptile experts at Chester Zoo have become the first in the UK to successfully breed the world’s largest chameleon.

Staff at the conservation zoo believe it to be the first time ever that the rare Parson’s chameleon has hatched in a UK zoo – according to official records.

So far 10 chameleons have emerged from their eggs, with another 17 still in incubation. Parson’s chameleons currently hold the record for the longest incubation period of any reptile – the process of the eggs being laid and then hatching taking up to around two years.

The first of the rare hatchlings arrived measuring just 2cm long and weighing just 1.5 grams following a 569 day incubation period. They will grow to be around 70cm and 800 grams.

Conservationists at the zoo have described the breeding success as a “momentous and exciting event” and say that the skills and techniques developed to achieve the breakthrough could potentially help save other species from extinction.

Jay Redbond, Team Manager of reptiles at the zoo, said:

“To be the first UK zoo to successfully hatch a clutch of Parson’s chameleons is a momentous event for the team here – but most importantly it’s a major breakthrough for the species.

“The levels of intricate care and attention to detail provided by team over a number of years to achieve this breeding success has been truly remarkable. We’ve had to carefully replicate the seasonal variations of Madagascar and mimic the exact same conditions these chameleons experience on the island, right here in Chester, and that’s no easy feat. Every slight tweak to temperature and humidity each day and night has been meticulously recorded and, now that we’ve cracked this, we believe we’ll be able to take this information and apply it to help save some of Madagascar’s other threatened reptile species.

“This important clutch of eggs, along with all that we’ve learned along the way, will now help us play a part in preventing the extinction of this incredible species, and many others just like it.”

The Parson’s chameleon population has declined by more than 20% in the last two decades as a result of widespread habitat loss on the island of Madagascar. Its forest home has now become so fragmented that experts believe the reptiles are unlikely to survive without drastic intervention.

“Our teams are currently on the ground in Madagascar, alongside our partners Madagasikara Voakajy, fighting to protect what’s left of the island’s beautiful forests and the species that call it home. The widespread destruction of the forests on the island has seen more than 90% of its trees cut down for agriculture and logging – taking with it hundreds of precious species that cannot be found anywhere else on Earth, just like the Parson’s chameleon.

“That’s why we need to learn as much as we can, as quickly as we can to help prevent species from becoming extinct. These new hatchlings may be small in stature for now, but their impact will be huge in helping us to accelerate our efforts to save some of Madagascar’s rarest reptiles. The information gathered by our experts will now go on to be shared with other conservation zoos just like ours, kick-starting global efforts to create a safety-net population of these incredible chameleons – and we’re enormously proud to have played a vital role in protecting their future on this planet.”

Chester Zoo’s reptile experts are recognised globally for their ground-breaking research and discoveries. The team were the first to ever successfully hatch a tuatara, a prehistoric lizard that only lives in one area of New Zealand, after it became extinct everywhere else more than 70 million years ago. The team also discovered in 2006 that female Komodo dragons are capable of virgin births without mating with male dragons, a process known as Parthenogenesis, which was previously unknown to science.