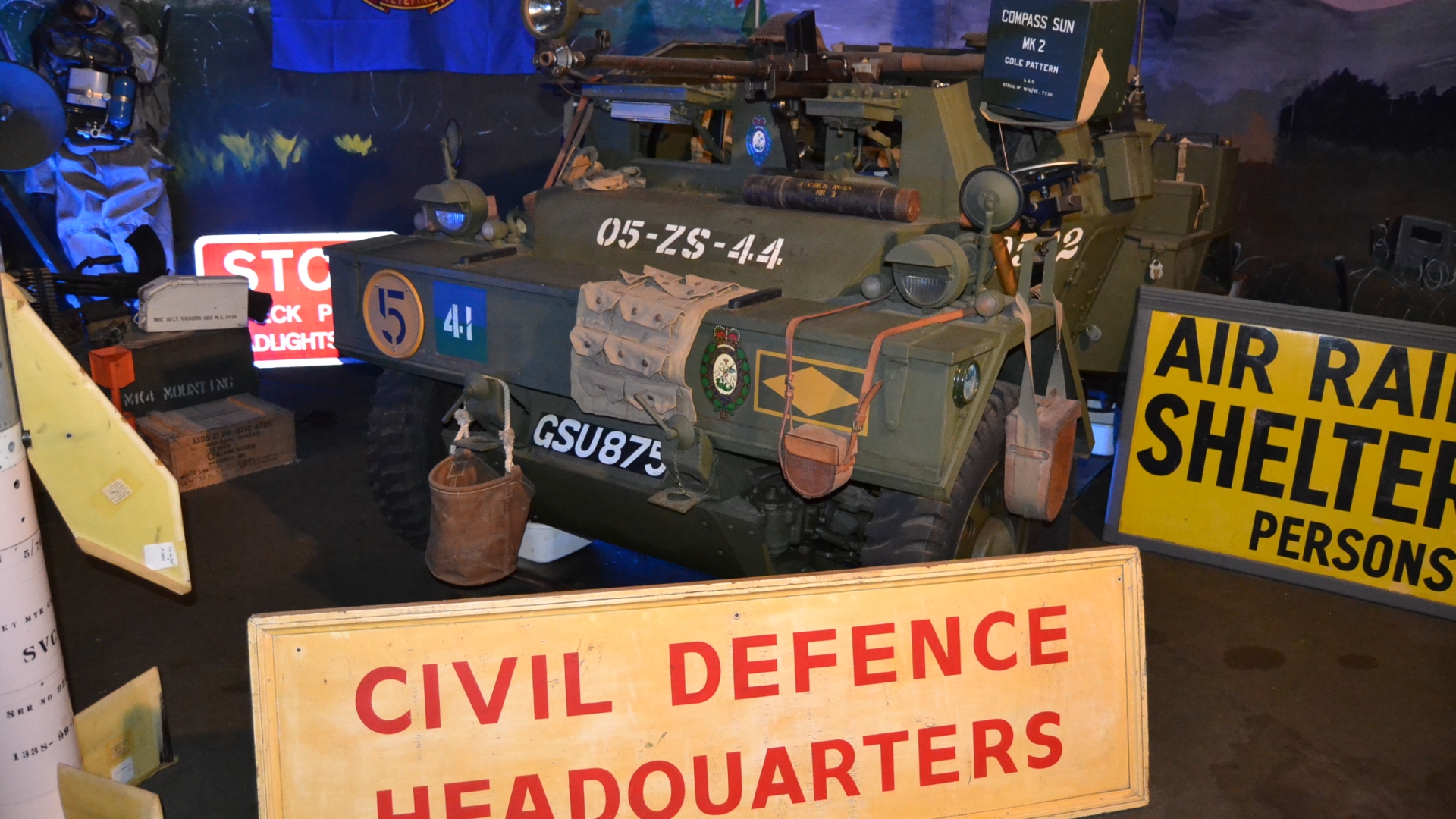 On an isolated country lane just outside Nantwich stands the Hack Green nuclear bunker, a former WW2 radar station that was later converted into a cold war bunker and centre for regional government in the event of a nuclear attack. The ironic signage gives directions to the “Secret bunker” and on arrival a massive radar station and a barbed wire fence greets visitors, along with a guardhouse and lapsed warnings about the official secrets act. During the cold war this place would have had a very different atmosphere , but even today there is an unsettling atmosphere to the place.

The entrance hall hosts a wide array of wartime and cold war memorabilia including a variety of de-commissioned nuclear weapons, air raid shelter signage, military equipment and uniforms etc. There is an overview of the wartime role of the base and then after a short walk through the cold clinical corridors you are soon plunged into the horror of a potential post nuclear world. The hospital room (not suitable for children) features a grotesquely made up dummy with radiation burns, flesh hanging off its eye and a bowl full of what looked like bacon strips (but may have been bits of dropped off flesh) soundtracked by a nurse describing how the patient is bleeding from all her body orifices, and the sound of the patient’s anguished painful cries. All very disturbing.. the more you learn about the implications of nuclear war, the scarier it becomes (well for those with an impressionable mind anyway)

The renovated bunker contains original equipment that would have been used by the government, safe beneath the concrete as the rest of the population staggered about with radiation sickness, blindness,  third degree burns and civil disorder etc. You can learn about the surreal crapness of the “protect and survive” campaign which told the public to build a fallout shelter in their homes and label and bag the bodies of their dead relatives. The display cabinets of men in fallout suits and suited Russian generals are more disturbing than any Hollywood horror film.

The maze of corridors houses a cramped dormitory, several radar rooms, missile early warning system, fallout monitoring, a bbc radio studio and various offices where ominously named officials like the “burials and disposals officer” would have worked. The cinema room shows the once banned BBC docudrama “the war game”. A very lifelike production showing the effects of a nuclear attack: “the sound of an enormous door, slamming in the depths of Hell”.. The haunting imagery of the war that never happened includes a man carrying his blinded child, houses burning, firefighters dropping dead from carbon monoxide poisoning as they battle a firestorm,. the deranged and wounded wandering down streets littered with corpses as the police carry out mercy killings etc. A very sobering reflection on the fragility of the world we live in and mans inhumanity to man.

The museum is brilliant and thought provoking and a great insight into the secret world below us. Exit through the gift shop where you can buy a pen, rubber or fallout snow shaker. Rest a while in the café for a tea next to a decommissioned bomb. Lets hope we never reach “Bikini alert: red” and don’t forget to paint your windows white!

A surreal day out well worth seeking out.

One Reply to “A fun day out at the nuclear bunker”