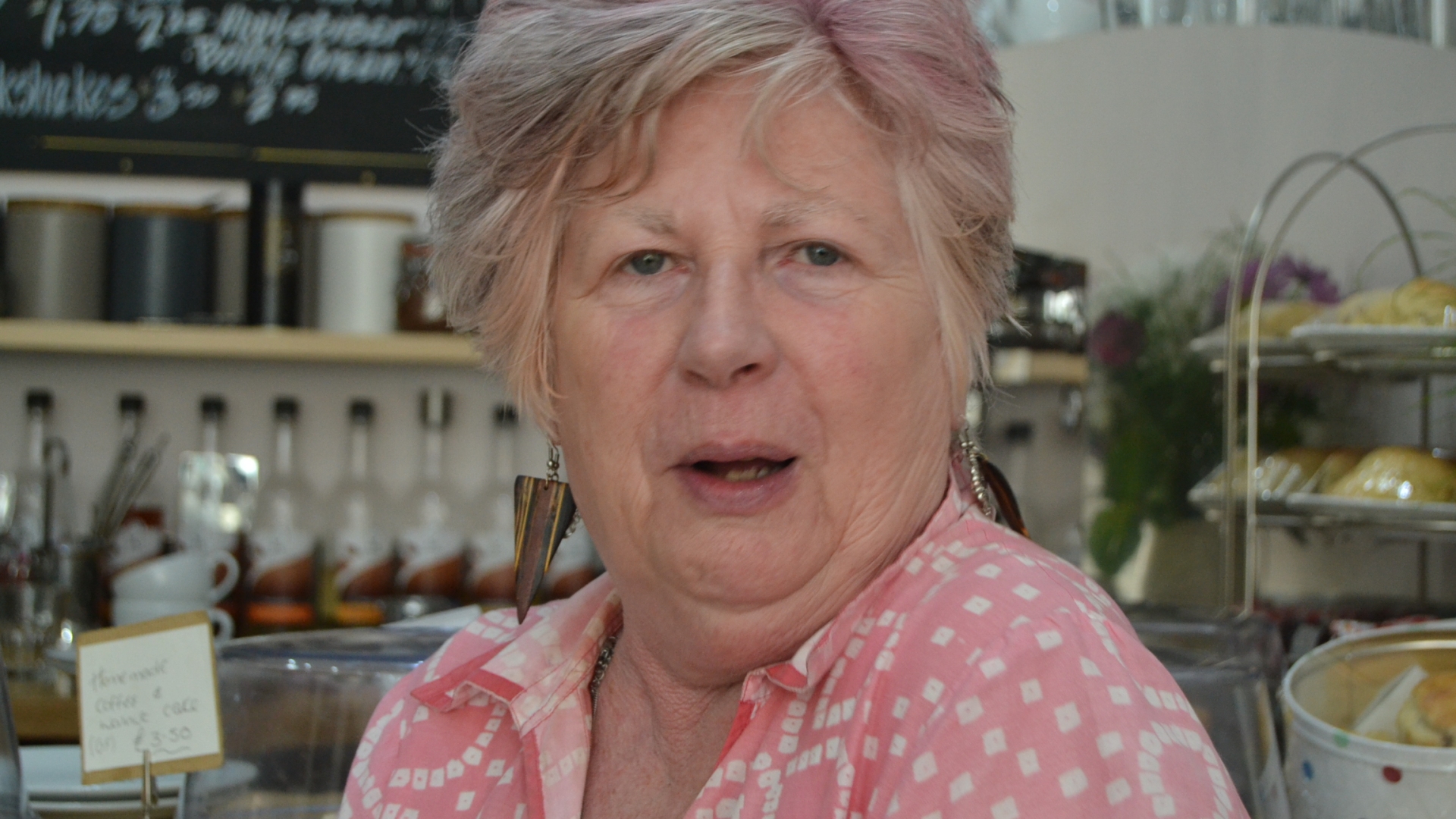 “Im old and I’m putrid!” Liz jokes as we settle down for drinks in Marmalade. Liz is a well known and sometimes controversial figure in the Northgate quarter having lived in Chester for 31 years. In this blog she offers some thoughts on Chester life and offers some tales of her varied and at times stormy life. She grew up in post war London, “people today don’t know what austerity is.. there is no such thing as austerity when theres a welfare state. My sister and I grew up with nothing.

Her memories of London are largely clouded by time. However she says it was “fabulous” in the 60s. “I met The Stones. They started off in the Ealing jazz club, which my friend Alan ran. He let me in free because I didnt have any money. I wasnt impressed with Mick Jagger, he was a tiny little creature, nothing to him! Big lips of course! I used to see them at the Crawdaddy in Richmond and the 100 club on Oxford street” She also recalls seeing Oliver Reed outside a chemist: “I would have had sex with him that very afternoon. He was gorgeous, breathtaking, I fainted.” 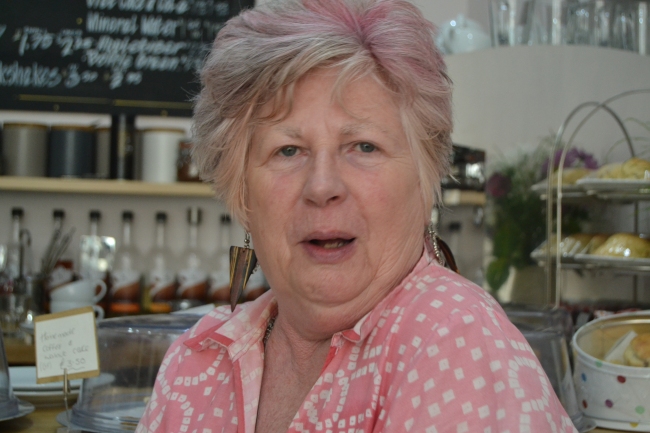 Liz says she has worked as a teacher, nurse, in bars and hotels, as well as brief time as an escort. She also taught English to students in Europe. Whilst she was having teacher training in London, one of her best friends was murdered. “Shot dead with a double barrel shot gun at point blank range. All the tabloids knew of the story. Hanging was still in at the time [abolished 1964] I had to go to the Old Bailey.. it was a crime of passion, a menage a trois. He got off with life in Dartmoor, it was diminshed responsibilty” Quietly she says “I should have been with him that night. I could have been shot dead that night…”

Liz has often walked a dark path, some of which is too dark to include here. She did voluntary work with homeless people and the mentally ill. “I saw a woman lift up a sofa, throw it through a window and then threaten me with a piece of glass. All I could think was “I’ve got a brand new coat on and I dont want to get any arterial blood on it” ” she makes light of the traumatic incident. “If I cant help someone I might as well not exist. I hate religion, racism, labelling, discrimination, it makes me want to vomit”

She came to Chester because of a man. “He was 6ft 5” but gives no other details. “I’ve seen masses of changes in the city, the gross deterioration of the faux buildings. Its always been a poxy little toy town” she claims bitterly. I ask her why she stayed so long in a city she dislikes? “I stayed so long because of my children and grandchildren. I made my bloody bed and Im sticking with it” She bemoans the lack of culture in Chester. ” I have to bore down to get a decent conversation. There is nothing for people my age” But what would she like to see in Chester?”Less people and I want all the shops closed, apart from the independents” Sparking visions of the apocalypse, she says that she “cant wait for the Eastgate clock to be a twisted mound of metal”…

She says she would love a concert hall, but concedes the point when I mention the performances hosted by the Cathedral and the recent music festival. She then side tracks onto a rant about the political system and the county in general “this country really is heap of malfunctioning concrete especially the politicians.. shysters, schmucks. We need a revolution! I’d change the education system, stop all exams and make the focus on caring and sharing” she says idealistically. “Capitalism is going to the wall and there has to be a new way. Industrialisation has gone because there are no resources to make the things for people to buy then throw away.. get rid of the aristoracy, they’ve all got to go.. [she continues]…”

I challenged Liz about the positive aspects of Chester life and found much to go on. “My culture is children and grandchildren and meeting people like you, Graham (co owner of Tri Active) and Handels court gallery. Of Handels court she says ” I like the people, they’re an eclectic mix of brilliant minds and they put on lovely open evenings” Also “Marmalade is about the best there is.. and myself. I’ve got a me complex, Im a solipistic bitch! I’m very addicted to the Northgate quarter, I like this area best of all, it doesnt depress me” Of the independent cafes she visits “I call them my care homes. There is one pub I go to called the Coach house , wonderful staff, they treat me like royalty, Citygate cafe, Jack it in , wrap it up, great staff”

“I like the Grosvenor museum, Peter Bowden the curator makes everything fascinating. Its great in there, nice and small. It has a nice little theatre, And I do like the Hammond school, they have a cracking theatre. I saw Giselle there, the ballet,. I was in tears. I had to walk out, it was emotionally draining, in a good way” Liz also speaks highly of Pizza Express and Brown sugar in handbridge. Having been in Chester for so long she says that “familiarity breeds contempt. Its gone down the pan! We’ll be dead by the time we have a theatre, it’s not going to happen, it just won’t happen” she says gloomily, echoing the long term frustrations and dashed hopes of many Cestrians. “You’ve got the freemasons, they look after their own, they look after the PFI!” (she mimics putting something in her pocket) In summary “I think its better than a lot of places, we could be in the Potteries!”

At this point Liz stands up, puts on an American accent and exclaims ” I feel like I’m on Oprah Winfrey, my gawd you make me so nervous!” She then holds up an LP box set which she says she found in a skip. “Every single day I look through skips. I found a 13 tog double duvet in pristine condition. It comes from the war years, having a formidable intellect and wanting to stretch my brain cells looking for things. I think its the surprise element!” 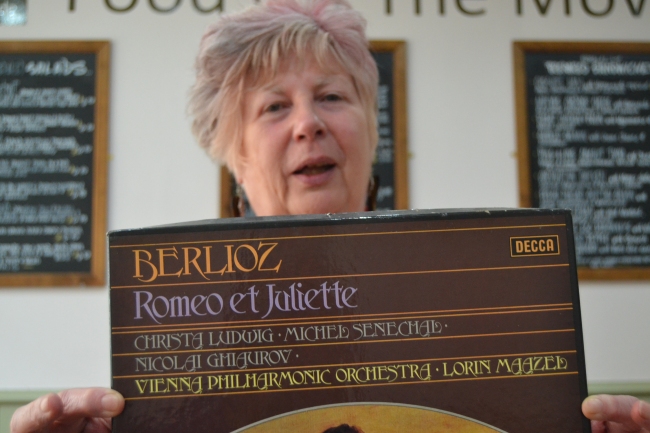 I ask Liz about the newspaper cutting she often carries around, a front page of the Leader from 2 years ago of her carrying out some direct action. “a tree was requesitioned for chopping down because a neighbour didnt like it obscuring the view and the slippery leaves on the pavement. ” I grabbed my ladder and pretended to hang myself from the tree. I wrestled with a workman with a chainsaw” she claims. “Theres so little green around, if you havent got green you havent got a soul.” The protest was a success and saved the tree “I was an eco warrior once. I stood for election with the Green party but the papers never went through”

Liz breaks into song again and waves at a young couple passing by “I wanna laugh laugh laugh til the grave! My biggest regret is not having enough sex. You’ve got your drugs, you’ve got your drink, for me it was la Petit Mort , sex as the French call it.”

Of her life now she says ” I’m killing time. Waiting for Godot. The Elysian Fields.I’ve gone over my span, filling in the days. People have too high expectations and when this doesnt happen, people become disappointed and mentally ill. The more intellect you have, the more artistic you are, the more you feel things” Has she had a battle with depression? “I’ve had a battle with LIFE dear!”

“Where are you going to put this interview? I dont know anything about twitter, twatter, twotter… I want to bleep technology to smithereens!”

With thanks to the staff at Marmalade

2 Replies to ““I think its better than a lot of places, we could be in the Potteries!” A chat with Liz”