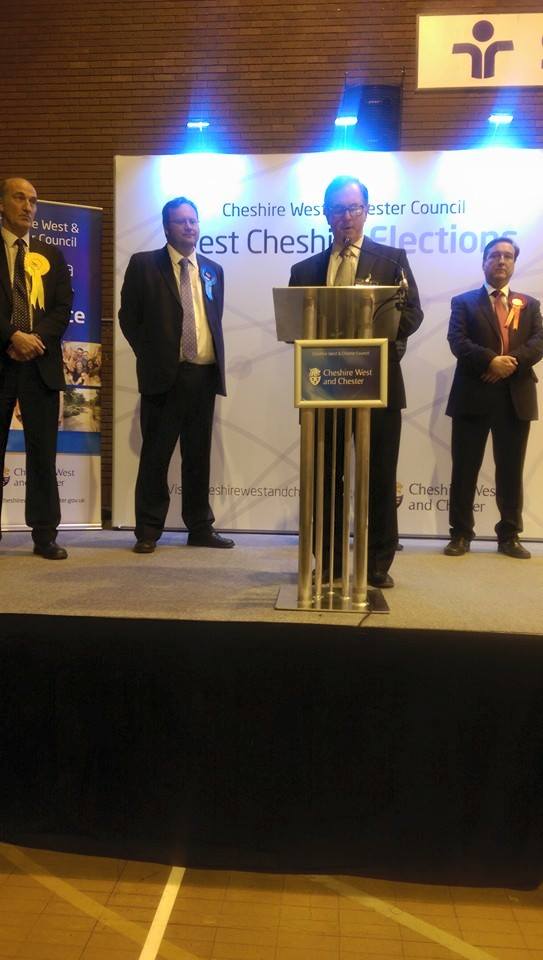 written by @shitchester, based on an idea by Tony Chester and Ben Hultum

instead of a factual description of events.. heres a stream of consciousness effort covering thoughts, feelings and observations from the 10pm til 7am parliamentary vote count. It is semi fictionalised, so quotes from real people may not be true. Please don’t sue me. Also contains one use of strong bad language:

Tony: what are we gonna do for 4 hours?

John: soak it in

John: the atmosphere, democracy in action

J: spotted any yet?

T: oh yeah, look, you’ve got Jill, youve got Razia, youve got Matt Bryan, techically he’s not a councillor though

J: they’ve sealed the tables with gaffa tape so the slips dont fall through, whats going on there?

(ballot box tipped out onto table)

(enter media room and look blankly at TV into the void)

(stand aside to allow police officer to exit room)

T: Gavin Matthews has retweeted.. look at that frail old lady, she should be tucked up in bed.. hang on don’t put that its very ageist.. Oh look its Sam Dixon… Sam! Sam! Sam!

She just walked past Razia there, with her blue bomber jacket on.. hang on is it a puffa or a bomber?

Mark: Its an interesting perspective for you because you’re not involved in politics and youve not witnessed the count before,, you’re seeing it from a different viewpoint from us down there”

Journalist 1: what shall I call you? Im doing a blog.. you;re almost like a celebrity but no one knows who you are…what..do you want to be known as..?

Journalist 2: Are you sure you don’t want to do this as a love story.. “I caught her eye over the postal votes, a really fit member of the counting staff”

Tony: we’re eternal observers, the outsider on the inside, we’re above all this, we’re not here, but we’re everywhere…erm..

….at least we’re not in unrequited love

.. So they’re saying the turnout could be as high as 70%.. I think thats great. Im happy with that , but you wonder about the other 30%.. what are they doing with their lives?

J: at the races probably

T: no photos allowed, lets ask the count staff if we can tweet this sketch..

count staff: Oh i’ve never been asked that before. I will go and check! (returns) thats fine, if anyone really kicks off, we will have a look at what you’ve drawn 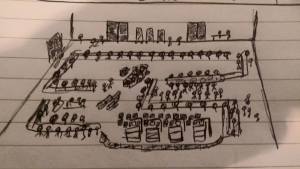 overheard dialogue: Just to let you know they’re not starting the count until 3am.. it should be 430am for the result…

J; you walking home after this?

T: yeah, I think so, theres no buses until 7am.. if we get out by 6 we could go to Maccies for breakfast, the rock and roll lifestyle that we’re living.. It feels like a movie doesnt it

J: did you have tea?

Oh look theres Carlotta Dunn again, over there in the corner she probably doesnt recognise me without the sunglasses. And Sam Dixon chatting to Steve Robinson. Lets go down and say hello

Sam Dixon : but do they know who you really are, the mild mannered alter ego??..

T: Matt Bryan, do you want to say something for our post modern blog?

Matt: Im thinking of reinventing myself as the organiser of Vegan Crunk nights.. no don’t put that !

T: look at this, 6 cups of assorted tea/coffee, its like the vodka incident all over again.. what scenes can we observe?

Journalist 1: Can I do a picture? I’ll try and get you looking relaxed..

T: all those bits of paper and they havent lost any. They must be very high quality boxes.

J: high storage quality? Is that X in the hunting jacket? Is that him’ I’d rather see him, than face from the past wouldnt you..I’m getting wired, I need some coffee

J: Do you think they’ll ever have a digital voting system? Thats quite an interesting debate isnt it

J:too much margin for error

T: yeah system failure, and sytem failure is a metaphor for…… societal collapse…

J: by sheer accident, how did we end up here? People that shouldnt know us, do. Its mental

T: I dont even know who I am to be honest.. are those press on the raised area, they look like they’re on work experience.

Overheard: based on John Murray’s data, at least he uses data, not just waving a finger in the air

Steve Robinson: we are now opening box 16 in the borough election

J; whats your vision for this then, the script?

T: well I think it could be good as a short play, get some hot shot drama type to make it all ironic and that , edit together and stick it on at an open mic… name the actors?

J; they’re a bit like a factory of thumb lickers.. moist, thumb stroke

T: through pages of crosses, kisses. Period,as the Americans say

member of cwac: have you got a knife I can cut this wristband off with?

ex member of cwac: I get all my news from @shitchester

T: I’m finding it emotional just being here, to be here is a massive privilege

cwac candidate: you did very well, going out for cocktails and then coming here..

Mike Jones… hello.. what was your name again? How did you get in by the way?

T; oh, guest of a candidate

Mike: well you know I dont like the name of the account, but I think you’re a good citizen…

( after 2 years everything is changing )

and the history book turns to the next page..