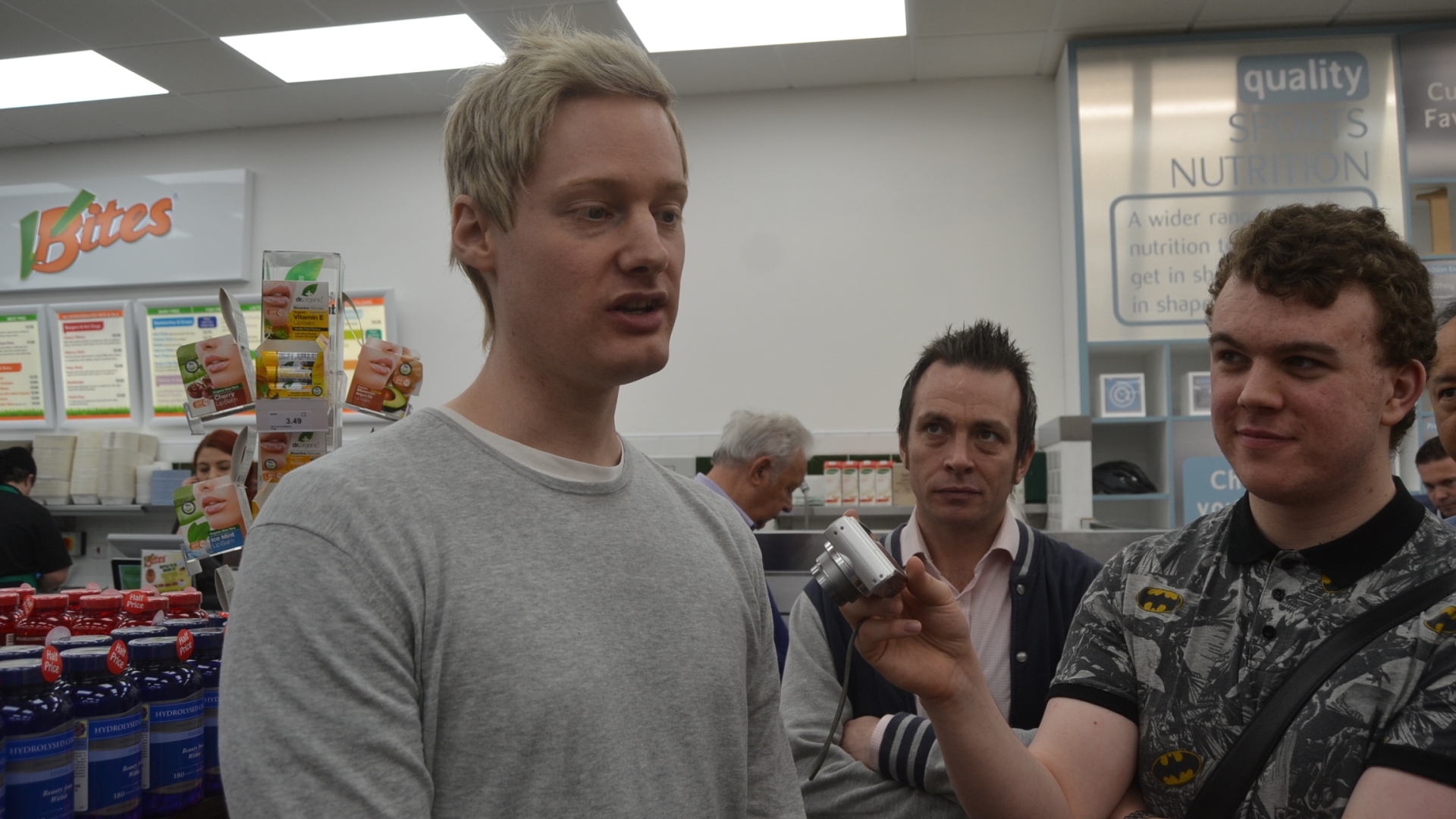 Following on from the Chester unlocked press launch the team headed over to the new Holland and Barrett on Foregate st to see Heather Mills promoting chicken style nuggets and other delicacies. After one hour she hadn’t emerged so we took the chance to chat to the man currently ranked the 4th best snooker player in the world,  Neil Robertson :

Kate Northcott : So what I’m really fascinated in, is you have a plant based diet, totally vegan

NR : Erm yeah, according to some !

KN : How did you get involved in V bites, and working with Heather today?

NR: Ever since I’ve been on a vegan diet, ive been interested in that and ..

@ShitChester : How long have you been a Vegan for ?

NR : Since November, so about 7 months or so erm initially it was for health benefits and looking for something new, trying to gain an edge. I do professional snooker, a couple of percent can make a huge difference

KN: Has it worked?

NR : I believe so yeah, I’ve won a tournament being on the diet, and ive noticed a big difference in the amount of hours I practice now. I maintain my concentration for longer periods of time

NR: I completely ditched coffee, I used to be someone who had 4- 5 coffees a day , I dont need it anymore! No alcohol.. maybe the occasional glass of wine. If we were having this conversation in the 80s, you’d probably be talking to someone whose 20 stone overweight or something and probably have a pint in his hand! Haha

I guess you know, if you look at over 90% of winners on the tournament tour, they’re all slim guys who look after themselves, Its not a sport where its suited to putting on muscle mass, you need free movement in your arm. So , yeah .. I did it to try and gain an edge. My concentration has improved and I have created more spare time in my life, Ive got a little boy who’s five … so I can spend so much more time with him, I dont get tired anymore. I can relax, pick him up from school and go and run around with him for a few hours . I wish I’d done it.. I wish I’d been bought up on it, but y’know ten years ago , for sure.

KN:  What are the stats for how many vegans there are ?

NR: I heard its the fastest growing diet category so there are more people doing it..and more sportspeople doing it I’ve spoken to professional athletes who say that their recovery, is so much quicker than when they were eating meat

KN: What about protein ?

NR: Well everyone thinks you need protein, but there is protein in everything you eat, Things like nuts and lentils… oats and all these sorts of stuff

KN: Where do you get your fats from ? Not anywhere, fat free zone!

NR I’ve lost the fat from the harder areas, the chin, the waist area…i use coconut oil to cook with, some people only use it as a moisturiser  ..

KN: how have you got involved with Heather today ?

NR; I got in contact with her about 3-4 weeks agao, and she was quite intersted that anther person has joined the club, so to speak. I live in Cambridge.. and this place just opened 5-6 weeks ago

KN: V bites is a great concept. Thank you very much !

Heather later emerged and joined Neil out on the street with the nuggets and other Vegan products. VBites is the world’s leading manufacturer of vegan, meat free foods and are kosher and halal accredited. They distribute to over 24 countries worldwide, you can enjoy the products from Holland and Barrett or shop online at http://www.vbitesfoods.com/

Here’s Heather with a giant owl :

One Reply to “Interview with the snooker player”