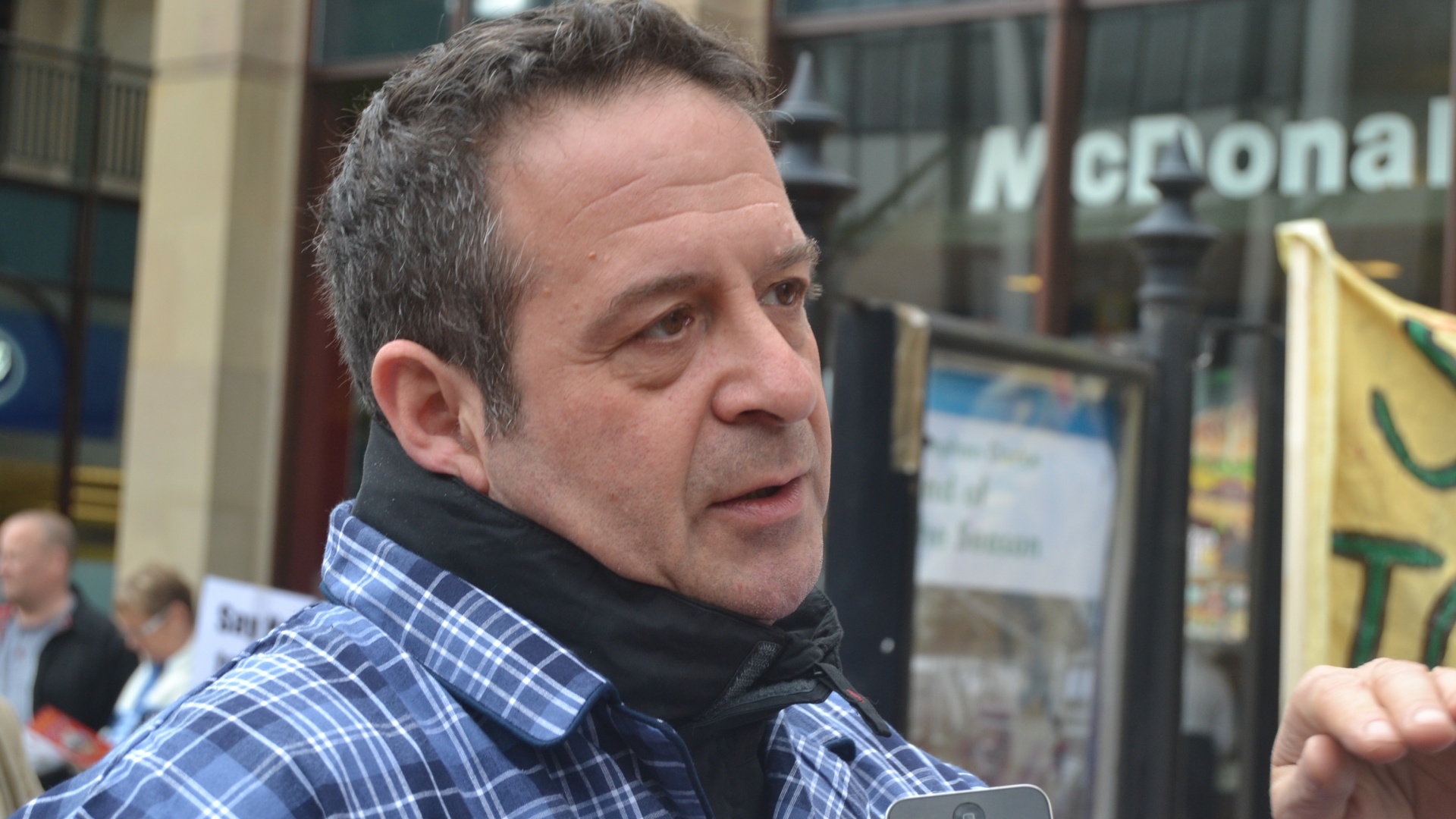 Comedian Mark Thomas organised a protest in Chester today against the new Public Space Protection Order (PSPO) which the council are currently consulting  upon. The controversial PSPO has been poorly received on social media with over 7000 people petitioning against the proposals which cover rough sleeping, busking , bird feeding and legal highs  https://www.change.org/p/cheshire-west-and-chester-council-don-t-make-life-harder-for-the-homeless-don-t-criminalise-your-buskers   Mr Thomas had  called for a satirical demonstration to highlight the plan to fine homeless people £100 if they lie down or sleep in a public space within the designated zone. The council have previously denied the plans are designed to criminalize the homeless . The protest was also attended by members of Soul Kitchen , Chester’s  community kitchen and busking campaigner Jonny Walker. 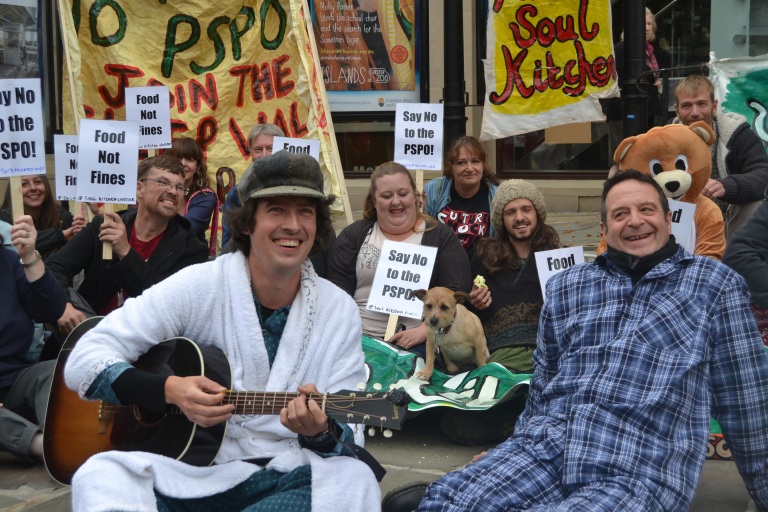 Before the protest Mark Thomas explained to the media : “Its going to become illegal to lie down in the street. or sleep in the street.. just from a point of view of  civil liberties that’s nuts.. .Looking at it from a homeless point of view , what’s happening will just criminalize the homeless who haven’t got a lot of money. They are going to get a hundred pound fine just for sleeping, which is ridiculous. ”

One opposing voice confronted the  protesters on the grounds they were” not from Chester ” :

With Johnny on the push along bed, the party set off down Northgate street with a musical accompaniment and cries of “Say no to the PSPO” .  Following the boundaries of the proposed protected area, the “loitering” event was well received by passers-by, and a mass sit down in front of the Council HQ building passed by peacefully and without incident.

Passing through the Groves, Jonny Walker and other musicians present performed an impromptu song underneath the now restricted Bandstand area. In a surreal turn of events, a newly married bride and groom were being photographed in the area and were happy to get involved. The groom had previously made a donation to Soul Kitchen before the start of the walk.

“One of the most relaxed protests I’ve ever been on” said Mark , at the end of the two and a half hour walk.

Mark  explained how he heard about events in Chester ” The PSPO is something that is happening across the country , and there are a number of places that collect information about it, including Keep Streets live , Liberty… Chester’s one became quite well-known because it was so outrageous because it was about lying down and sleeping . It’s quite iconic amongst us, because you find out about Birmingham and Kettering, Hackney and Oxford.. In Oxford we had other stuff we had busks, we had chalk on the pavements… ”

He said the walk was ” great, there was a lot of support along the way which was really nice. I think we made the point in a colourful way, a symbolic way. Whats really interesting was the number of homeless people here , as well as people who work with them ,as well as people from the community who are just angry about it. It had a sort of pluralistic demographic to it.. the news are covering it, and they’re raising the issues and the concerns, its great.”

Jonny Walker who has criticised  busking controls in other cities via the Keep Streets Live campaign has been a  vocal critic of the proposals since day one. The council have said that the measures will differentiate between buskers and beggars, but critics have reacted angrily to suggestions that buskers would be subject to quality assessments or licensing.

Jonny : “I think its been really heart-warming. a demonstration of the best of Chester. A vibrant community of people who care about the civic responsibility and public space. It’s a big thumbs down to the proposals, these proposals aren’t coming from Chester, they are alien to the culture.. The people of Chester have shown their true colours here today. ” Of the PSPO he said  ” My impression is this is not being driven primarily by the Labour group.. it was a police report that originated under the Tories, its been waved through to consultation without adequate scrutiny. To be fair to the  council they are conducting an open and honest consultation” However he criticised the role and influence of the CH1 Chester BID :”  Business improvement districts need to be subordinate to local democracy. What concerns me is the politicisation of the police force and what’s effectively a lobby group , lobbying for a law that would criminalize the most vulnerable in society. For the future of Chester, we need to look at the way the BID is influencing policy and bring that back into an  accountable area. ”  Having campaigned successfully against similar measures in Liverpool he said that “it was called a  street activity management plan, that was a  BID initiative.” The Liverpool proposals would have seen trespass orders for buskers without insurance or an ID card… “People in Chester have to ask themselves do they want to live in a city that’s modelled on Cheshire Oaks, a private shopping centre, with security guards bumping undesirables out of the area, or a vibrant cultural city that is open to anyone regardless of their background?”

The PSPO consultation is online at http://www.cheshirewestandchester.gov.uk/default.aspx?page=17711 and runs until the 15 October.

One Reply to “Mark Thomas and the PSPO”