SC talks exclusively to Jade Barrett of  the family run, Ginger wine bar and delicatessen which will be opening soon in the former Harvest Moon premises on Northgate st. 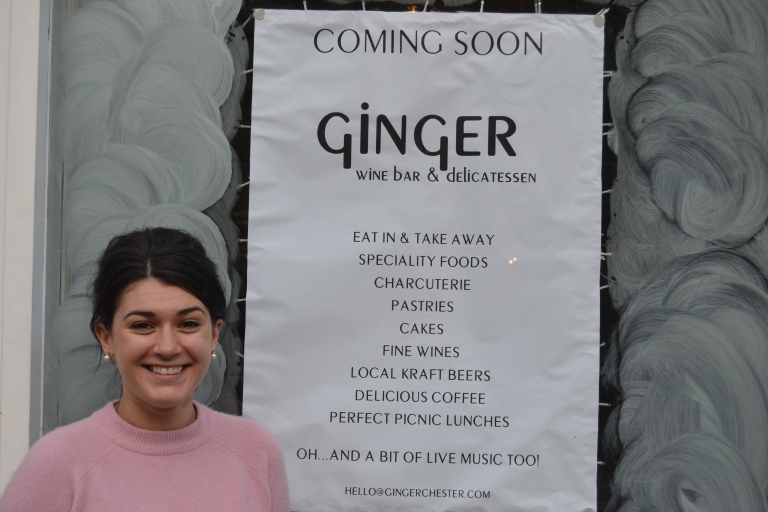 “I’m from Chester . I’m 26 years old and I’ve lived in Chester all my life, apart from a year in Madrid!  The business is called Ginger wine bar and delicatessen, the ideas been in our heads for ages.” Jade worked for 7 years as the  fundraising manager for the Clatterbridge cancer charity. After a stressful week she used to say to her family,  ” I don’t want to go out for a massive meal, I just want to pick at some cheese, have some nice bread, relax over a glass of wine with some nice music.  We wanted somewhere really chilled to unwind…

“I always said I won the lottery I’d open this wine bar.” Jade’s partner  said she didn’t need a lotto win and encouraged her to look into her options. The process began about two years ago when she sold her house to fund the business and moved back with her parents. Her mother Sandra had battled an aggressive form of breast cancer and after winning the fight she told Jade that :

“Life’s too short I’m giving up my job and doing this with you!”

Jade says that she doesn’t know where the name “Ginger” came from..” it just seems to tick a few boxes, linked to food. We have a really nice local lady making gingerbread men for us, there will be one served with every coffee. We have a copper theme going on with the tables and the décor.

“I’m a huge supporter of the independents in Chester. Her grandparents ran the Marlborough pub  for  years and her parents later took over. Jade lived there until she was 10, describing it as a “great family pub”
“We’re very proud Cestrians, we know lots of people running independent businesses, our friends run the Chefs table, lovely Dawn at Marmalade, all the guys at Baristas. Costa churns out great coffee, but I just want us to thrive. Id be very keen to team up with other local independents to encourage people to shop local.

The food will be sourced locally. “the idea behind it is takeaway like a regular deli or take a seat and enjoy over a bottle of wine or coffee. There will be cheeses, charcuterie, breads, pates, lots of pastries, homemade sausage rolls, tarts. Dad is a famous fisherman and he is catching all the fish for our pates. My mum is a qualified chef and has run Chester Catering for 25 years, she’s doing all our cooking. What we can’t cook ourselves will be locally sourced, Each item of food will tell a story, we have some framed pictures for the walls saying “meet the folk that make our food”.

“I know people have fond memories of Harvest moon and that they have a local customer base. I hope that they will enjoy what we’re going to do . We took on their lease.. I’ve heard people say “one of Chester’s best coffee shops has closed down” and we hope that we can replace it with another family run business. We’ll be offering the same coffee service. The business has a music license which we will use, we’re really excited. It’s a reasonably small space, we’re redeveloping, pulling out the chunky bar to maximise space. We can get around 30 people in there, we’re going to have acoustic local music.” Jade is keen to work with local buskers and involve local talent, and will consider doing an open mic night, which was so successful for the previous tenants. Its perfect timing with the theatre coming to Chester. We’ll be doing pre and post theatre deals.”

Ginger sounds like a positive addition to Chester’s independent scene and  will be opening in early November,  trading from 8am until 10pm .Follow them on twitter @Gingerwinedeli for updates

Big thanks to Jade for her time !