The long talked about  Northgate development is back on the cards, after over 20 years of delays and false dawns. The Northgate area currently contains the ageing market, as well as The Forum shopping centre, disliked by many due, despite the cheery radio advertising, due  to its high proportion of discount stores and until recently, vacant units. Chester’s legacy of bad planning decisions dates back to the late 1960s with the demolition of the historic market hall and its replacement with the concrete mass of the shopping centre and council offices.

Now the developers and council are finally seeking to transform the north west quarter of the city, with all new shopping areas, along with residential zones, a new market and a multiplex cinema. The previous plans were put on hold due to the 2010 economic crisis, but the council purchased the land in 2013 and the proposals are going before planning in the spring of 2016.

The currently unnamed cultural centre is on target to open in under a year, and construction has started on the new “world class” bus station. Once that’s built, the next phase can begin , with the cinema, market and hotel expected to be completed by the end of the space year 2019. Building in phases seems to logical and working well, with evidence of tangible progress.

The new market with a “focus on food” will sit next to a market square, roughly where the current bus station/yellow shacks stand. To me this makes sense in having the indoor and outdoor market areas closer together, with the Christmas and Taste Cheshire markets being completely separate from the historic market. A resolution to the market problem is needed fast as the traders have faced uncertainty for years, it is unclear whether all will want or be able to move into the new unit.

A new department store will anchor the shopping district, with the developers saying they “are talking to people” and that there is “lots of interest”. The modern design for the department store, was widely attacked on social media for not being in keeping with Chester’s image. However at this stage it is only a concept design , and is likely to change. My personal view is that there is a place for modern designs as long as they dont awkwardly clash with the traditional styles. The store is at the heart of a modern shopping area and I wouldn’t expect it to be black and white wood, but no doubt many will disagree.

. The Chronicle recently reported that a number of national chains are interested in investing in the multiplex cinema, which will sit atop the market. The Crowne Plaza is all set to move onto the land currently occupied by the grassy mound behind the bus station. The utopian vision will be completed by 800 underground car parking spaces accessed via Hunter st and St Martin’s Way. There will also be bus stops on St Martin’s Way , with relationship to the main bus interchange to be confirmed.

David Lewis, chief executive of Rivington Land outlined the problem facing the city , with Chester’s drastic fall in the retail rankings over the last 30 years. Competition from Liverpool One, The Trafford centre, Cheshire Oaks and even Broughton has increased and the City has done little to react. “For Chester to be successful it needs to amongst the top retail destinations.” The new plan includes space for 41 new retail units, and it is hoped, will bring in new brands and allow existing brands to display a full range of stock. The recent departure of GAP is one example, and I was told that there is plenty of retailer demand for modern spaces. 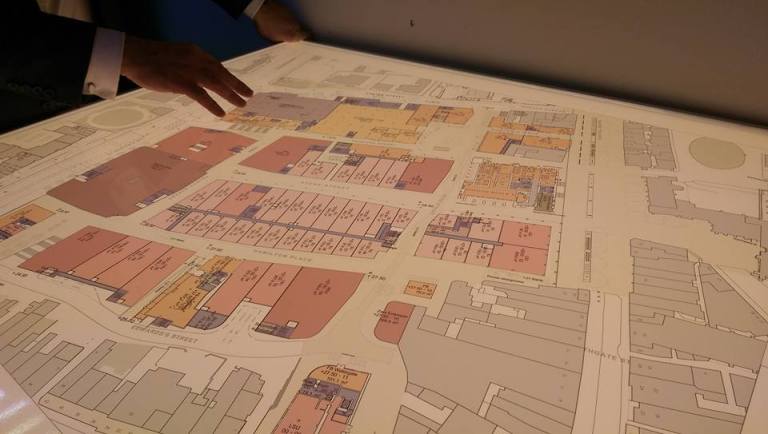 David said that the plans will compliment the city’s historical appeal, and looking at the detail, nothing historic is being lost. Few will mourn the loss of the Forum, and the market is in drastic need of an overhaul after years of decline. Citizens have been crying out for a cinema for years. Chester’s history and heritage is rightfully cherished , but that alone can’t make a prosperous city. The Northgate will hopefully re-energise shopping in Chester and make it a destination as well as increasing “dwell time” boosting local restaurants and cafes, while restoring some of the spend lost to Liverpool and “the oaks”.. if it all goes to plan. “Chester’s not going to get better.. Chester needs to bring the people back” said David.

One point I raised was the impact on Foregate st and the rest of the city. Rents on the new units are expected to be comparable with Eastgate st. Foregate st has suffered and is also full of discount stores now, which many say have “brought down” the city but, their popularity and market forces will ensure their trading futures.  With the high street struggling in general and the rise of internet shopping, will Foregate st end up as a forgotten “old town?.”  The anchor stores on the street are not expected to move, and one possibility could be that rents will have to fall , potentially allowing independent businesses a better chance of a foothold. The proximity of the new bus station would also be expected to boost trade in this area.   I remain optimistic given that the former M&S units have been filled by Wilkinson and River Island. The old Wilko meanwhile Is being taken over by B&M. Shoppers and tourists will always visit Eastagte St and beyond to see the clock and access the walls, amphitheatre, and river.

Trade to Eastgate should also be boosted , due to the creation of a new gateway via the removal of part of the modern section of the rows, This originally included Costa and the adjacent building. However Sainsbury’s accquiral of a ten year lease has altered this.  The final scheme will seek to preserve row access and open up Watergate to emerging footfall from the Northgate and its shiny new shops… This impact is similar to the high end retailers found at the emergence of the rows onto Bridge st and Eastgate st via the Grosvenor mall.  (See video)

You can view all the plans at http://chesternorthgate.com/index.html and complete an online feedback form. The consultation runs until the end of January.

The long wait for the theatre is nearly over, and if we get a cinema as well, many of the moans about the city could hopefully fade away. Chester is a great place to live and work, but we can make it better, and personally I’m embracing the proposals.

6 Replies to “2021 should be a good year : Northgate development”