January saw the arrival of the Chester Dungeon (later renamed the Chester shop of Horrors for copyright reasons). A demonic clown was spotted prowling the streets , adding a bit of interest to the bleak mid winter, but the attraction failed to capture anyone’s imagination, largely because it was rubbish. An extension to its opening hours agreed later in the year couldn’t prevent its closure in the autumn. 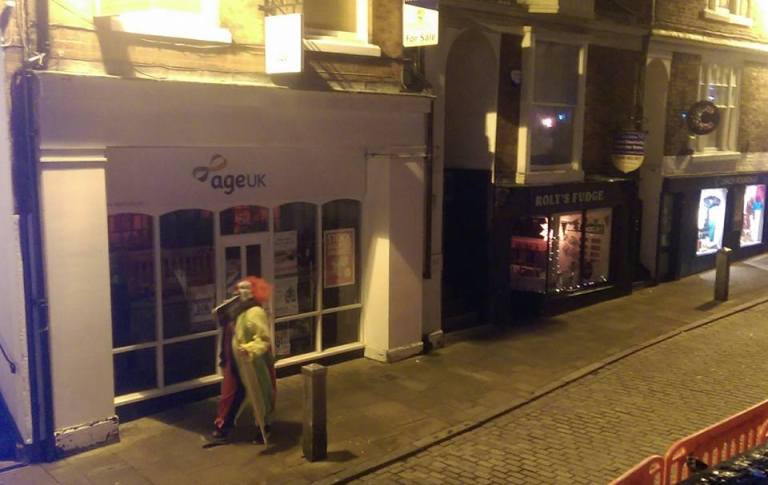 Hundreds attended the funeral of  RAF veteran Keith Nutbrown at Blacon crematorium after an online appeal. The 83 year old had died with no known friends or family, and the Chester public turned for a moving send off. The Daily Mirror later accorded all the credit to TV’s Vernon Kay , despite the message being spread on all the usual Chester social media channels. 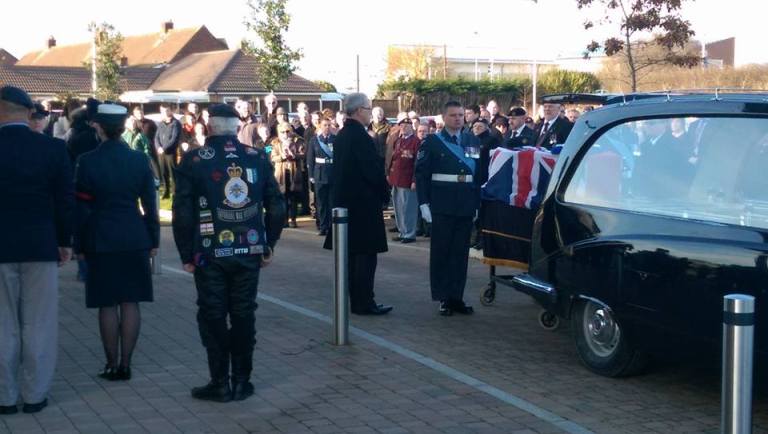 Meanwhile our first blog of the year took us to Ellesmere Port to find out about the great work being done at Endeavour, the “youth club for the older generation”. Founder Paula Collins told us how she provides entertainment and activities as well as food, twice weekly for clients, many of whom are lonely and isolated. This was one of my favourite blogs to write and the beginning of a more journalistic approach to the account.

Giant arrows costing nearly £4K were installed outside the market in February and were massively criticised for being a waste of money. After they were vandalised they were moved out of town hall square and put inside the Forum. The arrows were an expensive failure and embarrassment for the council.

Firecrackers and dragons bought sound and colour to the city in one of the first parades of the year. An annual event, the Chinese New year celebration was as enjoyable as ever.

Another  early highlight of the year  was the Tip Top productions’ version of Les Miserables. The talented young cast showed a maturity beyond their years, and had me singing along for months afterwards.

In March, Friends of the Walls featured in the blog, with Civil war tours and artist John Donnelly exiled in King Charles’ Tower during the repairs to the Eastgate clock. The difficult and expensive task of walls maintenance was under the spotlight , one of the down sides of living in an historic city- with the pot of money not being endless. It only took ten months to repair the clock, and the section at the Northgate has been scaffolded for nearly 2 years.. We await further developments.

The eclipse provided a moment of unity as Cestrians looked skywards with their special solar glasses.

Kier Construction opened up the Odeon site for a chance to see the foundations of the new theatre and arts complex. For me it was moving to see the shell of the Odeon with some of the fixtures still there, lost in time, a reminder of countless visits as a youth. And  while we still wonder why Chester apparently cant support a cinema of its own, it was fascinating to see how the past was being shaped to  build the future.  Also of note, bird man Bill Oddie visited the racecourse, the first celebrity visit of the year.

April saw the annual food festival, also at the racecourse. Gregg Wallace was one of the stars in attendance, long with master cheesemaker and ex Coronation St star, Sean Wilson.  Another success for the city with thousands attending over the course of the three day event. Also in the food world, Wayne Walker meat opened in the revitalised Forum, and “Ashley and Kirk from Coronation st ” were on hand to endorse the budget retailer.

Chester music theatre in Boughton  hosted a mini Hare Krishna festival, which was a chance to find out a bit about the faith , as well as enjoy some beautiful music. After a fairly quiet Spring, the notion of “throwing my arms around Chester ” was back with a vengeance. Beating all other local media, the blog also covered Tesco’s ground breaking introduction of “dementia friendly ” tills.  (See https://shitchester.wordpress.com/2015/05/19/dementia-friends/)

An epic row with an annoyed resident who hated the city inspired another blog, and a period of introspection and soul searching for me. With so much activity it was hard keeping up , and the range of activities begged the question of whether Chester was still “shit” after all?? I found myself often acting, ironically as the defender of the city against its opponents, as well as noting the merging of my own identity with the account. But no matter, we had the launch of the lego Cathedral, a huge scale model expected to take several years to build.  My own lego model in the market continued to grow, and as the election bandwagon rolled into town, John Prescott visited with Labour candidate Chris Matheson. 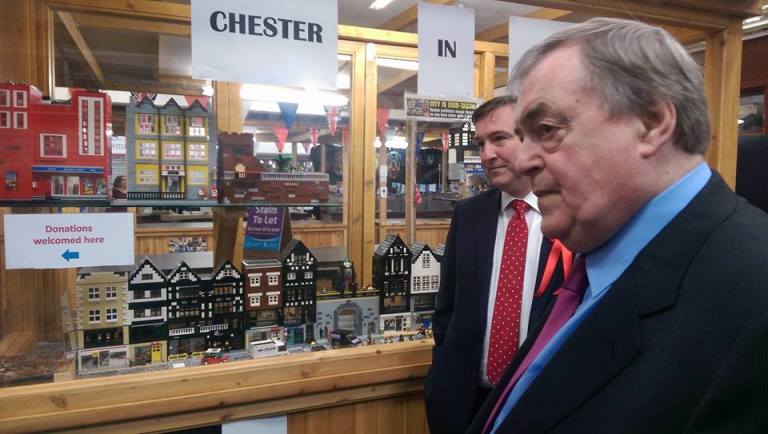 The former deputy PM admired the model of Rosies, or Quaintways as it was known when he worked there. He met his wife there, he said. The Labour heavyweight also admired the model of the soon to be doomed Platinum lounge, before continuing the campaign trail and getting into a row with a passer by at the Cross.  Other Labour visitors included Ed Balls and Eddie Izzard before the arrival of the great Leader himself Ed Milliband. Contacts enabled the SC team access to the Labour camp:

A chance meeting with Boris Johnson followed, attracting a crowd as he entered the cathedral with Stephen Mosley, and then posed for photos in the Kaleyards, and all along Brook St. David Cameron also visited but no one in the Conservative party let us know..

With its marginal status, the media descended including the 6 o clock news, with Alistair Stewart broadcasting from the Cross. A later broadcast for the 10 o clock edition was marred by some shouting and anti social behaviour.   The result in Chester was  widely expected to mirror the national election result..(It didn’t)

In non political events, a flagship Holland and Barrett opened in the former Waitrose unit on Foregate st, fighting against the tide of budget retailers which many damn the street for. One of the best shop openings of the year, featuring an array of costumed characters, the ever present Town Crier and Radio 1 DJ Jameela Jamil.. Eastgate st was taken over by an allergen free picnic area , and the date clashed with another fantastic St George’s Day parade. 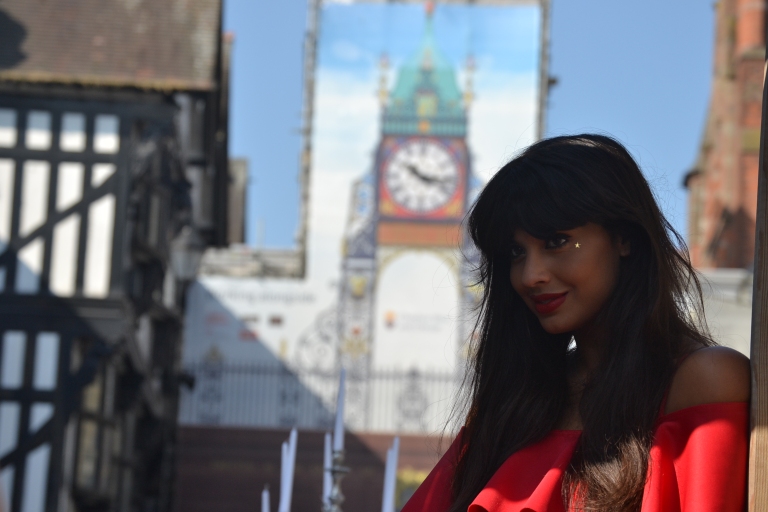 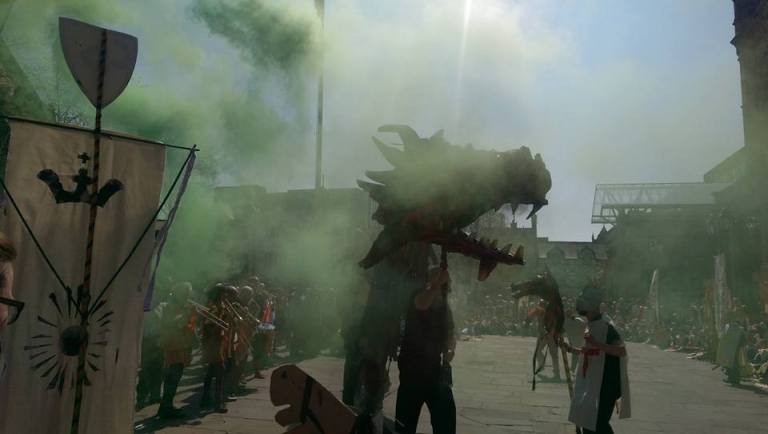 Election night in May has to be the epic highlight of the year. In the interests of impartiality SC met up with candidates from the three main parties standing at local level. The 9 hours in the parliamentary count were a surreal privilege, and at approx. 3am in the morning contact was made with former nemesis Mike Jones. The atmosphere in the yellow tinged Northgate arena was surreal and electric, and I enjoyed the experience of seeing democracy in action. Photography was banned but sketching was allowed, one of the election official informed me. After a recount Chris Matheson emerged as the winning candidate by a very small margin. Going out  into the  morning sunlight was a relief, but I was back later that day for the equally epic local results with the fate of the borough in the balance.  Sitting in the press area with my friends from the Chronicle and Leader , the evolution of SC from its lowly origins was confirmed.

“Currently quite relaxed” said Cllr Jones before the result was announced.

The Cwac press office officially recognised SC and gave us access to the press area where photography was permitted, allowing us to capture the defeat and the victory. Access to the subsequent press conferences was also granted. Regretfully there was no formal blog, due to the pressure of the 3 day count. Instead there was hundreds of tweets announcing the results, and an abstract blog (https://shitchester.wordpress.com/2015/05/12/the-count/) which was variously described as “Kafkaesque” and the “worst piece of writing ever”. With a new council in place, this very much had the feeling of a  series finale.

B &M opened up a second store in the city on Sealand Rd. Amazing how possessing a “big camera” can gain you access as we interviewed the regional manager of B&M… It was also one of the first official engagements for new Lord Mayor Hugo “denim jacket” Deynem.

In June we were the guest of tour guide Liz Roberts on the “secret Chester” tour. A great tour for Cestrians and tourists alike, including a rare and depressing look inside the ruins of the castle… What might have been!  I was also privileged to interview the actor Peter Edbrook about his memories of the old Chester theatres, as well as a feature on the mental health charity, Chapter Chester, as part of their relaunch. This interview , conducted by Kate Northcott,also featured on one instalment of the semi successful SC social on Lache FM/Flipside. The early summer edition was co hosted by journalist Carmella De Lucia and local businessman Graham Turner.

Another press invite to the Chester unlocked press launch followed. A great innovation by the BID and BIG heritage, with unseen artefacts being displayed in shops and businesses across the city centre. Team member Dan Schott was delighted :

On the very same day, snooker player Neil Robertson was plugging vegan bites in Holland and Barrett, and once again we blagged an interview. Vegan food boosts his performance he told us. The main “attraction ” was model Heather Mills who was force feeding passers by , “chicken style nuggets” watched over by a giant comedy owl. It was one of those days when you just have to love Chester and everything that goes on…

The Chronicle’s headline that Northgate st was the “28th worst street” based on crime statistics inspired plenty of debate and memes, and also a new T shirt design by our good friend Carrie from Becnicks.  Other June activities included another successful Chester Fringe, and TK Maxx moving into the Grosvenor Mall- Town crier again on opening duties.

The big event was Terry Wogan’s visit to several venues across Chester for a travel/food themed show. Thanks to our network of informers I knew where he would be and managed to have a brief chat to the TV legend. A paranoid BBC researcher forebade blog publication unless it “spoilt the surprise” even though they had issued press releases to everyone else. The show aired in September and saw Wogan at Telfords, the Kings Head, tea on the walls, the Cathedral and other venues. Terry also met with parade organiser Russell Kirk, reflecting on another joyous midsummer watch , the streets packed as ever. Something that just doesn’t happen in other cities….

In part 2- PSPO uproar and Coke-ageddon