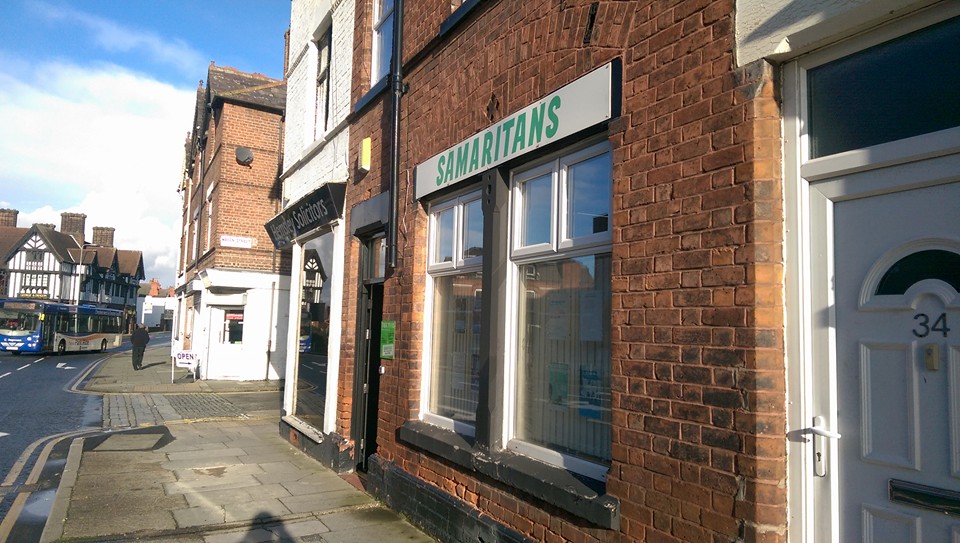 “Hello , Samaritans can I help you ?”

The Samaritans were founded in 1953 by London vicar Chad Farah. He conducted the funeral of a young girl who taken her own life when her periods had begun. Feeling ashamed and confused and with no one to turn to, she believed that she had contracted an illness. Chad believed that if the girl had been able to talk to someone , she would still have been alive.  He opened his door to anyone who wanted to talk. The Samaritans network grew from there. There are now 201 branches over the UK including a festival branch which operates at Glastonbury and other festivals and a correspondence branch that deals with letters and emails.

The Chester branch has been operating for over 50 years. Originally located on Lower Bridge st the charity now operates from 36 Upper Northgate street. Volunteer and publicity officer Sally, who joined the team in 2009, very kindly gave me an overview of the work done by The Samaritans and the help they offer to those in need.

“I had this idea that everyone that called Samaritans was literally on the edge of a cliff or a bridge and about to end their lives. We do get callers like that, but they are not the norm, Its one of the strong messages to get across, our strapline is “talk to us”. people who are distressed, worried or anxious call us, you dont have to be suicidal.  If people can talk to us we can help them explore their options, evidence shows that we can show them there is hope.”  In 2014 the branch received 19,947 telephone contacts :

“We have three people on shift this morning, answering emails, phonecalls, texts and face to face callers.” says Sally.  “Anybody, doesn’t matter who you are…life can get difficult for you. That’s the nature of life. Sometimes its helpful to talk to someone anonymous who isn’t going to give you advice or try and persuade you to do something, or tell you to pull your socks up, that can be really helpful…The person you’re talking to isn’t interested in the outcome, its not like a parent who wants a child to do well in an exam .. We can be there just to listen and help people explore their situation and come to an understanding.

“We get callers from any age and backgrounds… Theres no one standard caller. You never know what you’re going to get when you open an email or a text. Some people have lost the person that they love and are very lonely, they just need that empathetic voice at the end of the phone to help them get through the day. Other people have problems and just need to speak to someone to have  a bit of normality. People could be depressed, dealing with debt, problems at work, peer pressure…

Sally says she gets a lot out of volunteering:  “We get very thorough training and there is a very good social life and support from your colleagues. You learn a lot and you make a difference.  We do a variety of shifts, some days covering 24 hours .. At 4 o clock in the morning it can be quite a lonely place. In the branch there are always at least two of us, but when you’re on the phone its just you and that person. It is quite intense depending on the nature of the call, some calls might last three hours… We stay with them. At 4am, things that you might be able to put into perspective during daylight hours… its harder at that time.   Our busiest time is between 2-5am.  It all comes to a head in those hours.

“Christmas is always a difficult time,  theres a lot of pressure for people to have the perfect Christmas. People are under pressure to spend money, and are under a lot of pressure. Families come together and there can be arguments and fall outs. And for those people that haven’t got family.. Otherwise you never quite know… it varies.  If something has happened , like David Bowie passing away…Princess Diana. You will get callers talking about that, it has brought up other feelings about what is going on in their lives.

“Every penny raised has to be fundraised” The average daily cost of providing the service is £75 a day. The Friends of the Samaritans assist with fundraising,street promotions or in supermarkets. “We organise events, we raffled a car.. The really good thing about the fundraising is that every opportunity for publicity is an opportunity for outreach as well. The person passing the collection tin on the street, is a potential caller and a potential volunteer.”

On average there are  100 volunteers on the books. The day is split into shifts and every shifts need at least 2 people on duty. “Samaritan volunteering isn’t for everyone, you need to a good listener who doesn’t give advice. We are trained not to give advice. You have to be able to unload at the end of a shift.. You have to be able to leave a difficult call here, you are not allowed to talk outside the branch. You might have a distressed caller who could be about to end their life. At the end of that call, you will never know what happens and you have to be able to deal with that. We have quite a high turnover, but have some volunteers who have been with us for over 25 years…

There are regular open evenings which offer the chance to meet volunteers and learn about the service, the next one being on the 26th January. Volunteers are expected to work one shift a week and one overnight shift per month. Sally says that people volunteer for a variety of reasons. Sally’s friend at school ended her life and made Sally want to give something back.. “People say they didn’t see it coming… I felt that maybe I should have been there for her..

“Some people will have phoned Samaritans and found it helpful and also want to give something back. People may have a counselling or psychology background, or just to meet new people and learn new skills.

The Samaritans also run outreach projects in the community including giving talks in schools about emotional health. They are happy to come and give talks to any organisation. Sally explained about the project with Network Rail aiming to reduce the number of deaths on the rail network. Volunteers have spent time talking to staff and volunteers and increasing awareness of the service. The training of station staff has increased their confidence to spot the warning signs and approach people who may be in need of help.

“As human beings we’re not very good at listening. People will talk over each other  or interrupt.. Samaritans teaches us to be better listeners. even just asking that question “how are you feeling” and meaning it.. Not just passing someone on the street and saying “alright”. You dont expect people to reply “no I feel terrible” One of the most valuable things that one person can do for another is just to listen to them …”

2 Replies to “The Samaritans”