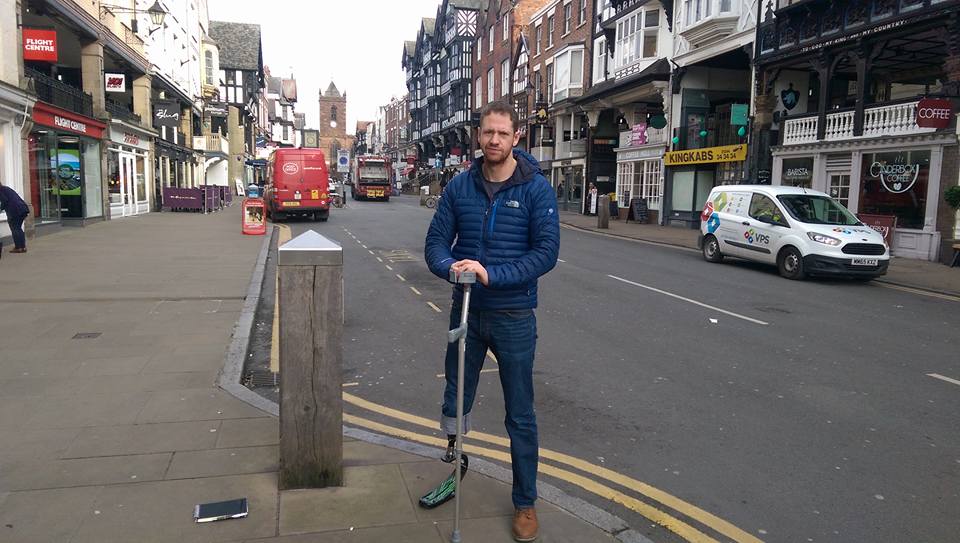 Peter Bowker was serving with the Queen’s Dragoon Guards (QDG) in Afghanistan in 2008. He sustained an injury which resulted in him losing his right leg at the knee. in 2015 he took part in the world’s first unsupported crossing of the Greenland Ice cap by an amputee. Having overcome great adversity in his life, he is now branching out into motivational speaking.

“I was 15 years old when I joined the army  in 2003. I did my phase one training at 16 and at 17 years old I was posted to Germany. At 19 years old I got my first appointment to Iraq. At 21 I was promoted and was in Afghanistan when I was injured. I was inside a vehicle called a Mastiff, like an armoured truck. It went over a roadside device, a bomb. Three of us got injured. I had my sniper rifle between my legs at the time and it hit my femur and badly damaged it…

“When the blast actually happened I was in the back at the right next to the door. I remember looking up at the corner of the ceiling and having no concept of the distance. My helmet had come  off, I landed on my back… I checked and saw that my leg was bent at 90 degrees, and my knee was bent, and my foot was bent completely 180 degrees. I tried to straighten my femur. I tried to stand up and fell back down”

“There was also two other lads who were injured. The vehicle commander had crouched down to change the radio and that’s when the bomb went off.  He eventually lost his left leg as a result . ” Peter said that a TA soldier attached to his unit was also injured in the blast and ended up loosing both of his legs. ”

Peter was flown to a hospital, his leg was badly damaged but was not  amputated until  2 and a half years later. He went into a year of rehab and then at the age of 25 he was medically discharged from the military. He says that there had been some “dark times”.

“I dont know what I did differently. I am the only casualty from my unit who hasn’t been to a counsellor, hasn’t been on anti depressants or hasn’t tried to take his own life. Unfortunately 2 lads from my unit have taken their own lives. There was 12 in my troop, and 5 got injured, 3 of them lost limbs. From the 7 that were Ok, one of them slit his wrists….

He says that support for amputees was lacking at the time.  “I was very frustrated by the system. I am originally from Connah’s Quay and I got discharged under the promise that I would be looked after with my prosthetic limb. I went to Wrexham prosthetic centre and they said they couldn’t maintain my limbs. My first 9 months as a civilian my leg was held together with duct tape. I was seeing a Kayaking company to get it fixed. I moaned about it and put in a complaint but I was told that nothing could be done. ”

A government report was carried out by Andrew Murrison MP which identified the gaps in the provision of care for ex soldiers with prosthetic limbs transitioning into civilian life. “An amount of money was then released to provide care for veterans. This got passed through England, but it never got passed through Wales. The Welsh Assembly sat on this money for about two years, and they never filtered down to the prosthetic centres. The result was that soldiers who were discharged, were going to their local centres with insufficient support. So then I jumped ship , moved to Chester and that gave me access to the English NHS. It was sorted within 6 weeks.” 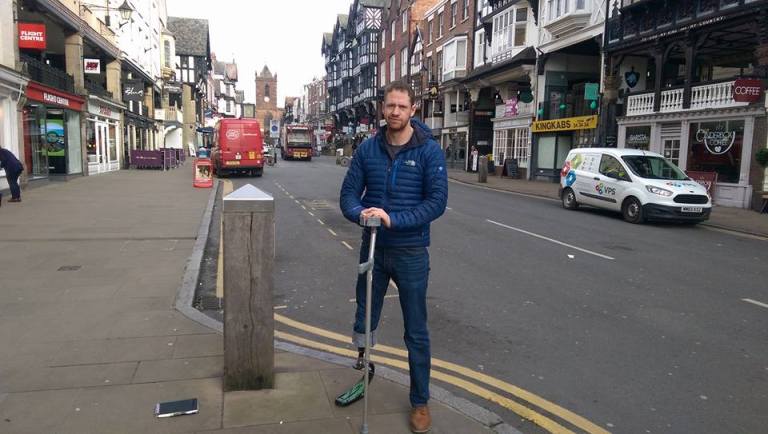 Peter didn’t want Afghanistan to define the rest of his life, so resolved to set himself a challenge. Prior to leaving the army he had carried out some Adventure Training in Greenland.  “When I was in the rehab centre, one of the officers said to me “Corporal Bowker you need to put your name down for some Adventure training. Put your name down for sailing.. boys there are going to the Carribbean, Canary islands, sandy beaches, beautiful cocktails,  they’re having a fantastic time”

“I put my name down for sailing and I got my join instructions and it was Iceland to Greenland… Not quite the sandy beaches I was promised! I said to the officer I think theres been some mistake, and in true army fashion he said” no theres no mistake.” He spent the last two weeks of his ten year army career in Greenland.

“We arrived at the most remote settlement called Scoresby Sund.. I climbed to the top of the hill and I looked inland to the ice cap. I saw the ice cap and thought “I want to ski across this”…I found out that no amputee had ever skied across Greenland and that’s where the expedition was born.”

The expedition 65 degrees North (http://www.65degreesnorth.co.uk/our-mission/) took three and a half years planning and received wide support.

“The campaign was supported by the Royal Family. My local MP invited me to Number 10 Downing street and we got a private tour. I went to 11 Downing Street and met George Osborne.. He gave us over £200,000 for the expedition, that was from the Libor fund when all the banks were fined. Other politicians got involved, and some celebrities including Ross Kemp and Amanda Mealing .  There was support from numerous organisations as sponsors including the All Welsh Truck and Transport show.”

Peter had never previously skied. The team of 6 who crossed 600 k of the ice cap from Kangerlussuaq in the West to Kulusuk in the East, was made up of some very experienced ex army and civilian personnel. Peter had previously taken part in a cycling expedition with project manager Richard  which raised over £100,000 for Help for Heroes. Peter travelled to another team member’s house in Norway who taught him how to ski ( in one day)..”A lot of  this was a wing and a prayer” he laughed.

The expedition, which was completed in June 2015  faced many perils ranging  from extreme cold to freak storms. Temperatures were as low as -37, and a storm in 2014 had cost the lives of 2 people on a previous expedition.

“Deep crevasses  nearly cost the life of one our team members on the last day. The only thing that saved his life was the sled that he was pulling, it got jammed, and he was hanging from a sheer drop. When it snows, a thin layer covers the hole and its like a trapdoor…

“The third biggest danger was the resident polar bears which have been known to kill men , We had equipment in place.. but the last thing we wanted to do was kill a polar bear. We might have seen some but they were so far away, they were specks on the horizon. It was an edgy day, we couldn’t tell…”

“The ice cap was barren. The only thing you come across is an old abandoned radio station from the Cold War. It was an early warning system for the Americans to detect nuclear missiles flying over the north pole. It was abandoned in 1986. Inside it’s very eerie. Its like the film “The Thing” Theres half cups of tea, food, its left in pristine condition..”

The expedition took 27 days , having been estimated at 20.The group had enough food for 25 days and were on half rations at the end. “We  lost 6 days to storms. I was running into problems with my limb, blisters became painful and I had to alter the prosthetic” The success of the expedition was a world record for polar expedition.

“The reason why the Royal Family, the Government and the sponsors invested in us was because they could see the resilience in myself and the team. My mind-set was that it was only going to be death or injury that would stop me doing this expedition. The sponsors believed in us and were willing to commit the reputation of their own brand and their supplies. Some big multi national corporations invested and it would not have been possible without them…

“George Osborne invested in us because of the work we did with community engagement and social responsibility. We visited schools, colleges, universities and other community groups to promote disability awareness and healthy living. We were passing on the message and I put together a power point presentation.” He has continued his community work and later this year will be meeting a boy who lost his leg in a car crash, and giving support and encouragement to him and his family.  He says that following the success of the expedition and having fulfilled his obligation educating and informing the public, he is looking to move forward in his life.

“With the gravitas of what’s happened I’d like to continue in a more professional capacity, and get involved with motivational speaking and after dinner work”

In life , Peter says that : “I think you have to have self discipline, you have to set yourself small goals that become bigger goals, you have to believe in yourself. It’s only going to be you that can help yourself, ultimately.

“I only had 11 months in Rehab. I fell within this red tape and the funding wasn’t there in the NHS. I really struggled at first. I eventually got a limb called a blade XT and enabled me to do a lot more sports. I ran the Chester Half marathon and took up other sports, karate, king fu, kickboxing and boxing. I could do a lot more on this limb….

“When these dark things happen, you have a choice mate.. You can either carry on, or you can turn to the drink and the drugs and the depression and its not a good way to do things. You’ve gotta have the mind-set, that suffering is part of life. We are all going to suffer and get down at some point..but whats gonna define us is what we do when those moments come. I’ve had a rough shunt.. but I went to war and I signed up for that. You’ve gotta be resilient and focus on yourself. It’s easy for me to blame the military, or the NHS, its easy for me to get angry and bitter. But the way I think about things,  is there’s always someone worse off .. In the first world war there was no such thing as a war pension. Those lads had it really tough and they cracked on. I am fortunate that there is a prosthetic centre and there is support out there. There are failings in the system, but ultimately what makes me realise that my sacrifice was worth it , and I have no regrets, is the fact that these charities are funded by the British public. On remembrance Sunday when I walked down the street wearing my medals, there was rows and rows of people paying their respects. People do care and they respect what we’re doing. ”

One Reply to “Getting motivated with Peter Bowker”