Good Friday saw a performance of the Easter story live on the streets of Chester. Directed by, and featuring the songs of Matt Baker, City Passion was a combined performance by by Chester Mystery Plays, Churches Together in Chester, Link Up, and Theatre in the Quarter.

The arrival of the procession including Jesus and a donkey down Eastgate street was heralded by the Town Crier David Mitchell. “The great thing for me is that the first ever mention of the Town Crier in Chester is from 1533. What was he doing?  Announcing the Chester mystery plays!” he commented. 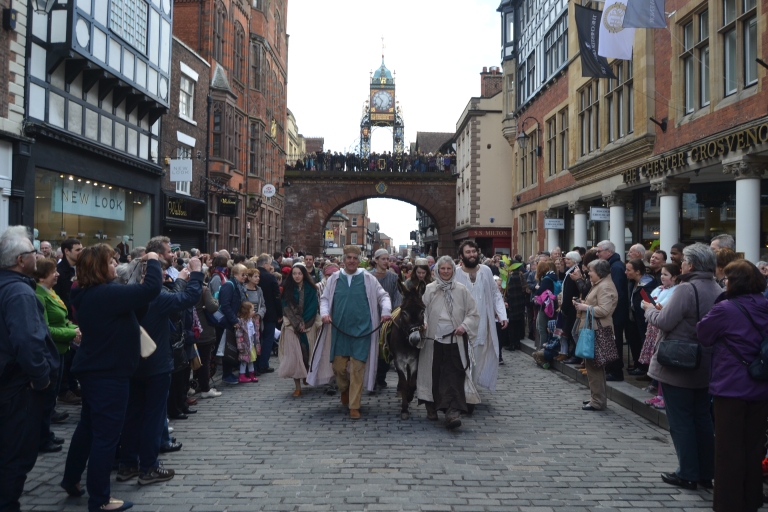 “Good people of Chester” he proclaimed “for the next hour Chester will be transformed into the city of Jerusalem 200o years ago”. Crowds lined Eastgate st with local schoolchildren and other members of the company waving palm leaves as Jesus arrived at the Cross.

The Passion featured a compilation of songs written by Matt Baker and used in previous cycles of the Mystery Plays, with the next scheduled for 2018. Also present were the drummers of Karamba Samba , whose drumbeats added a foreboding feeling to the event.

Making great use of the space, The Last Supper took place on the rows, conveniently close to the Pound Bakery, with Jesus and his disciples looking down upon the mass of spectators. Onwards to Town Hall square, with the space in front of the Forum representing the garden of Gethsemane. Jesus reflected on the bench in front of Blackstocks fish and chip shop before Judas’ arrival with his Roman friends.

The trial took place in front of the Town Hall, with Pontius Pilate being played by Cathedral Heritage officer, Nick Fry, a veteran of the mystery plays. With the crowd opting to save Barrabas from crucifixion, Jesus was ordered away by Romans from Roman Tours and led towards his fate outside the Cathedral west door. 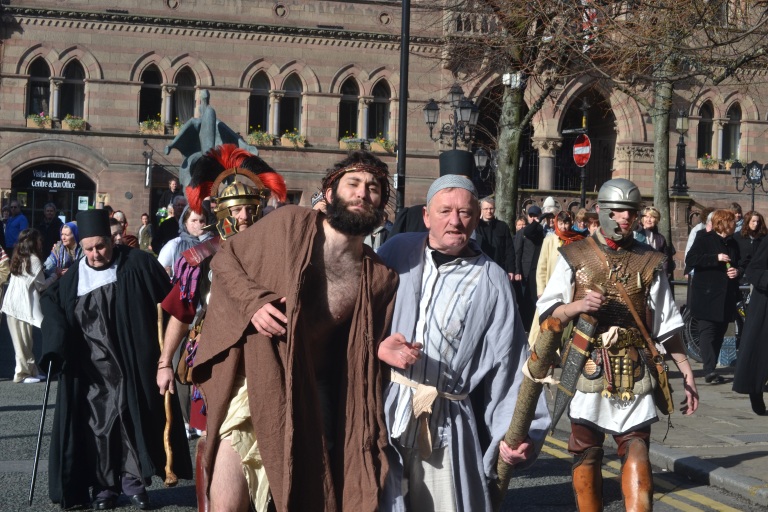 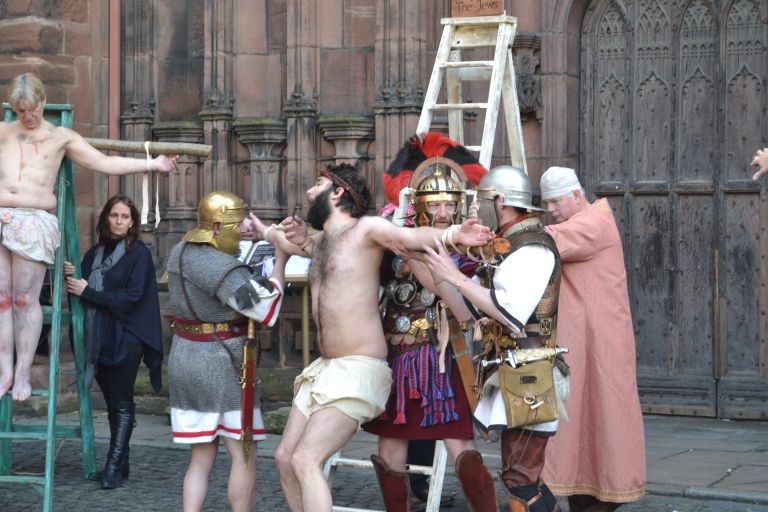 Judiging by the crowds, the very first Passion was a huge success , with Cestrians turning out in large numbers to see the re-enactment of the biblical stories.  With over a thousand people watching and the sunny weather adding to the appeal, Matt Baker said on BBC North west that it had been “incredible” how many people had come out to support the play. Jesus actor Nick Sherratt described the day as “quite emotional.. trying to put yourself into that situation, to think actually “what did Jesus go through” , what were some of the pains , what could he have been thinking?”.

One Reply to “City Passion”