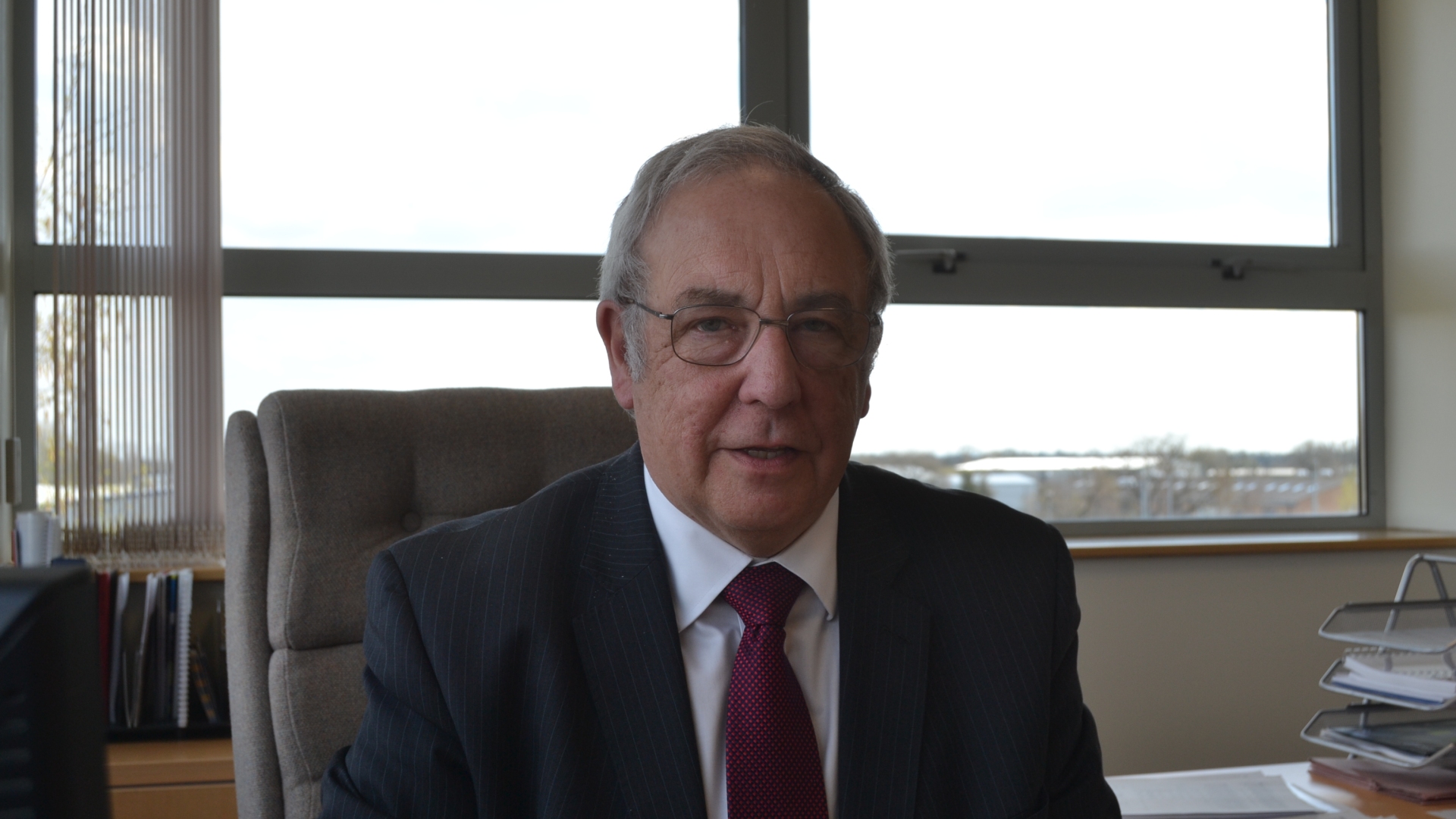 SC visited Police HQ in Winsford for a chat with the current Police and Crime Commissioner John Dwyer. Mr Dwyer is standing for re election on the 5th May alongside Neil Lewis (Lib dem )  alongside David Keane (Labour) and Jonathan Starkey (UKIP) .

The role is about me holding the Chief Constable to account for delivering the police and crime plan which I draw up annually. I say to him “this is what the public of Cheshire want you to do with policing. Here’s the money, go away and deliver it.” I am the conduit for the public need for policing to be fed into the police operations. The public now have a single point of contact which they never had before, should they not be getting the policing service they think they should be getting.

The turnout was less than 14% in Cheshire. Some of that was about wrong time of year, November. The government  gave little publicity to it, lots of people didn’t know about the role. I found during my campaign I was having to explain the role first and then say “by the way I’m a candidate can I have your vote?” It was not a normal election at all. Since then I have worked very hard to ensure that the public know about the role. Whether they vote for me or not is another matter, but at least they know about the role and hopefully will realise its important enough to justify them coming out to vote.

What do you say to people who didn’t vote because they don’t agree with the position ? There is also a lot of critics who say your salary would be better spent on more police

They would say that flippantly. What they don’t realise is that before me coming to post, we were spending £1.3 million to support the police authority. It consisted of 17 members, all of whom were on a salary plus expenses. Now there’s just me doing the work of 17 people. We have saved about half a million which have been invested in policing.

Tell us about your background and your career

I was a 30 year served police officer, retiring here in 2001 as Assistant Chief Constable. I joined the police in 1971, I came here as Assistant Chief in 1994. Long before I got into the job it has always been about change, the wishes of Parliament and so on. Technology has changed , but the basic thing about policing hasn’t changed, and that’s about dealing with people. Its about that public interaction which is ever so important.

Do you plan to close any rural police stations ?

There are no plans to close any police stations anywhere in the county. There are rumours going around, that we’re going to close police stations, we’re not. What we are doing is looking at the estate as a whole and looking at it across the board to see how it fits in with other public authorities. We’re talking to the Fire Service, can we use some of their estate, in a place like Maplas, can we use their office at the side of the fire station as a police community base. Can we do the same thing at Tarporley? Conversations are going on not about closing police stations but doing more.

With Cheshire being a rural area what particular challenges do we face ?

When I came in three and a half years ago, the rural areas felt unloved and uncared for by the police. What I have done is to start focusing the police on rural issues, we had 100 days of activity in the rural areas last November, which was about targeting criminal activity in those communities. We have an awful lot of volunteers helping us. I have set up something called Rural watch, which is encouraging the thousands of people who ride horses in this county to be our eyes and ears and to feed information to the police. There is a number of initiatives going on in the rural communities.

What would be your priority for policing in the next term ?

(John referred me to his manifesto- see http://www.johndwyer.org.uk/manifesto-2016-my-plan-safer-cheshire)

What are your views on Chester’s nightlife economy with particular reference to EMROs (early morning restriction orders)?

Its important that we support the night time economy across the county. The public need some sort of time time activity so I’m not against it at all. What I am against is the abuse of alcohol, that produces violence, sexual assault, anti-social behaviour . As indeed does drug taking. They have an impact on policing because police get sucked into dealing with the repercussions of all those issues. EMROs are fine , as indeed is the late night levy, its a way of recovering the extra money that’s required to police these issues. But they are blunt instruments because they apply to the borough as a whole. If you were to ask Cheshire West and Chester council for a late night levy, they couldn’t just apply it to the city, they’d have to apply it across the borough. A non offending place in Malpas, would end up paying a levy when in fact that wasn’t the area of trouble. We have not developed any of these in the county yet , we are thinking about how it might happen. It seems a bit unfair to tax someone when they’re not the troublemaker.

You spoke about the cost of policing the eviction of the fracking protesters in Upton and argued that IGAS should pay the bill. Is there any update ?

There’s no update. The background is that the police have a duty to support high court bailiffs in supporting a high court eviction notice. We put together a plan which was very complicated, it was a risky operation because of the way the encampment had been set up.The plan went  ahead, the protesters were evicted in accordance with the legal requirement. So within two or three weeks of that happening, IGAS said they weren’t going to develop this. The issue for me is that they would have known about this 3 weeks before so why didn’t they declare that. The protesters would have left peacefully and we would not have had to put into place this complicated police support for the bailiffs and we wouldn’t have wasted £200,000 of public money. It was a waste of money.

Some critics say that the nature of the role amounts to politicising the Police.

Those people that say that haven’t understood what was there before. The Police Authority consisted in the main, of politicians appointed by the local authority. You the public had no say at all in how the authority was appointed. Its fair to say that the election will be run along party lines because elections always are. But I have made sure that politics does not encroach on the job itself. I have ensured that wherever you are in Cheshire, you’re getting a first class police service.

With reference to the fracking, nationally your party does support it ..

Yeah. I’m not against it , or for it. I’m neutral, what I was dead against was the waste of public money. It is about adopting a stance for the whole county of Cheshire, no matter what your politics are, which reflects the need of Cheshire to get the best quality policing it can. …

Why are repeat offending shop lifters allowed to continue stealing from shops despite numerous convictions?

Its not a matter of them being allowed  to steal. What I would say to those shops is, if you’ve had someone enter your premises to steal, then you need to consider banning them from your premises. Thereafter if they enter your premises, they are entering as trespassers and that heightens the crime they’re committing from theft to burgulary. The other thing is that shop owners need to consider crime prevention techniques themselves We know that goods can be easily lifted by people who are that way inclined.  The majority of people are like you and me, honest and law abiding. Thankfully that’s 95% of people or more. Whoever has asked that question has clocked that its the same people committing the crime, that was always the case back when I was a police officer. We do need to take preventative measures as well

That’s interesting because Neil Lewis is a one trick pony in my view. He is a cyber expert, I take my hat off to him. I’m not a cyber expert but what I can say is , in every police and crime plan I have issued, cyber crime has been a focus.  I have done an awful lot in relation to cyber crime. In this county we have developed all sorts of cyber initiatives , which I think Neil Lewis will realise that its not the sudden appearance of him on the scene that’s made us realise theres an issue. We know there is an issue and we are dealing with it.

I have said to Neil Lewis , his own industry ought to look at ways that it might be able to prevent some of this cyber crime occurring in the first place.

Does the fall in the crime rate include cyber crime ?

It doesn’t include cyber fraud crime. It does include some of the other cyber crime which could be paedophile activity and so on. Fraud crime is recorded nationally, centrally in London by Action Fraud. Cyber crime can occur anywhere in the world, the victims can be here in Cheshire, but it can be done from anywhere. They collate it in London and when they get some common threads and they can identify an offender, they will refer it to the police force where that offender lives. 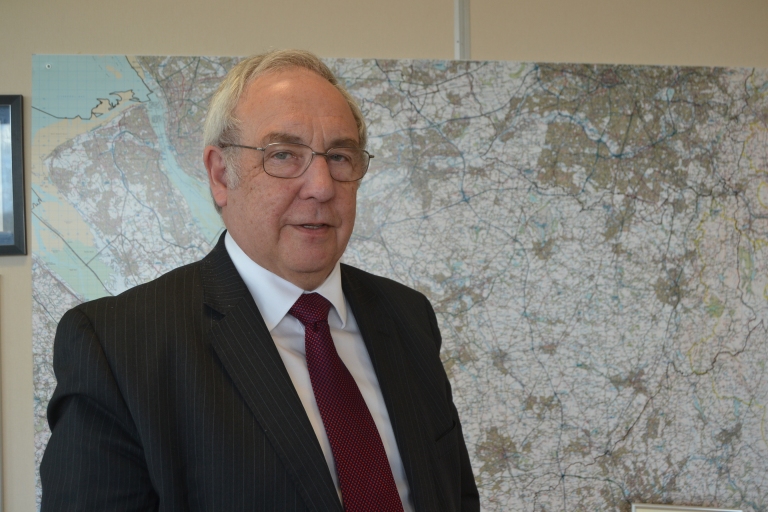 Its more than normal . We are leading the country in relation to that .

Sex offence is up 12.9%. Why do you think that is ? Is it because more crimes are being reported now ?

Its exactly that. The National Audit Office have said that, we have always had the “tip of the iceberg” and now we are getting more of the iceberg exposed. Its not just sex offences,  its about domestic violence, hate crime. Those categories of crime are on the increase and its to do with the fact that the public can see that their complaints and allegations wil be taken seriously, so they’re getting the confidence to come forward and report them.

Do you have a favourite Batman ?

So you don’t wish that you had a Bat signal on the roof then ?

No ! I have no view on that all. No view sorry

What is your view on vigilantes, with reference to Batman, and what about the paedophile hunters ?

we’ve got to be very careful here. I can understand why parents of young children would want to take the law into their own hands. I can understand it, but I don’t condone it. We do need to go through a proper legal process, draw these incidents to the attention of the police and let the professionals deal with it. The trouble with vigilantism is that it can get out of hand. You end up with people being acused of things they’ve not done if you’re not careful. My role as commissioner is to ensure that what people bring to the police is actually dealt with by the police.

People can get in touch with me by twitter , write, telephone, email.

Why should people vote for you ? 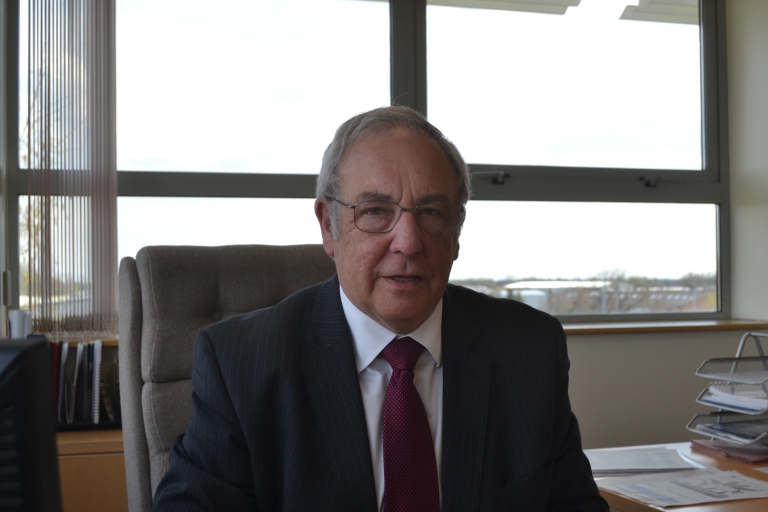 Thanks to @Dwyer4PCC. Next time we will be chatting to the Labour candidate David Keane

One Reply to “A chat with the Police Commissioner”