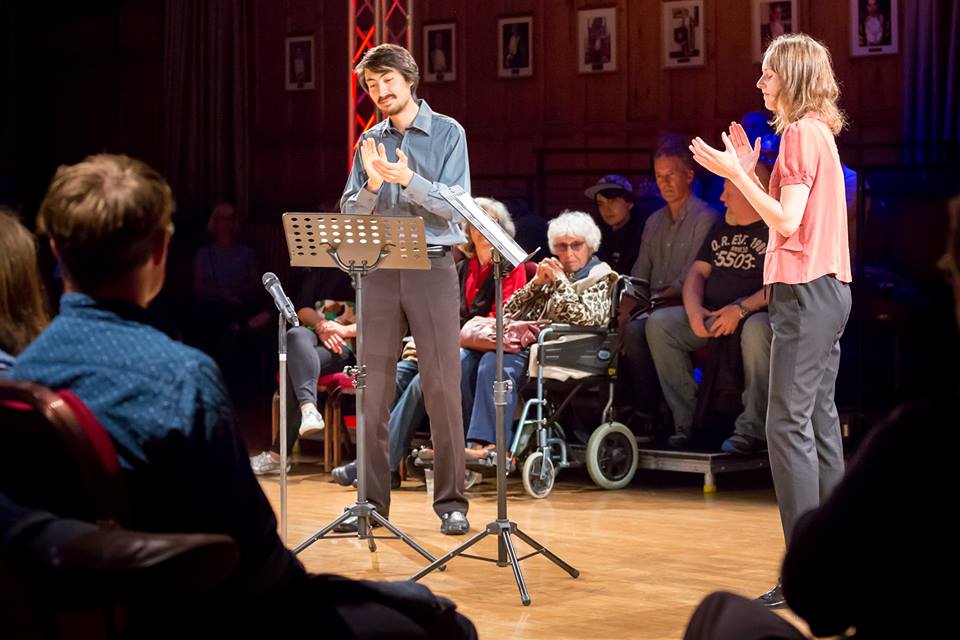 The Town Hall was the venue for an evening of music by the minimalist composer Steve Reich (born 1936)  on Monday night. Not knowing what to expect, this proved to be a thought provoking evening and a further example of the richness of Chester’s culture and the “stuff” that is out there if you can be bothered to look for it. It was in this very room in early 2015 the comedian Justin Moorhouse, during a stand up comedy night, bemoaned the fact that there was “nothing to do” in Chester…

The first musical treat for the audience was the 5 minute long “clapping music”. This consisted solely of 2 perfomers clapping out a melody, and it was initially baffling. As someone who struggles to listen to  watch a whole music video on youtube, the repetitive hand claps were strangely hypnotic. As someone unfamiliar with the minimalist scene, this was a fascinating introduction. It was  just two people clapping, I say just but it looked like it was a physical challenge, and the performers were reading from sheet music.. and it worked, because it was music stripped to its barest essential, the rhythm.

“Violin phase” was the second piece, performed by Sophie Rosa of Ensemble Deva. Here the violinist plays against a recording of a repeating melody. The live performance and the recording are offset , and the violinist joins in with the same melody on a delay. The repetition was again, thought provoking, unsettling and mesmerising. The musical duelling evoked feelings of the flow of time and the prison of memory, as themes faded in and out. It was a beautiful nervous breakdown set to music, and received thunderous applause.

Cello Counterpoint was a contrast, with a strong emotional appeal with the cello conjuring up more varied melodies from the romantic to the sinister to the dramatic. During this performance, I noticed 2 young children, who had probably been dragged along by their parents. One of them returned after the interval.

Estonian composer Arvo Pärt’s  “Fratres for String Quartet” was also quite varied, the opening being flighty, then shifting into an eerie and sombre void. The beat of a drum added to the sense of foreboding in this piece before it suddenly dropped dead, leaving listeners adrift.

The main event Reich’s “WTC 9/11” closed the evening. The string quartet were back, all wearing headphones covering just one ear. 15 minutes long, this is the composers interpretation of the destruction of the world trade centre. Including the voices of witnesses to the attack and of NORAD air traffic controllers, the piece is a dark depiction of a day of horror. The instruments sound like car alarms and sirens as voices cry out phrases like “people jumped from the building” and “it was chaos..it was chaos”.

A culturally enriching evening:  The music festival may not be for everyone, but its another string to Chester’s diverse  bow, illustrating the talent we have in the city, and  well worth trying out in the future if you haven’t already been.

All pics by Mark Carline : https://www.facebook.com/PhotographyByMarkCarline/