On the 100th anniversary of the Battle of the Somme, hundreds of volunteers led by the Royal Exchange Theatre  and partners at Storyhouse (Chester), Bolton Octagon, LeftCoast (Blackpool), and Oldham Coliseum were part of a UK-wide, modern memorial to the lives lost in the battle. Commissioned by 14-18 NOW, the UK’s arts programme for the First World War centenary, the work was conceived and created by Turner Prize-winning artist Jeremy Deller in collaboration with Rufus Norris, Director of the National Theatre.

The specially commissioned event saw around 1500 volunteers dressed in First World War uniform appear unexpectedly in locations across the UK.

Early morning commuters saw the soldier’s eerie and poignant procession moving along Bridge st , Watergate street and then onto the train station.

The participants who walked the streets today were a reminder of the 19,240 men who were killed on 1 July 1916, the first day of the Battle of the Somme.  Each participant represented an individual soldier who was killed that day. The work is partly inspired by tales of sightings during and after the First World War by people who believed they had seen a dead loved one.

The participants wore historically accurate uniforms, representing 15 of the regiments that suffered losses in the first day of the Battle. The soldiers did not speak, but at points throughout the day would sing the song ‘we’re here because we’re here’, which was sung in the trenches during the First World War. They handed out cards to members of the public with the name and regiment of the soldier they represented, and, where known, the age of the soldier when he died on 1 July 1916.

The volunteers were men aged between 16-52, reflecting the men who would have fought in the Somme. They were not trained actors but come from a range of professions, including a sheep farmer, flight attendant, doctor, lawyer, social worker, shop assistant, portrait artist and GCSE student. They came together to rehearse in theatres across the UK over a month-long period in the run-up to the performance.  ‘we’re here because we’re here’ is one of the largest arts participation projects ever staged in the UK, with hundreds of additional volunteers working behind the scenes.

The soldiers paused again outside the back of the Grosvenor centre, surprising many disembarking bus passengers as they stood , seemingly frozen in time.

The happening concluded after midday with the soldiers gathered around the clock, again handing out simple cards of remembrance , with many people visibly moved.

Alex Clifton, Artistic Director, Storyhouse said that he was  ‘ deeply moved ” as he stood in Chester station, ” with Jeremy Deller’s living monument to a dreadful day in our history. A young soldier gave me card with a name: Private William Hamilton, of the 17th Battalion Highland Light Infantry, who died in the battle of the Somme. I’ve been reminded today how blessed we are to live in a period of relative peace and security, and am hugely glad that Storyhouse has collaborated with arts organisations all over the country to bring this work to Chester, the Wirral and Liverpool.

The  Battle of the  Somme will also be commemorated on Saturday July 2nd with a parade by soldiers from  the Mercian Regiment.  Following the parade there will be a service at the War Memorial in the grounds of the cathedral. There will also be a temporary  exhibition at the Cheshire Military museum. 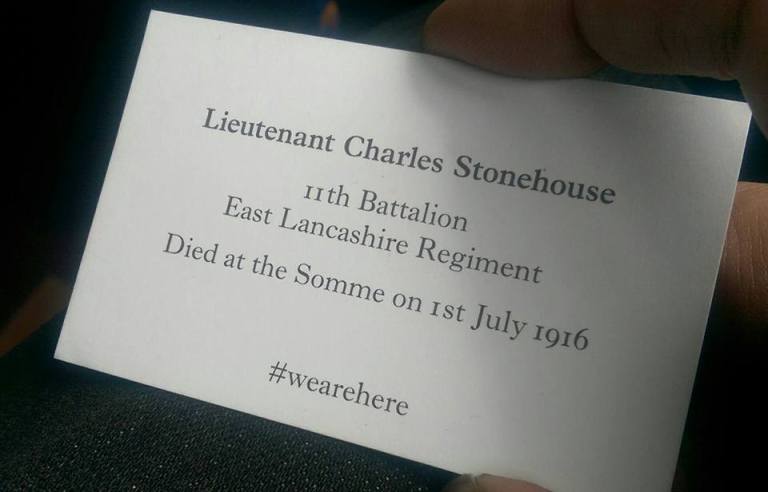