One of the highlights of Chester’s cultural calendar, the Grosvenor Park open air theatre is back, now in its 7th season. Storyhouse artistic director Alex Clifton has assembled a young cast for “As you like it” and we attended on opening weekend. The grey skies didn’t spoil the day , with the unique atmosphere of popping corks , gentle chatter and the well drilled blue-shirted Storyhouse team handing out blankets and seat supports.

The opening scenes play out the family feud with the tyrannical Duke, played by  Ian Harris, who has banished his brother from court. In his suit and tie the Duke has a strong resemblance to former council leader Mike Jones, and this adds an extra level of humour to the play for followers of the Cheshire west political scene. In a nice twist, the same actor plays the dual role of his brother, exiled in the forest of Arden.

The plot soon picks up with a wrestling scene, watched over by the Jones lookalike, and in a modern twist, the cast taking selfies with the wrestlers or filming the action on their mobile devices. We are introduced to the lovers to be , Rosalind and Orlando, and the jester like Touchstone, a master of physical comedy with an ever present puppet on his hand.

As the action moves to the forest , represented by a sculpture of upturned trees, we have the “melancholy traveller” Jacques delivering one of Shakespeares’s most poignant speeches:

“All the world’s a stage   .. and all the men and women merely players”. The speech works on a literal level, as the hero recounts the seven ages of man from birth to “oblivion” but is also a metaphor for the theatre itself, with one man playing “many parts”- the cast of 15 actors are playing multiple parts in all 3 plays of the season.

“Love is merely a madness” says the disguised Rosalind in the second half , and this was the queue for the downpour to begin. The cast didn’t even flinch, and  theatre staff were rushing around handing around umbrellas as the rain fell into my coffee cup. With the addition of some comedy Welsh farmers to complete the love triangle/square as well as a biker vicar, the play rushes towards a well sign posted happy ending. The closing song and dance is sure to leave a smile on your face and some happiness in your heart. 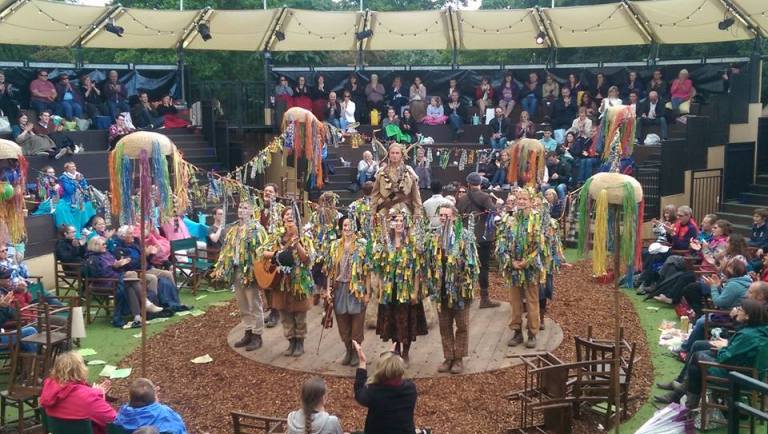 “As you like it” is a welcome antidote to  currently troubled times with many laugh out loud moments. The linking music between the scenes, as last year is excellent and testament to the multi talented cast. Its the best of Chester.