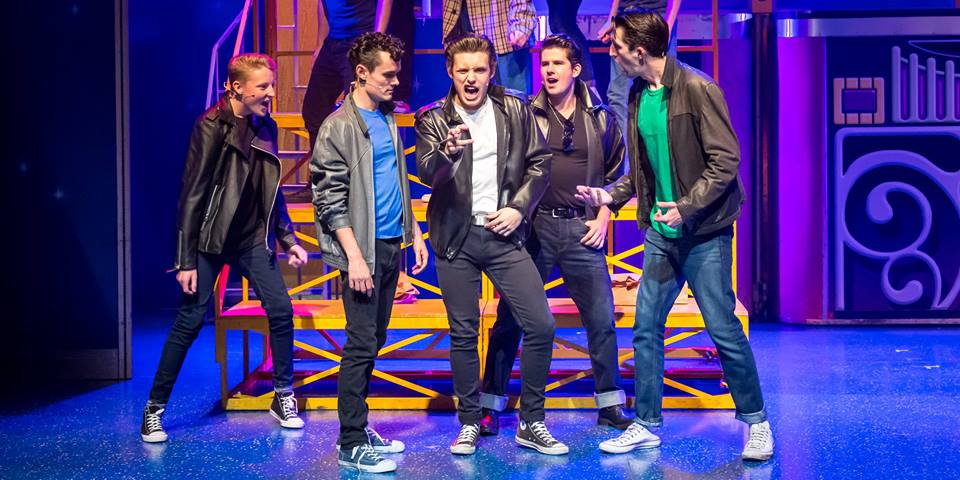 Community theatre group, Tip Top Productions latest show is the much loved musical “Grease”. We went along on opening night to see the sell out show at Theatre Clwyd in Mold, which celebrates its 4oth anniversary this year.  Tell me more (Tell me more)…

Directed by Tip Top’s Steve Davies, the musical takes us back to an idealised 1950s teenage America  of diners, drive through movies and high school dances. Based on the hugely successful 1978 film featuring John Travolta and Olivia Newton John, the Tip Top version, has musical direction by Tim Jones and choreography by Rhian Underwood .

After a minimalist on stage radio sets the scene,  the title song fills the stage with the energetic young cast. The central roles of Danny and Sandy are played by 18-year-old OIiver Hale and 22-year-old Becky Roberts. As a regular Tip Top theatre goer I noticed that several of the  cast had appeared in previous productions with Rob Lyon (Roger) with his familiar American accent and Annie Howarth as Frenchy also standing out. I hadn’t seen Josephine McHugh before, but she commanded the stage in her dark wig as the complex Rizzo. The advantage of this version as compared to the film version is that the cast actually look like the ages they are supposed to be, unlike the movie version. To their credit the cast make the roles their own and I was not thinking of Travolta or Newton John during any of the songs. A basic set evokes the 1950s and includes the familiar raised seating for the cast to shimmy along during “Summer Nights”. With each musical number greeted by rapturous applause it was hard to find fault although  I did find  the comedy aspects of the “mooning ” duet between Lyon and  the excellent Julie Blagrove a tad jarring with the yearning ,bittersweet lyrics. Having said that Grease provides plenty of laughs with the love shy Doody’s interactions with Frenchie a highlight.

Its  always great to see local talent on a bigger stage and I have been assured  that when Storyhouse finally opens , community groups like Tip Top will have the chance to use the new facilities… Look out for a great version of “Those Magic Changes” amidst the more well known hits.

The second half features the High School dance and some acrobatic dance moves are on display , with the scene also showcasing the varied and colourful costumes. Radio DJ Vince Fontaine makes an appearance , getting up up close and personal with one of the cast in a move that would probably lead to a Daily Mail “teenage sex scandal” if it happened today. Times change, but the quality of the songs doesn’t and the continued appeal is illustrated by the number of young people in the audience. “Beauty School Drop Out” is particularly well staged with its dream like interpretation a contrast to the rest of the musical.

The familiar source material flows smoothly to the climax and your foot will be tapping along once more . With the source material as well known as it is, it would be hard to mess this up, but Tip Top’s amateur young cast deliver a professional finish to a wonderful evening. Packed with nostalgia, fun and great songs, “Grease” is the word and another hot for Tip Top. Credit to the cast who make it all look so easy. I’m sure its not !

Tickets for Grease are completely sold out .

Thanks to Steve Davies and Mark Carline

One Reply to “Grease review”