Children in 3 schools in the city were treated to a viewing of a Lego model of Brook street yesterday. The schools had previously been involved in a project celebrating the history and heritage of the street organised by CDEC , a leading provider of education services across the borough. Construction of the model, which features many well known shops and landmarks, began in June with parts previously on display in the charity Lego display in the market.

Heather Swainston of CDEC which was set up in 1997, with the aim of bringing a global dimension to the curriculum said that “We’ve done lots of different projects but the Brook street project is an idea we have had for years and finally got some funding to do it. We wanted to try and map with pictures and stories the different cultures represented in Brook Street ” CDEC obtained funds from the Promoting quality and diversity fund from CWAC , and some local councillors. “Its taken a while to do, we’ve had to build relationships and we have gone down the street an awful lot. We found that there are 26 different cultures and countries represented. We worked with 3 schools, Oldfield, Hoole and Chester Bluecoat, it was something that the heads of those schools had been really interested in. They wanted their children to realise the diversity locally and to be inspired by it, rather than threatened. The children spent time on the street and have been really inspired . ”

Alan Brown, Head of Oldfield Primary school , the first school to be visited , confessed to being a huge Lego fan himself and said that the pupils “engaged with it because they’re familiar with it and they’re able to respond to the model and they know where it is. My son has lots of Lego and we play with it together, he’s 12 but I’m a bit older!” He hoped that the children would be inspired in their future Lego building .

Nearly 200 pupils across 3 schools saw the model with many recognising buildings they had visited including the Chester Tandoori and the comic shop. Pupils also spoke to the artist behind the model who said that the entire display had taken 4-5 months to create and included custom painted signage on the bricks. The famous mural on the side of the comic shop was created by sticking a postcard to the bricks. 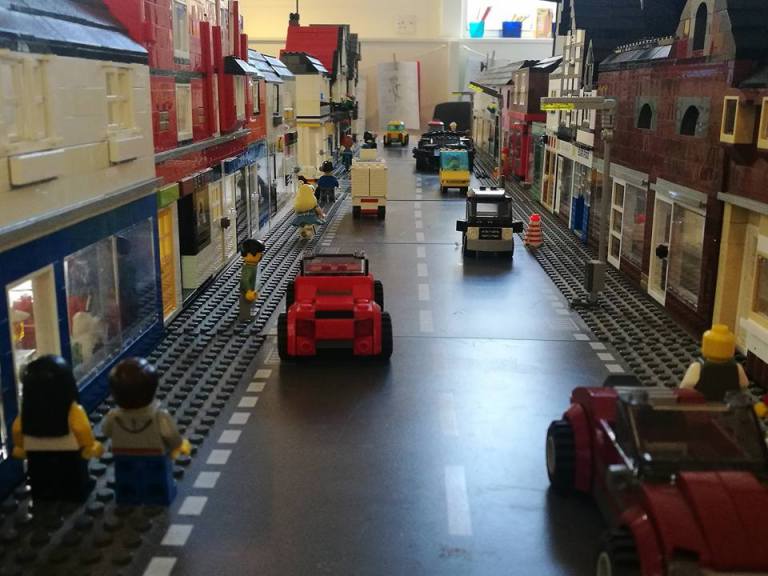 Mr Bengree , teacher at Chester Blue coat school in the garden quarter praised the mode saying that “nowhere else in the world would this happen! We need a traffic warden to give Batman a parking ticket for the batmobile!” He said that lots of work had been done on the Brook street project last year with several visits to the street. The pupils had enjoyed a curry in the Chester Tandoori and also made their own models of buildings they had seen.

“In this school we have 23 different languages spoken .. we were talking about the diversity of the street and celebrating that. We have quite a few Polish children in this school so they were telling us all about the foods in the Polish shop”.

“You could build the bus station when it’s done!” remarked  one Blue coat pupil.

Parts of the Brook street model will be displayed in Becnicks on Brook street from next week. CDEC will be producing a Brook street teachers pack for other schools to use and the project will also feature on their website.