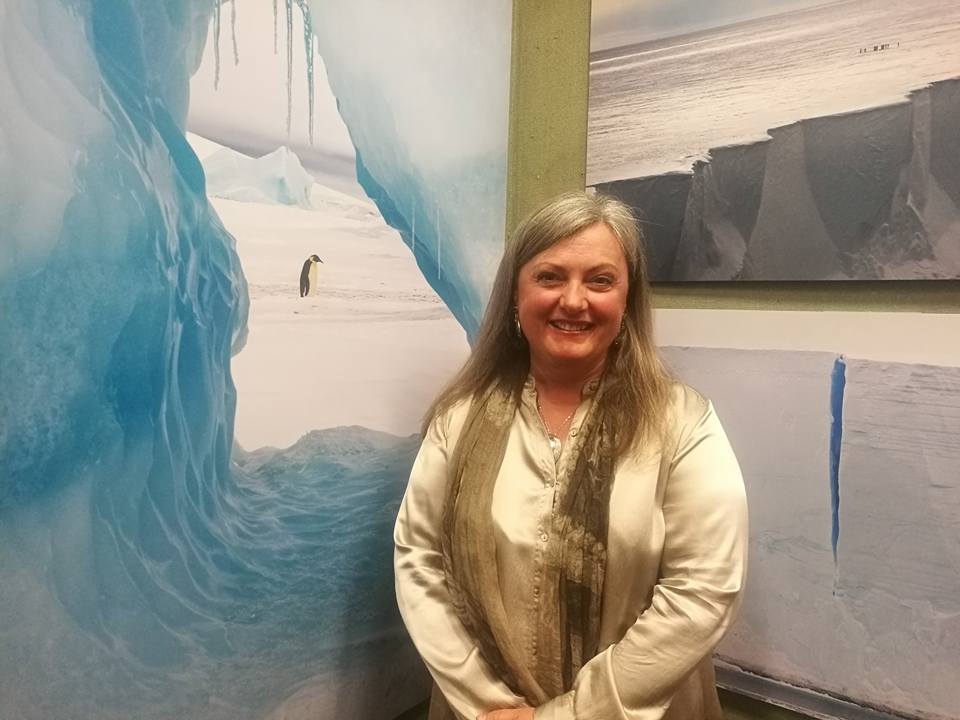 Cold Places is the new exhibition at the Grosvenor Museum by photographer Sue Flood. Sue, from St Asaph was a pupil at the Queens School who went on to spend 15 years as a wildlife photographer.

‘Cold Places: Pictures from the Poles by Sue Flood’ showcases work by the international award-winning photographer and features images captured during more than a dozen visits to the Arctic and Antarctic, including shots of polar bears, penguins, whales, seals, seabirds, Arctic people, glaciers and snowscapes.

The exhibition was officially opened by Jonathan  Shackelton , cousin of the famed Arctic explorer Sir Ernest Shackelton. He described Sue as the “worlds best polar photographer” and gave an insight into the “limitless solitude” of he polar regions. Sue, who was much in demand on the night was kind enough to say a few words into our Dictaphone.

“The exhibition is all about my polar photography which I’ve been doing for the last 20 years.  I have been doing it for a long time. I joined the BBC Natural History unit in 1993 and I spent 11 years there, I’ve been freelance since 2005. 20 years so its a bit scary!

“I like to tell stories about the people and places and wildlife of places I’m visiting. Of course a lot of these places are under threat from changing climate so its also to get people interested in the natural world by showing them how fantastic these wilderness areas are.

“Coping with the cold  varies according to what your living conditions are. Earlier in the year I did a trip with a private client where she chartered a luxury icebreaker for herself and 8 friends. That was extremely comfortable. I’ve just spent 6 weeks living in a tent with no loo, no shower and a lot more basic conditions, but its absolutely fantastic.  When you start getting to the polar regions it becomes addictive!  People don’t really get it until they go, but its an expensive habit!

“I take photographs a lot of the time. You’re taking photographs, you’re looking after the guests. One night.. well I say night but of course there is 24 hour daylight at this time of year, it really interferes with your sleep pattern! You wake up at 3 in the morning and its bright sunshine . I was working the night hours, it was -25 and I was working the night shift. In a months time I am going back to the Antarctic  and the Falklands and South Georgia. ”

In Cold Places features a small lego diorama of an icy landscape which features one of Lego’s popular collectible minifures “the wildlife photographer”. According to Sue when she heard that Lego had released this figure many people have suggested Sue was the inspiration behind it. The official Lego description states that :

“She and her camera have been to every continent on the globe in her quest for photos, documenting the fascinating behaviour that she sees so that everyone back home can see it, too.

Her photos have been featured on magazine covers and in museum galleries, but the real reward comes when she lines up her shot and waits…and waits…and waits…until just the right moment to press the shutter button and capture a bear grabbing a salmon in mid-leap or a penguin diving in front of an Antarctic rainbow. You’ve got to be patient when you’re a Wildlife Photographer, but that one perfect shot is totally worth it!”

“I have just taken a lego figure to the south pole with me ! ” said Sue.

Sue is giving a programme of three talks on January 10, 12 and 13, from 1.30-2.30pm each day, on the trials and tribulations of being a wildlife photographer, as well as a digital photography masterclass suitable for everyone whether they use a smartphone or a camera. Tickets are £7 for a single talk or £15 for all three talks. They can be booked through the West Cheshire Museums website http://www.westcheshiremuseums.co.uk

One Reply to “Cold Places with Sue Flood”