Covino is the new independent wine shop and bar which opened in December on Rufus Court. As well as wine, a selection of spirits, beer and cheese, bread and charcuterie is also available.  Owner Chris Laidler, Chester born and bred moved back home from London to open the intimate new business.

“I was a wine importer and distributor. I worked for a company called Knotted Vine importing really small batch wines from family owned producers into the country. I distributed to restaurants over London, but over time on trips home to see friends and family I built up relationships with Chester’s restaurants as well, Sticky Walnut, Joseph Benjamin, the Chefs table…”

On his move back to Chester from that London, Chris says “its a culture shock in the best possible way. Having a five minute commute to work in my own space is something I can definitely get used to ! I can appreciate London for what it taught me, I learnt a heck of a lot and met some brilliant people but I fell out of love with it because I had to live and breathe in it”

Of Rufus Court, Chris says that ” We are a little like the wines, not as well known. I thought Rufus Court was in keeping with the wines we’d like to be selling. Lesser known wines in a lesser known location, something you’ve really got to search for. Also the rent is cheap ! The rent is approachable, but the proximity to busier parts of town is good. We have the theatre opening in May which is just a stone’s throw away.”

Rufus Court, established in 1991 by the Cox Thompson partnership has seen a high turnover of businesses in recent years. Speaking to the blog in 2015, business owner Graham Tuner of Triactive also took issue with the attitude of the BID who excluded Rufus Court from all of their maps.   Chris agrees that there is room for improvement :

“I’d get a better website, and use social media more. The website is very dated. I would improve the signage on the city walls.. better signposting for the businesses. I would spend a bit of money on the entrance from Northgate street, I think there’s a lot that can be done there. 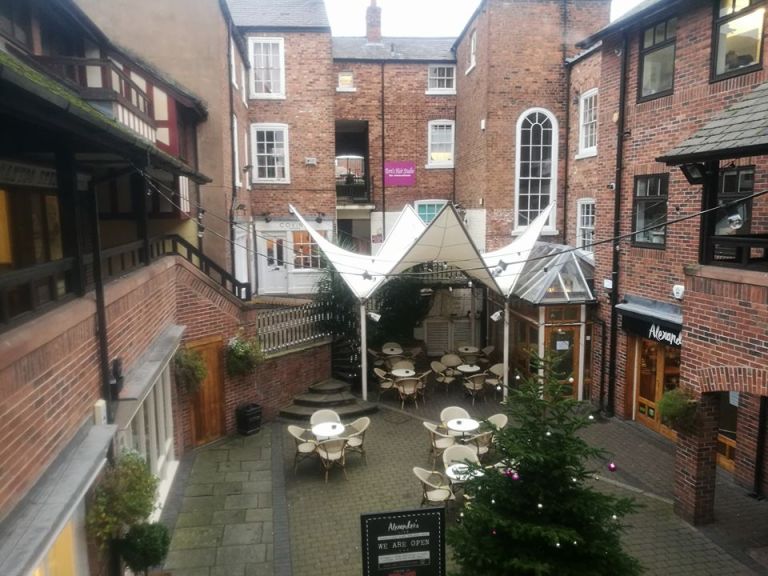 “To get the footfall in is difficult, improving that will improve the business for tenants and the quality for tenants.  Its other things like plants… the hanging basket won’t be missed. they need to be replaced with something that’s alive and actually looks good. It needs bringing into the 20th century …

“The theatre will be a big boom for Northgate street. The footfall will cement the independent businesses of the area”

Of potential rivalry with places like Ginger and also the new Veeno wine bar Chris says “I don’t know Veeno but I think this will be their 10th location so they obviously know how to run a business and how to choose the right location. Its not a cheap unit so they must think that there’s a market there.

“Everyone has been so supportive. People you would consider as your competitors its taken any element of competition out of it and they all complement each other. I know people won’t spend all evening in here, if I can be included on their choice of visits that would be an honour”

Covino have not been open a month yet but Chris says that the baptism of fire has helped him to hone his service and respond to customer needs and feedback.  January has been as quiet as expected but “having said that I’ve spoken to the Chef’s Table  and Joseph Benjamin and they all said that what we’re doing is fine. We are doing better than I thought! We’re still not that very well known, 400 0r so Twitter followers. But I’m happy!”

One Reply to “Covino”