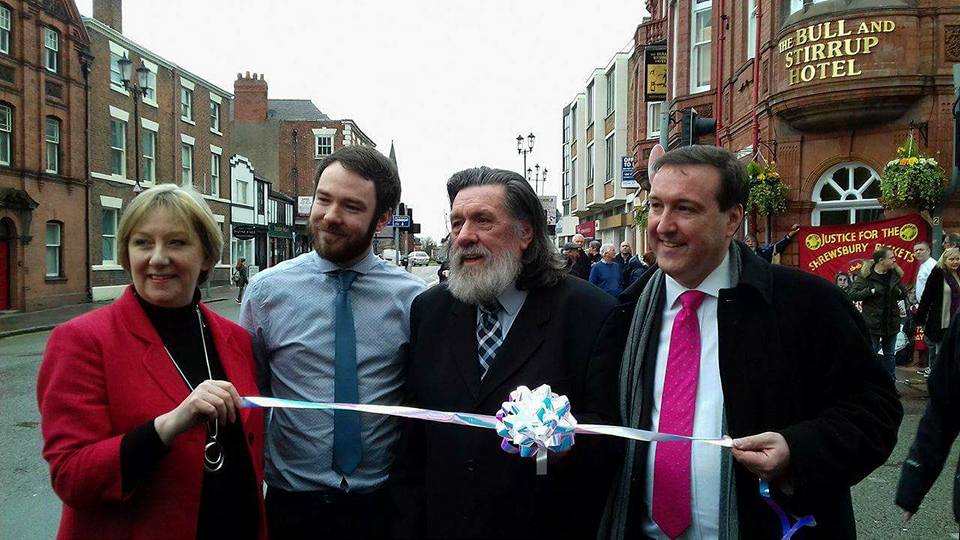 Ex Brookside and Royle Family star Ricky Tomlinson was on Northgate street opening the new look Bull and Stirrup pub today. Wetherspoons, who acquired the pub in 2014 have spent over £2 million on the refurbishment which includes 11 ensuite bedrooms and a new beer garden.  In the 1970s Ricky worked as a plasterer and was heavily involved in the trade union movement. He held meetings in a room upstairs in the pub and was later jailed for 16 months alongside several other picketers for conspiracy. Ricky, who received a fantastic welcome from the public spoke eloquently about his memories of the time and his fight to clear his name…

Council leader Sam Dixon and MP Chris Matheson also attended the launch with Cllr Dixon commenting that : “It’s fantastic to see the Bull and Stirrup coming back into life. It was first built in 1889, but you’re probably not aware that its been Grade II listed since 1997 . It was named after the livestock market which was at the end of the road, which is no more, but its great to see this pub back in action. With all the regeneration that’s going on in the city with the bus station and the new cultural centre.” She praised Wetherspoons for its careful restoration and the unique carpet.

MP Chris was also full of praise, highlighting the 70 jobs created by the pub chain.

“You know what you get with Wetherspoons…To Tim Martin and all his people, thank you for the massive investment. ” The MP said that he had been involved in Ricky’s campaign for some time and highlighted the plight of construction workers over the years. He said that the convictions were a “stain against this country…we will not stop until we get the conviction overturned…”

Ricky, standing on a chair, joked that it was the “smallest stage” he had been on..

Ricky “I’ve had a wonderful career and made a few quid, but some of our lads have passed on . All we want is justice before we all pack in… There are people here who are a different political persuasion to me but I say welcome this morning and thanks for coming. There are people here who have travelled from London who have been campaigning for 45 years… Dessie Warren was a Chester lad, he died from the drugs he was given in jail. He sued the government and was give a few thousand pounds but he had to sign a gagging clause. I haven’t signed a clause so everywhere I go I say: the state killed Dessie Warren. It came out in the trial that our telephones were tapped .The fight will go on . I am thrilled with the turnout from the trade union movement and from Chester..
God Bless you, but the fight goes on! ”

Later speaking to the press , Ricky who was born in 1939 near Blackpool but described himself as a “Scouser born and bred” said that he had connections to the area with his Welsh children and grandchildren. He recalled the weekly meetings held in the pub and his 40 year fight for justice.  He claimed that the documentary film “The Red under the bed”  was funded and produced by the security services and was part of the conspiracy against him, with the actor believing it influenced the jury.

Critical of new trade union legislation which he said was “ludicrous” he said that  “things are going backwards instead of forwards.” He also said that he was a huge fan of Jeremy Corbyn (unlike our MP who called on him to resign in 2016):  “I love Corbyn. What he stands for is tremendous. He is not asking for anything that isn’t reasonable. What the Labour party needs to do is get behind the man”.

Away from politics Ricky expressed a fondness for Chester .”I have always thought of Chester as a medieval town which is beautiful with its Tudor buildings. And its still like that. I am quite delighted and honoured to be here, the way they’ve done it up is amazing. We used to go upstairs and have a little room (which is now a toilet). I might come here and put a little Cabaret show on here because that’s what I do ! ” When asked if his TV alter ego Jim Royle would drink in the new pub he replied:

“No! He’d have a right name for the people that drink here! He’d call them all shirkers whi had never done a day’s work in their life. We never found out if Jim ever worked did we? The last job he was supposed to have was the school milk monitor!.”

The Bull & Stirrup  is  open from 7am until midnight Sunday to Thursday and 7am until 1am on Friday and Saturday. Food served  from 7am-11pm every day

With thanks to The Bull and Stirrup, Cllr Richard Beacham, Rachel O Kelly and Robert Whiteside.

2 Replies to “Ricky Tomlinson opens The Bull and Stirrup”