Crowds filled the city streets today to witness the second annual Chester City Passion, a recreation of Jesus’ last days which attracted over 3000 spectators in 2016.  A collaborative effort between Theatre in the Quarter, Chester Mystery Plays, Churches Together and Link Up, the Passion was directed by Matt Baker, the music director and Mystery Plays composer since 2003. Performed on the streets by a community cast of over 100 people the performance made great use of the city’s architecture and unique features with the action moving from the Eastgate clock to the Cathedral, via the rows and Town Hall square.

Introduced by the Town Crier as last year, the bell ringer told the crowds that “with musicians, drummers, Romans and a donkey, our fair city of Chester will be transformed into the city of Jerusalem 2000 years ago. Jerusalem the holy city, the final destination of Jesus Christ’s journey on Earth as a man. Let our beautiful and historic streets be the setting of Christ’s last days in this world” 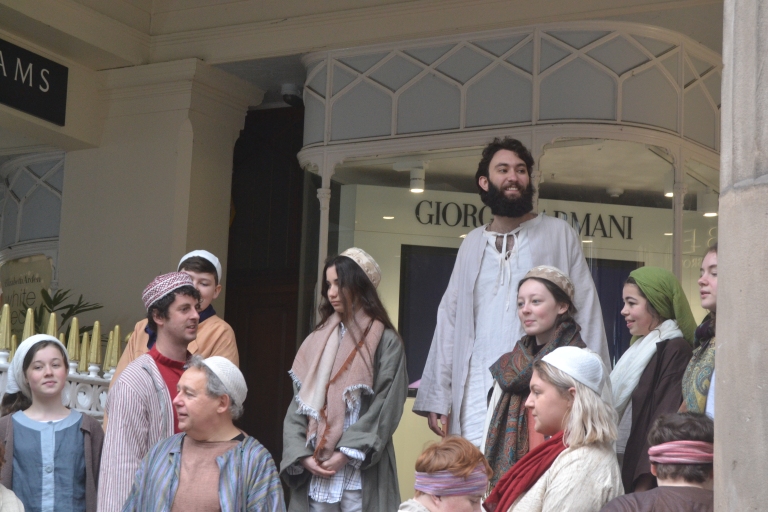 A moving crucifixion scene in front of the Cathedral brought the Passion to a close as the rain gently fell and the crowds applauded.  Lasting an hour, the Passion was yet another example of the large scale street events and parades that the city’s cultural groups have excelled at in recent years.

After the event, Matt Baker of Theatre in the Quarter said that the event had gone “really well,  the rain held off. I’m not sure but it looked busier than last year and I’ve never seen so many people in Chester!

“The rehearsals are the shortest part, its the development and the logistics which take a lot longer. We have had rehearsals for the last month and it all has to come together on the streets at the last moments in amongst the bin lorries and the traders. I’m really pleased. We are doing the Chester Mystery Plays next year (June/July 2018)  and that will take precedence. In the mean time we will be getting ourselves ready for our Lost Boy Production next week!”  http://www.theatreinthequarter.co.uk/