Husband and wife team Katarzyna and Voytek Pachucy opened Pierogi on Brook street 5 weeks ago. Very popular in Eastern Europe, Pierogi are dumplings filled with a variety of flavours, and the new store joins the existing multi cultural food offering on Brook street. We tried out some dumplings over a chat with Voytek: 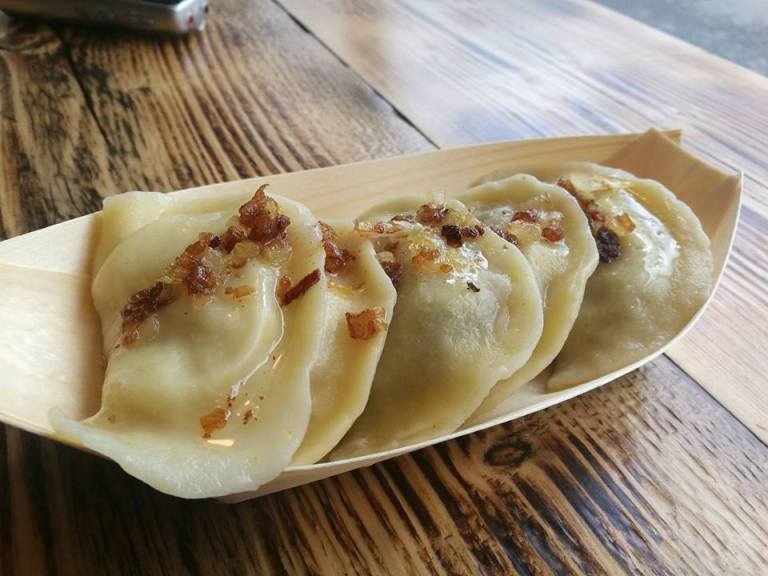 “I worked in hospitality all around the world. I worked in Poland as a waiter. One day I decided to do something else so I worked for Caribbean Cruises , travelling from New York , Bermuda to the Caribbean and the Panama canal. ”

After years of travel he moved to the UK for a better life and financial opportunities around 12 years ago.  First moving to Scotland , he had a hard time adjusting to the harsh winter weather, he then lived in Jersey for 5 years, working in a range of hospitality roles. He met Katarzyna whilst on holiday back to Poland. Settling back home he longed to return to the UK, with his sister living in Ellesmere port.  After a period working for a national chain , he became disillusioned with his job, and experiencing mental health problems Voytek and his wife decided to make a new start.

Originally the couple worked on building a new brand, which is yet to be revealed. “I am not going to tell you what it is, there is nothing like it in Chester!” Visiting Brook street, they were impressed by the vibe of the street and decided upon Pierogi, which they describe as “Polish comfort food, something between Chinese dumplings and Italian ravioli. Its nothing to do with English dumplings. Pierogi are smooth, light and melt in the mouth, very healthy with no preservatives”

“Many people who have never tried them are now coming in twice, three times a week.” says Voytek.  The dumplings are available in 3 flavours including a vegetarian and vegan option. Specials are sometime available, including black pudding, or sweet vanilla cheese. More flavours may be tried in the future. “We have tried with garlic spinach as well, we are going to put everything in, whatever you like!”

Voytek says the customer base has been diverse. As a Polish person living in the UK he says Brexit hasn’t changed his outlook at all. “We don’t really watch TV! We watch cartoons and food programmes! I don’t know what’s going on I don’t really care!” However he does stress the role of immigrants in the UK since 1945, from all over the world. “We don’t believe what they say on TV, making people scared.. I know how to make a nice Pierogi and that’s it!”

Pierogi are open from 10-7 Monday to Saturday!
@pierogichester