Comic legend Steve Coogan, best known for his iconic Alan Partridge character was in Chester today, in support of Labour candidate Chris Matheson.  Coogan who also visited Wrexham on the campaign trail, befriended Matheson when he sat on the House of Commons’ Culture Media and Sport Committee. A victim of phone hacking himself,  Steve stated that Chris has been a “great supporter of the victims of press abuse” and a “fantastic constituency MP”. Today’s visit added some interest  to what so far has been a largely drab election campaign:

Prior to addressing a packed Labour rally, Steve was treated to a tour of the recently opened Storyhouse by artistic director Alex Clifton. The venue was a hub of activity, with events in full flow for Alice’s Half Time wonderland.  Touring the library space and also poking his head into the cinema, with a film in progress, Coogan remarked that Storyhouse was a “really exciting space” and at the end of the tour compared Alex Clifton to a “benevolent all powerful Bond villain.”  Later he commented that he wanted to “live there” saying it was “heart rending to see it being used by so many people a few weeks after opening, children, the young and the old.”

In a video for the Labour party Coogan remarked that  “We need all the good people we can in Parliament…Chris has been a vociferous supporter of some of the reforms to the press that people like myself have been campaigning for . Leveson has been an uphill battle, the Conservatives don’t want anything to do with Leveson because of course they’re supported by the largely right wing press”. 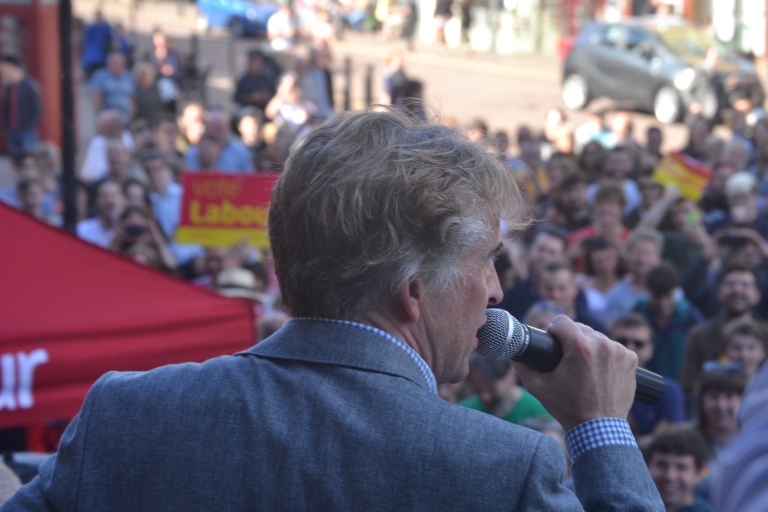 Taking to the town hall steps to address a large crowd of Labour activists and members of the public he said that it was “important that everyone gets out and votes, especially as we’ve seen in the last few weeks, the polls have been closing ..despite the attempts by the right wing media to try and demonise Jeremy Corbyn.” Critical of Theresa May who was labelled “forgettable”, he was dismissive of the city’s Conservative candidate remarking: “This Gallagher fellow who’s been shipped up here from somewhere. He says he’ll move up here when he get’s elected, I’ll believe that when I see it ! ” The Alan Partridge star singled out Chris Matheson’s role in reopening the long abandoned Castle site (scheduled for July).

Also taking the microphone was Chris Matheson himself . Saying that Steve had fought for justice after his mistreatment by the press and warned that the Conservatives would “get rid of all the advances we made in managing the press under Leveson and giving their bosses in the media carte blanch to go back to what the were doing when they were hacking the phones of people like Steve”.

At the end of the rally, Coogan took the time to meet a large queue of waiting fans, posing for photographs with every single one.  Time constraints meant I was unable to ask him how he felt about the improvements to the Frodsham street public realm. They do say it will help people in wheelchairs…. Many will question how far celebrity endorsement affects voting intentions, but to the many fans who attended, they will just say they had a ruddy good time. 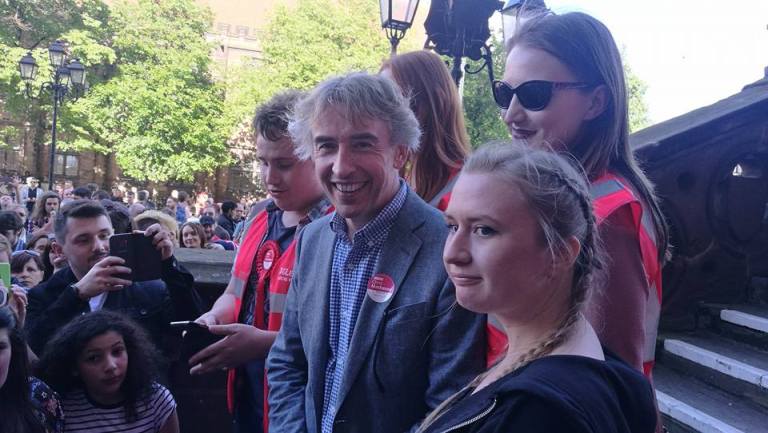