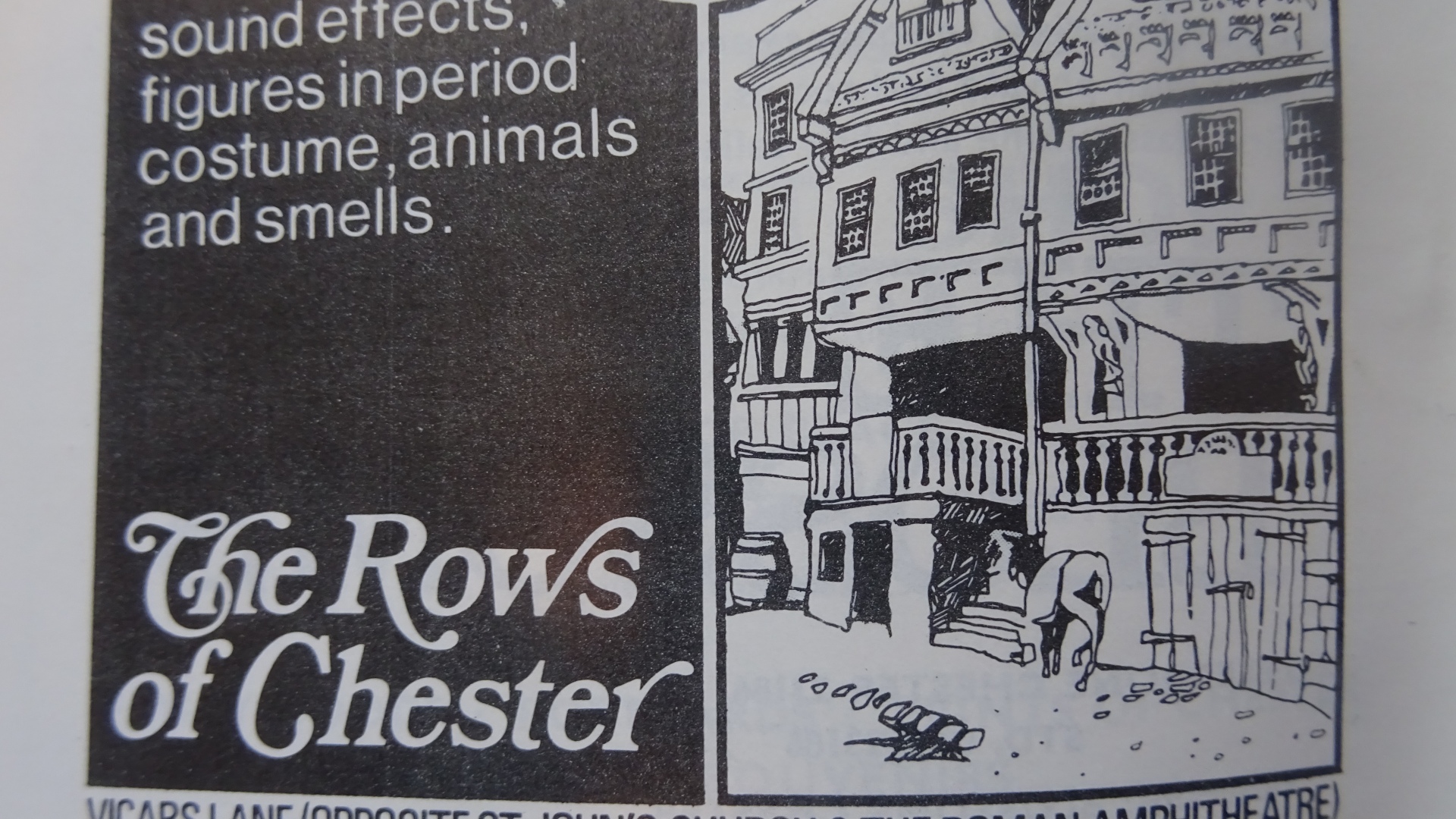 This weeks closure/relocation of HMV from its old home on Foregate street  has sent my mind tumbling back 30 years or more to when the unit housed children’s retail paradise “Toy and Hobby” with its green rubbery floor and large stock of Masters of the Universe figures. Browsing any of the Chester memory sites on social media, the common theme is “everything was better in the past”. Whether that be harkening back to the ancient times of a complete and functioning amphitheatre, pining for “proper shops” like Owen Owen or yearning for the return of the defunct tram system, regardless of what you think of the dreaded “changes” to the city, reading all the posts got me thinking about my own memories and the importance of nostalgia and looking back to simpler times…

The Odeon cinema was a prime hang out in the 1990s. Often accompanied by a pic and mix from the market sweet shop ( still trading in 2018) waiting upstairs in the lobby complete with its sofas and free film magazines offered the perfect escape from troubled teenage years.  In the main screen I enjoyed such classics as Robin Hood Prince of Thieves, and Three Men and a little lady,  as well as the rereleased original  Star Wars Trilogy. One time I was misdirected into the wrong film and ended up enduring the first ten minutes of Edward Scissorhands . I can’t remember what film we had actually paid to see. The Odeon was always an exciting place, with the movie themed shop also adding interest downstairs. Now in the present day its bittersweet to revisit the area after years of dereliction as part of the plush Storyhouse library. I can feel the echoes of years gone by in the sympathetic restoration of the historic building. Its closure was a big blow to the city’s cultural fabric , but we’re lucky the building didn’t get turned into a nightclub as originally planned.  The other cinema of my youth, the Canon (formerly ABC)  closed in 1990 and one vivid memory is watching the awful Masters of the Universe movie there. I can remember Skeletor’s head popping up at the end mid credits , declaring “I’ll be back”- but he never returned. The cinema became Brannigans and then a dreaded chain coffee shop , with the upstairs being taken over by Primark. The Rolling Stones once performed at the ABC, I wasn’t there…unless it was in a previous life.

McDonalds next doors to Toy and Hobby was a semi regular childhood treat, with happy meals part of the fun appeal. The “restaurant” seems light and cheerful in my memories, open and relaxed, contrasting to  the recent claustrophobic refurbishment. Upstairs was the promised land with the children’s carousel seating and the large Ronald McDonald model. This area was often used for birthday parties and I attended a few up there. Mr McDonald has vanished from the company’s advertising  these days along with the other popular characters of the time, such as Hamburgler and the big purple blob character.

In the 80s and 90s  the market was still a bustling place a contrast to the often sad feel of the building these days. The Pet shop is my main memory, having purchased a few hamsters from here and carrying them home on the bus in a small cardboard box. We would often walk by and look at the fish or other small animals in the window. The Pet shop moved elsewhere in the market  and finally closed down a couple of years ago. Also of note was the popular homeware shop where we would buy toilet rolls and toothpaste and the like, another store which was killed off by changing shopping habits, and the rise of the supermarkets and discount retailers.

The adjacent Forum was also a lot busier, boasting a wool shop and a Somerfield, convenient for missed shopping items before the bus home. Of course Somerfield ceased trading years ago and the unit is now a pound shop. Of note was the model shop towards the rear of the centre, which had mode trains in the window, as well as a branch of Weigh and Save- another victim of the changed high street. The back of the Forum now has no shops in it and is largely desolate, awaiting its eventual demolition as part of the Northgate development.   However the back exit leads to the old Gateway Theatre, of which the basement now houses the excellent Forum Studio Theatre.  The annual panto was a highlight here, with the buzz and expectation of the small foyer instilling a love of the theatrical world. A memorable version of Macbeth (1996) which featured Sarah Alexander- who went on to big success in Coupling and Jonathan Creek, as Lady Macbeth stands out in my mind.  Thanks to Storyhouse a new generation can enjoy the ambiance of a night out at a large theatre once again. 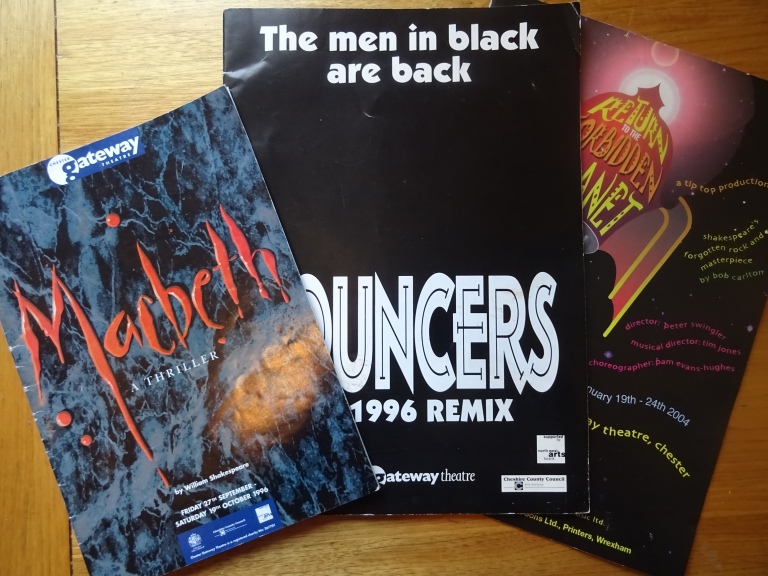 Elsewhere in the borough, even the short trip to a pre Cheshire Oaks Ellesmere Port had a foreign glamour to a youngster, mainly because it had a Woolworths and Chester didn’t. Again the promise of Pic and Mix from there or the adjacent Littlewoods ( long gone) was a big lure. . On one rainy and muddy day during the construction of the Port Arcades my dad took me shopping there and bought me a prized He man figure.

Chester Zoo was a frequent childhood haunt. One particular memory is the walk down to the Noah statue, at the centre of a pond- I would daydream that the statue would come to horrible life like something out of a Ray Harryhausen film.  Another bleak memory is the polar bear which I can recall seeing pacing its cell like enclosure, the animal now long gone and the zoo riding high in the UK tourism charts.  I attended the zoo when Princess Diana opened the new monkey house in 1989. It rained and we were all encouraged to wave our flags at the passing royal vehicle, meaning with outstretched arms we all missed a glimpse of the Queen of Hearts. The monkey house remains, but many other parts of the zoo have changed significantly. The petting zoo has gone, no doubt for health and safety reasons and my favourite, the tropical house has been altered with the dark walk through passage lost, as animals have been divided into different geographical enclosures.  Just across the road from the zoo the annual Lions Club fireworks display took place in fields. Now moved to the racecourse with its future in threat, for a child this event was the sign that Christmas was on its way, with tents offering toys, gifts and toffee apples- the ultimate family night out.

Visits to the Millets Cafe on Northgate street are treasured memories. Before the arrival of the Costa empire, the lavish cafe offered chewy chocolate flapjacks which have never been equalled after years of searching. Upstairs in the unit which is now Zara, the cafe was entered via the vast hall of tents and camping equipment.  After all these years I have scarcely visited the old premises, fearful of that dull pained echo of the past.

The Visitor centre on Vicars lane opposite the amphitheatre is another fantastic teenage memory. Featuring a recreation of the rows with sound effects and smells, the darkened atmospheric 19th century scene was an unappreciated gem, and exactly what modern day Chester needs. The centre closed and now lies empty with the fate of the rows recreation unknown. A sad loss, leaving me to wonder how a larger scale version of this could have been Chester’s Jorvik centre, perhaps an indicator of what might have been housed within Dee House if successive councils hadn’t left the building to rot.

Alongside the aforementioned HMV, where I once spent a summer building up a DVD collection in the early 2000s just so I could buy from a girl I fancied in there, the city had a much wider range of options before the internet came along. Lower down Foregate street was the Virgin Megastore – the single chart section- in the days when you could still buy CD and cassette singles- is now roughly where the soft drink fridges are in poundworld.  Seemingly always busy, upstairs had a large video games section as well as rows and rows of DVDS. Downstairs was a dedicated classical music section.   In later years Music Zone (now Paperchase) was another option, alongside MVC in the Grosvenor centre, as well as Our Price (the city once had 2 branches) – I recall seeing a poster proudly boasting of a DVD offer- 3 for £40.  Such a wide array of audio visual options would be unthinkable in the shrinking modern high street.  Next door to Our Price was Athena– no real modern day equivalent- which sold quirky gifts and had an impressive poster rail to browse.

Also on the retail side, Bookland with its historic crypt is sadly missed. WHSmiths and Waterstones keep the book shop flag flying, but the choice was much wider “in the old days”. Hatchards was another one- on Bridge street row. It always seemed to smell of cheese and onion crisps. Now any book can be obtained cheaply online , like everything else- the high street the victim of the breathless speed of modern life and everyones fondness for big soulless out of town retail “parks”. Theres no need to check the football scores on the TVs in Dixons window anymore- you can check the score on your phone every 2 minutes.

Christine Russell MP once came to my school and gave a talk about her work. I was soon disillusioned when she explained how every time there was a vote, she would wait for the party whips to tell her what way to vote. This disillusion can also set in when we compare the past to the present- most of these places are gone, but for future generations their memories will be of going to see a show at Storyhouse or playing Pokémon on the walls, or sitting on the Frodsham street death benches. The internet has reduced our shopping options but given us the world, literally at our fingertips. In a world where social media has brought us closer together but paradoxically more distant from each other, if theres a heaven, I hope I can have a flapjack in the Millets cafe again.

2 Replies to “My Chester memories”