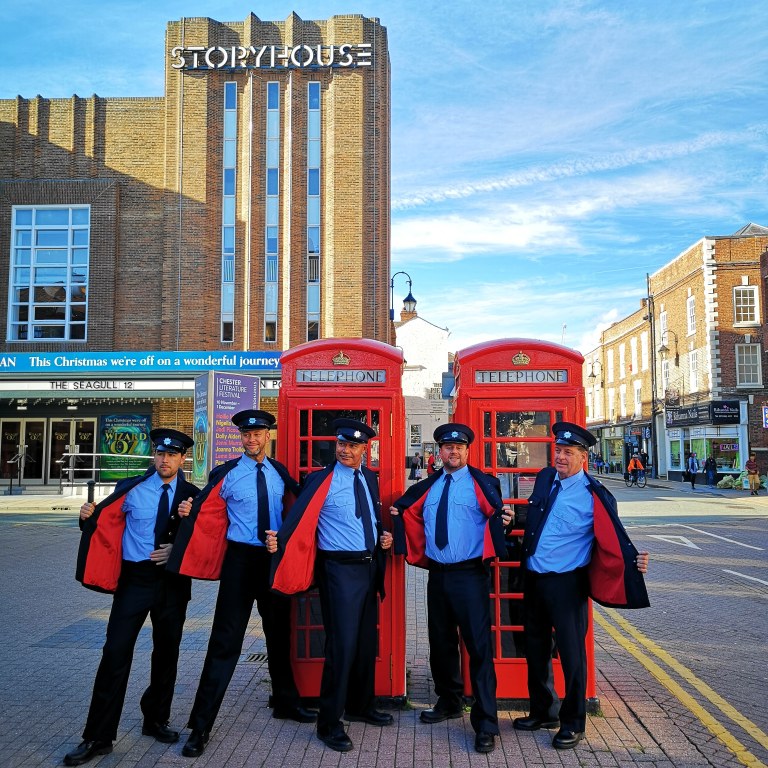 The Full Monty comes to Storyhouse in Chester from Monday 24 September to Saturday 29 September 2018. Based on the acclaimed film,  The Full Monty stage play has become one of the most phenomenal theatrical productions ever – winning the UK Theatre Award for Best Touring Production. The 2018/19 tour is  directed by previous cast member and Coronation Street actor Rupert Hill.

We spoke to Louis Emerick at the press launch.

You’ve been in the show since 2014. How does it feel to be coming to the end of the run?

Its great, its like putting on an old pair of slippers, or an old thong! We have toured all over the country, this time we’re going to some new places, some of the same places and we’re actually going over to southern Ireland. You get to see places that you wouldn’t normally go.

Do you enjoy that as an actor or do you prefer staying in one place?

Its nice to be at home, its tough when you’ve got a young family as I have. If you’ve got to do the job, theres not many better than this. Full houses most times, and its great

What are your memories of Chester ?

I was at the old Gateway theatre and that was back in 86. I came to see another show there called Blues in the Night in 1990.  It was a lovely theatre, Chester people loved the theatre. I could not believe when the old theatre was closed , that Chester was without a theatre for so long. I knew then that people really enjoyed it. You can go to Liverpool, Manchester for our big shows whatever, but some big names used to come to Chester so its nice to see Chester have a theatre of its own!

What are your memories of Brookside ?

Great memories. I went in for one episode and stayed for 12 years!  10 of those years working mostly alongside Mickey Starke who played Sinbad. I last saw him on Loose Women a few weeks ago, myself, Michael, Sue Jenkins who played Jacqui Corkhill and Claire Sweeney who played Lindsay.  It was a nice get together. The nice thing about social media is we’re all chatting to each other even though we don’t see each other as much as we’d like. I’m going back to Corrie ,”unfinished business with Liz” so watch this space!

Do you remember the Killer virus storyline ?

Oh, please don’t! (laughs) Why did you have to bring that up!

“Nobody can come in here, theres a killer virus”

That particular storyline, we all had to wear disguises when we went out because we hated it! There was one shot up a ladder, and you’ve got Mick Sinbad and Jimmy with a few chairs and a plank across “”NOBODY COMES IN, NOBODY COMES OUT” !!  Phil, please don’t write that story, that was the only poor one out of 12 years I’ve gotta say. I do get the cringes, trust you to bring it up!

Could it ever come back ?

I dont think so. You know in the last episode when they had Jimmy saying Brookside “closed”. They should have a new series with new actors saying “open for business”.

Your former brother in law Paul Barber was in the film version, did he give you any tips?

Paul Barber.  He played the same character, Horse in the film. Him and I share a nephew. He’s one of my inspirations. When I got this back in 14 I did ring him up and say “listen our kid I’ve got the part!” and he was made up

What is the message of the Full Monty?

The message is hope with a capital H. In those early/mid 80s with mines, steelworks getting closed down left right and centre. The Sheffield steel factory at its peak employed 10,000 people , generations worked there. For it suddenly to go, people hadn’t retrained for anything, the place was decimated. This is 6 guys, not just the guys, the community, they all came together for one night, forgot their woes and had a ball. They aren’t gym bunnies, they’re any guys out there. Its hope over adversity, and that’s always a great story.

Thanks to Bill Elms and the team at Storyhouse