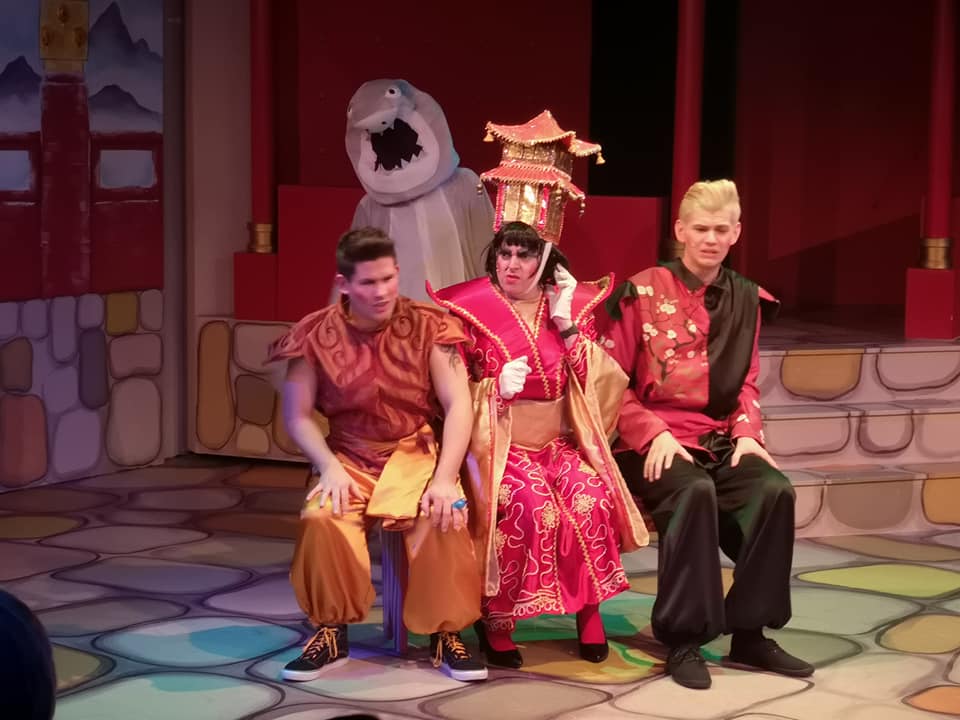 This years festive offering from Tip Top Productions is Aladdin ,written as usual by Peter Swingler MBE.  Looking at the cast list there was initially a sense of deja vu with many of the cast members returning from last years show. However, any sense of panto fatigue was soon swept away by the uplifting music and comic energy of this years production.

Confidently striding onto the stage, with opening number “The One and Only” Cestrian Ashley Sollars was a hit with the audience from the start.  The cast of 6 consists of panto veterans including Jade Pritchard (Jasmine) and Kevin Dewsbury as independent business owner Widow Twankey. Dan Ellis, Wishee Washee, is as sparky as ever, “well THIS YEAR my name is..” he jokes early on, riffing on the comfortable familiarity of proceedings. This years script features the usual mix of modern pop songs and contemporary references including Snapchat, Rosies , gender fluidity and Northern Rail. The joke quality is a definite improvement on last year, with the innuendos maxed all the way to 11. Andrew Rawlinson Heath, with the same Cockney accent as last year, plays  “magical pixie” the slave of the ring, and  takes camp to hilarious new levels, with each dramatic entrance to the stage. Ethan Holmes completes the cast as moustache twirling Abanazar. The famous genie of the Lamp, in another modern twist is a CGI creation shown on a video screen in the intimate surroundings of the Forum studio theatre.

With a finely tuned script, audience participation and songs ranging from Elton John to Jess Glynne and the Proclaimers, Aladdin is amazing fun and displays a group of local actors and production staff at the top of their game. Affordably priced tickets available from