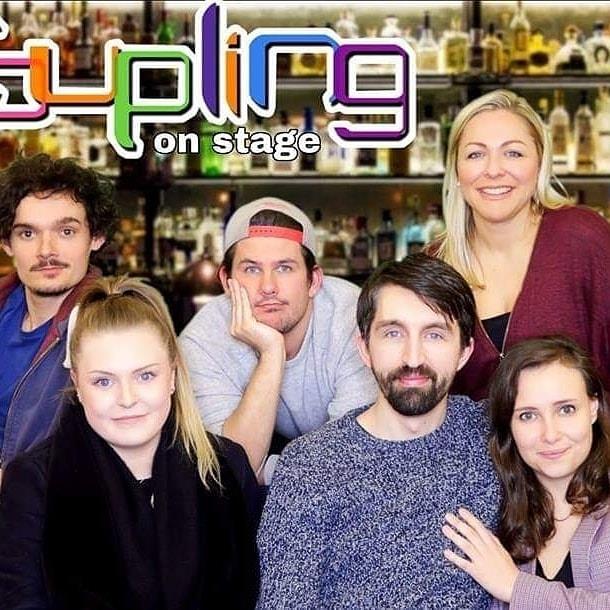 “Coupling” is the world first stage version of Steven Moffat’s BBC sitcom which first aired in 2000. The show centred on the dating, sexual adventures and mishaps of a group of 6 friends in their thirties. Directed by Josephine McHugh, this production offers 3 episodes of the show with 2 intervals in between, in the same fashion as previous Tip Top TV adaptations.

The usual high standard of local acting talent make up the cast, and  part of the fun with Tip Top is noting where you’ve seen particular actors before. A confident Phil Cross stood out in the cast, as well as Hollie Anderton as Susan.  Ashley Sollars also impresses as the quirky Jeff with well timed one liners.  The opening episode introduces the complex web of relationships between the six characters, and it was at times hard to track, who exactly was sleeping with who,  although the sparkling witty dialogue means you can just relax and enjoy the flow.  One cool technique used is flashing between the two groups of friends to show their differing perspectives of the same situation.  Tip Top regular Rob Lyons does well as the everyman figure Steve, who exceeds at digging himself deeper and deeper into embarrassing situations. The section where he mistakes  Janes’s (Brogan Craine)  therapist for her lover was comedy gold.

Contemporary references to Game of Thrones, Daniel Craig and Inception seemed jarring with the original 2000s setting where DVD recorders and answering machines serve as plot points.  Although the themes of the show remain universal some of the sexual elements may sit awkwardly in 2019, particularly one of the characters DVD collection of videos of his romantic conquests.  However these are  minor points and “Coupling” offers  plenty of laughs, and is performed by a cast with great chemistry. It will appeal to fans of the TV show , but if like me you aren’t familiar with the series, it  offers a very funny night out as a stand alone piece.