“Now its raining and that’s your fault…”

I board the bus to Wrexham from Grosvenor Street. The luxury bus fitted with wi-fi, charging points and bi-lingual stop announcements pleases me initially. However as romantic images of “crossing the border”, slipping into East Berlin on an undercover mission etc, fill my head, as per usual reality cuts through. The ride is so bumpy that the phone charging cable struggles to stay in and attempting to write leaves my handwriting looking like Guy Fawkes’ post torture confession. Still, past scenic Pulford I ride, and Rossett, as migraine blurs my vision.

Upon arrival at the bus station I visit King Street Coffee. The independent cafe has been a feature at the bus station since 2016 and I settle down with a copy of the Wrexham leader, still in print despite the recent closure of the town centre office. When the Chester one was still around, people used to regularly complain about it featuring news from Wrexham, and, vice versa, theres a page of photos from the Chester race for life, which may or may not interest locals. Opposite that a feature about a Mouse festival at St Giles’ Church grabs my interest. Meanwhile on the letters page, above a column by Hannah Blythyn, Assembly Member for Delyn, a writer from bemoans the Chester shopper hopper bus and asks for an expanded route to be introduced. I sip my coffee whilst Roxy Music’s “More than this” plays. I salute the musical choice of the owner, with “She Drives me crazy” following on.  A slow stream of customers pass through, a lone elderly woman, and a bus driver.

I am pleased to see the toilets  in the bus station have been refurbished since my previous visit, when the doors were covered with sexual graffiti. Now they are clean, although theres no toilet paper or evidence of a cleaning check sheet.  Heading out I notice a poster championing the numerous festivals (over 30) that happen in Wrexham and the surrounding area. We’ve just missed the Wrexham Dog show, ones for the calendar include a Halloween event and the Victorian Christmas market, alongside numerous musical events. One such event is Underneath the Arches, run by Wrexham Borough Council, taking place at Pontcysyllte Aqueduct this coming Friday. The event is promoted with a giant deckchair outside the tourist information centre.

I venture into the town centre, the sun is shining and the world feels at ease as I note that like everywhere, there are empty shops and a high street weakened by the internet and every other thing. Just like in Chester, the post office is now inside WHSmiths. As I enter the store, Fleetwood Mac’s “Go your own way” plays from a speaker by the entrance, the universe toying with me, but I smile. The unauthorised biography of David Cameron doesn’t tempt me despite being reduced from £20 to £1.

I have a quick walk through the central arcade decorated with flags and colour. Theres some interesting shops in here, and I note a proud member of staff from Carolines’s Viennese Patisserie polishing the tiles outside the well stocked establishment. Patisseries on my mind because the one thats just opened in Chester recently announced its opening hours and disappointingly they are only open for 4 days a week…

The Mouse festival in St Giles’ Parish Church is superb. The Church itself is clearly THE jewel in Wrexham’s crown, with the tower considered one of the Seven Wonders of Wales.  The mouse festival has been created by volunteers from community groups and depicts quirky scenes of Parish life recreated with mice.  The knitted mice are spread throughout the Church, and fun highlights include bell ringers, a marriage (featuring a cat vicar presiding) and David vs Goliath.  The mice are also spread out across the pulpit and the Church organ. Its a great piece of work. After one of the Church staff chats to me “It brings a smile  doesn’t it!” she says. Leaving the Church, the Vicar smiles and greets me, and I stroll onwards. Two street drinkers in the grounds necking cans of lager is the strike of reality here. Anyway, its well worth a visit, runs until September.

Back into town a BT open reach van stops me taking a photo of cleverly named “Fried Chicken UK- FCUK ”  instead some work by street artist Mark Roberts suffices.   In the shopping area, I pause to listen to a young female busker who seems to be singing in the club style.

“If I could see your face once more I’d be a happy girl ” she wails gracefully. “Alone without you by my side” yada yada.  Under the canopy of the closed down Bargain Buys (relocated I think) its bloody beautiful. I have to buy something from The Works to get some change to give to her.

Heaven Cafe , Lord Street is next on the crawl.  After ordering I look up songs with “heaven” in the title for tweet purposes, settling on the recent posthumous release from Avicii. Two elderly ladies chat, with no reference to their cell phones, the plague of modern existence. I browse some leaflets listing events at Ty Pawb, the town’s great hope mixing arts /community space with a market. Looking at press reports it seems to have received a mixed response from the public and some recent council concerns related to funding. The art exhibitions sound interesting however, and the live music programme varied. The cafe meanwhile, is another nice place to sit and ponder. 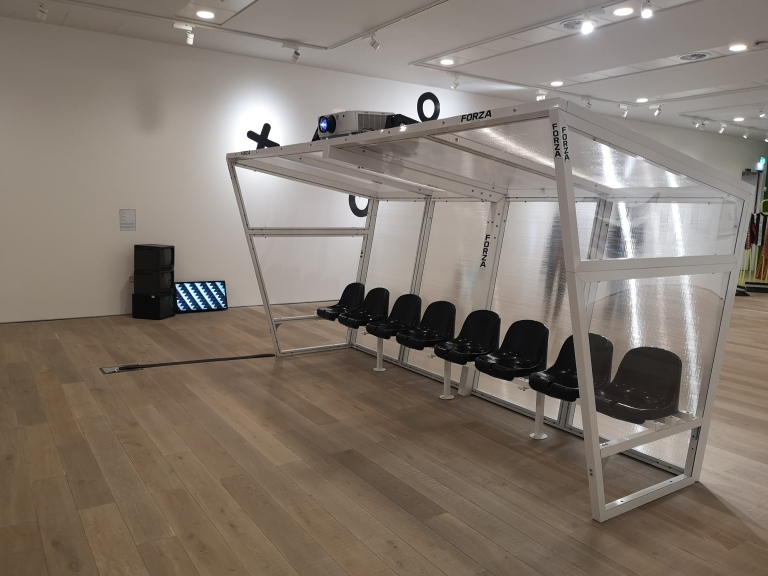 At Ty Pawb I enjoy the football themed exhibition in one of the venue’s spacious galleries. “Futbolka will provoke responses to topics relating to access, equality and inclusion” it says in a press report I look up on the  google. A full size dugout is the highlight alongside a collection of Welsh football related memorabilia.

The food court is busy and I get a drink from recently opened community cafe No. 22. The business operates a “suspended menu” with food and drink donated to local organisations or anyone who claims. “Ty Pawb” means “everyone’s house” in Welsh, and  in general the venue gets our praise, the art is interesting and the food court with a range of cuisine, is a hit. However the market stalls don’t look as busy as they might be, and not all of them are open. The men’s toilets are locked and access has to be provided by staff at the information desk, presumably to deter anti social behaviour.  I’d return as the wi-fi works well once I’ve confirmed my gender, and its a light airy space to people watch and/or brood.

I continue to meander through the town centre , visiting the library which reminds me of Chester’s before the transition/sacrifice to Storyhouse. On the way to the museum, my associate and I chat to a member of the street community. I buy him a coffee from Greggs with the eight sugars that he asks for. “Thanks Sir” he says. Like everywhere in the world, there are people on the street. After seeing two people slumped on the ground, presumably under the influence of drugs, I reflect that you can just as frequently see this happening on Eastgate street. I don’t have the answers.

As I head back to the bus station, the deserted Henblas street comes into view. At one end “Major retailer coming soon” is emblazoned across the former BHS unit. Its been up for months and months. The street itself is made up of an entire row of empty retail units. “That used to be bodycare, that used to be TJ Hughes, that used to be….” says my associate. The void is staring back at this point, although the area may be converted into residential space, and Techniquest  Glyndŵr have lodged plans to turn the old TJ Hughes into a science and discovery centre. This move would surely bring some life back to this deserted part of the town. We have Dee House, Wrexham has this!

Finally attempting to end the day with another independent cafe, we discover that its closed (at 3.15) so have to finish off at the M&S on Eagles Meadow. Despite some recent closures, a Greggs closing can never be a good sign for example, footfall seems steady enough. The city centre cinema is another thing to cherish here. The town guide refers  ambiguously to the creation of the shopping centre as having “changed the towns layout”.

After the surly bus driver tells me to scan my ticket, the journey home is uneventful as a rainy mist descends over the Welsh hills.