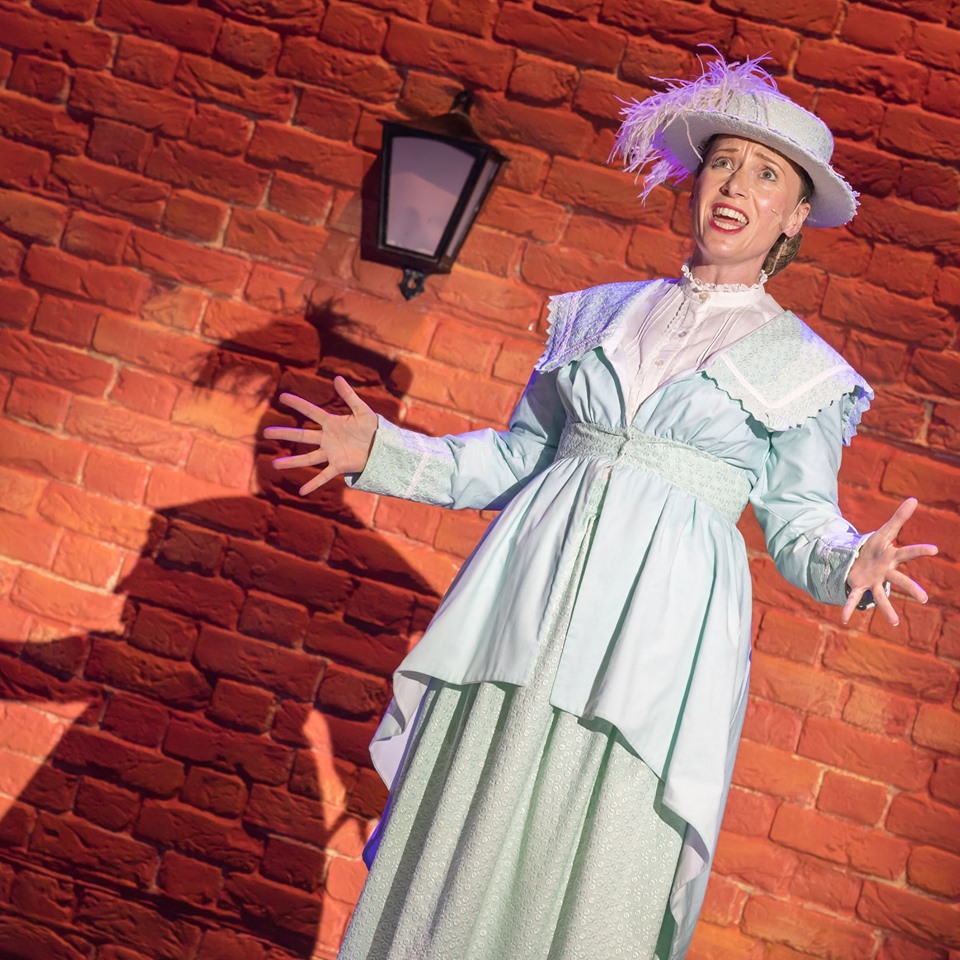 Waiting for this years annual big musical from Tip Top Productions, we fumbled in our pockets for change to buy a programme. But all we had between us was a Ten Euro note. “There’s your friend Phil Cross over there, see if he can lend us 2 pounds!”

“Is he in the show?” asked my colleague.

“Well if we had a programme we’d know!” I replied. (Phil is the director we later discovered) “Maybe we can spot We are Chester and we can borrow theirs to read?” I thought hopefully.

ALL PHOTOS BY MARK CARLINE

For those unfamiliar with the story, “My Fair Lady”,  describes the efforts of the intelligent but condescending misogynist Professor Henry Higgins (Mark Shenton) to turn Cockney Flower seller Eliza (Hannah Thomas) into “a lady” after making a bet with his friend Colonel Pickering (Bill Robertson).  The show is packed with classic songs by Lerner and Lowe, which most will recognise including “Wouldn’t it be Lovely” , “Get me to the Church on Time” , “I could have danced all night” and more.

Hannah Thomas is excellent as Eliza, impressing in both her original  rough accented Cockney and her later refined persona.  Her wounded but noble persona in the face of Higgins harsh treatment (sample dialogue- “put her in the dustbin!” and “if we give her money she’ll only drink!”) was moving, and she shows an impressive command of the songs including the early “Wouldn’t it be lovely”. Dreaming of a better life, the song is introduced with some sweet harmonies from the chorus, as the hum drum real world rolls by alongside Eliza’s wandering mind.  Soon we are introduced to Eliza’s wide boy father, who delivers a rollicking version of “With a little bit of luck”, and is soon happy to “sell” his daughter to the Prof.  Kindly housekeeper , Mrs Pearce ( another Tip Top veteran Fiona MacSween) completes the core cast.

The first half is overlong and the show would benefit from an earlier interval, improving the pacing with the show seeming to peak early with the ball scene where Eliza impresses at her introduction to polite society. However Eliza’s admirer  Freddy Eysnford-Hill (Robert Lyon) delivers a soaring version of “On the street where you live” late on.  The fun continues with Mr Doolittle, himself now  in a higher place in society stealing the night with “Get me to the Church on Time” with the consistently brilliant chorus.

At the end of the show, Eliza apparently rejects her suitor and returns to the man that groomed/manipulated her. I felt no sense of affection between the leads and found the ending to be crushing and bleak as Eliza accepts a life of picking up the slippers of the man who “improved” her for a bet. Or maybe I missed the point?

Theatre Clwyd, always good to visit, is the friendliest of venues and Tip Top Productions, now in their 30th year always have maintained their  record  of quality with this show. The costumes and choreography are excellent throughout. Unleash your inner Cockney, tap your foot and clap along, but maybe  dont get bogged down by the story like I did!