A night time walk around the abandoned city , 8th June 2020

Liverpool Road, heading into town,  I wonder why theres no blue plaque  for Daniel Craig up on the  house he was born.  I suppose the residents don’t want the publicity or groups of tourists on their drive. Still, would make an interesting entry in an Alternative Tourist Guide to Chester that someone should write one day. For when the tourists come back and that. Hopefully by the time they do, the infamous broken wall/ wild flower garden will be fixed… Onto town with the warming sight of the Town Hall ahead in the sober twilight.

Past the closed down VR centre on Northgate street, a good business while it lasted, but from  public apathy and lack of publicity, now gone. Next door the former surgery, once taken over by the homeless protesters, now with its barred windows. The whole block, with 3 distinct architectural styles on show, could be taken over by a super Wetherspoons if the popular Bull and Stirrup expanded sideways. One day it will happen!

Northgate street is changing as shops prepare to reopen and the city awakes from its enforced slumber.  The pavement has been widened to allow social distancing, the red sign feeling like something out of a mirror universe, still surreal as our minds adapt to this totally unexpected world.  Perhaps the long held dream Bohemian street drinking and dining might happen, although the week’s grim weather forecast might make it short lived.

Storyhouse, the best thing to ever happen to us, silenced (apart from online activities) since March 17th, the advertising board outside still showing the abandoned Spring season.  You could always find some comfort in there, or something to tweet about at least. They’ll be back.

I step down Hunter Street to look at the Northgate development site.  The famous yellow bus shacks are still standing after all this time, and people are still bemoaning the moving of the bus station, 3 years later.  The site looks grim, but we are told the construction process is going ahead on the new market and cinema. Chester needs something that’s for sure , to get people back into the city. Maybe they could put in a big Laser Quest in to replace the much missed city visitor attraction. Or Roman themed Crazy Golf housed in a big black and white bunker.

Round the back of the old library I notice that someone has broken lockdown to write  “SUCK YER MA” in white paint. At least they tried to put a message in rather than those boring egoistic graffiti tags.  On the subject of street art, the  painted shipping container has gone to another place. There’s plenty of areas in the city which could be enhanced with professional looking art, what about the white washed , near death experience themed subways? We’ll never learn.

The impressions from the weekend’s peaceful and distanced Black Lives Matter protest are still felt in Town Hall square, with the messages of support and defiance attached to a chain fence.  The messages are stark and haunting and a reminder that the world has much bigger problems than how any of the things people rant about locally.

I walk past the now closed newsagents, a popular haunt of mine for decades. What will this area look like in a decade ? Earmarked for demolition with the closed down McDonalds and the rest of the ageing 60’s bloc, in our dreams it might be city centre housing or a tourist attraction, or not, given the historic pace of change.  I cut down the alleyway next to the Dublin Packet and note the Roman Strong room: when all this is over that deserves a bit of attention and focus.

Approaching Watergate street,  a man is urinating in the entrance alley. “Sorry mate” he says embarrassed.  And then, past the closed down Booth Mansion, closed down Betfred and the now closed down offices of the Chester Standard. Sad to see that one go as I once had a good relationship with the journalists there. But the world is changing and people don’t read papers like they used to, everyone binging on instant free data feeds on twitter. The internet, the great leveller. Still, the shiny new Stile Napoletano offers some hope for the new world as soon as diners are allowed to enter the premises.

Through town I continue, stepping onto the rows ( which will soon be one way) to avoid the pavement scrum outside Five Guys. I walk through the failed dining quarter (Bar and Block Steakhouse coming soon, says an optimistic hoarding) and cut down Albion Street to get onto the walls.  Years ago in the first bloom of social media “fame” we stood up here watching the filming of Foyles War, the street mocked up to resemble a 1940’s marketplace. In the thick silence memories so easily come to the fore, there was the site where the abandoned car was parked with weeds growing on it etc.  Atop the Newgate the Lion looks bored, surveying its kingdom ( another one for the tourist guide) and on the other side Dee House looks a grim as it has done for a decade.

The TV screen in the window of Cruise, still on playing its promo videos of care free revellers in an endless pointless cycle. The street is deserted as is Eastgate street, lit up by a golden tinge reflecting on the cobbles. It is a magical view, always. 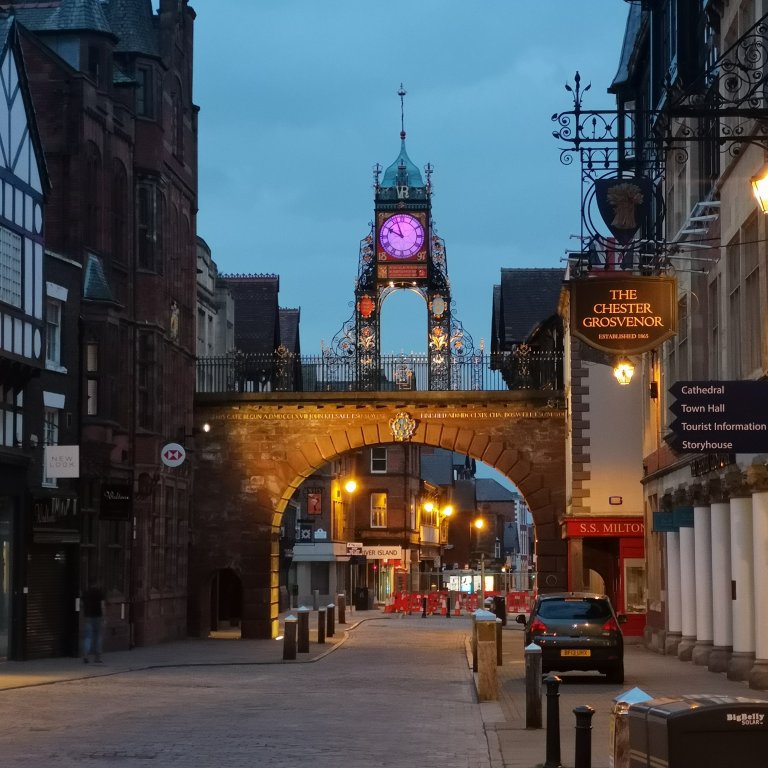 The last leg of the walk takes me to the Town Hall to see it lit up in support of Black Lives Matter. “Virtue signalling!” shouts an angry tweeter at me but I ignore it.

I stand there alone in the void, listening to the birds,  until a man on a scooter goes past, and I can hear every movement of its engine. In our lifetime, there will never be another period like this. The emptiness manages to be beautiful, sad, soothing and distressing at the same time.  I wonder what all the city’s ghosts are doing to pass the time, have I even become a ghost myself? 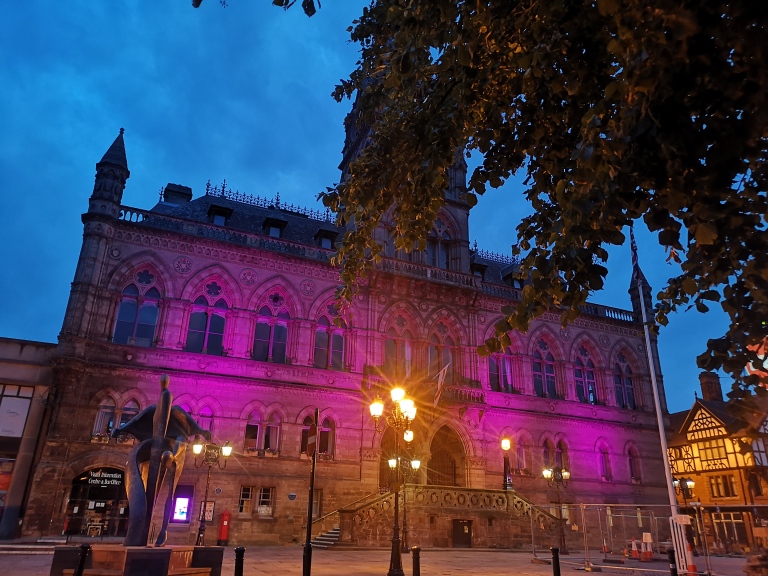 Doubling back to leave the city limits, I notice a big sign in the window of GAME ( plus the shop sign has gone) saying they have “moved” to the Coliseum  Oddly worded given that the store has been open in the Port for a long time, so nothing has moved, its just another closure, I think Pizza Hut did the same trick years ago. Sad to see but who shopped in there anyway? Another  another vacant unit on the city’s premium shopping street freed up ,  but I smile at the news of Home and Bargain applying to take over the old Wilko unit. That will be a decent shot in the arm for Chester and a photo opp with the Lord Mayor and a costumed character, we hope.

As the lockdown eases and fades into the “new normal” we can reflect on how this period has changed us for better or worse. A lot of people did great work for others in the community, a lot of takeaway meals were delivered, and most importantly the NHS staff fought their daily battle for us all.  For many of us we consider  the lost time and the lost meetings and the lost friends. The anxiety and the days merging into one…but at least we got the money out of our Netflix subscriptions.  I smile sadly.