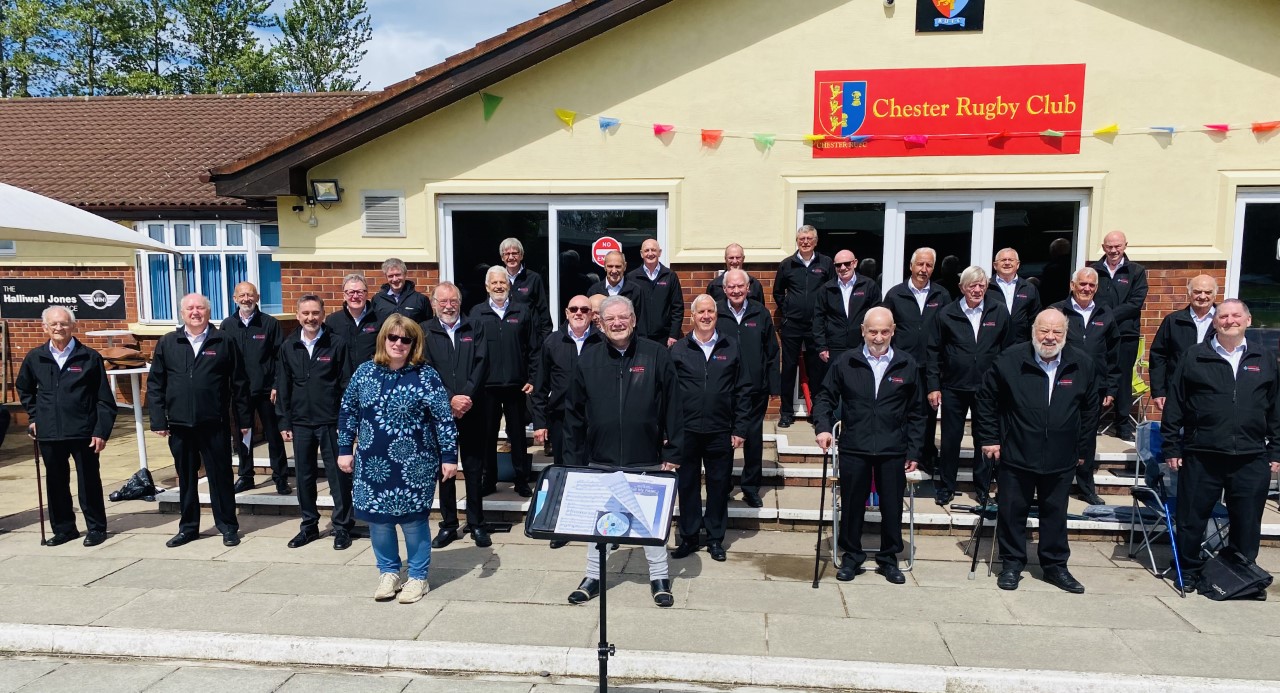 The Chester Male Voice Choir has held its first face to face rehearsal in over a year following the easing of lockdown restrictions as it makes plans to celebrate a special anniversary.

Speaking about getting together in person after such a long gap, choir Chairman John Walsh said “The weather was fortunately kind to us and the excellent turn-out showed how much members wanted to get back to singing together. We are grateful to our MD Rod Jones who turned out to lead us on his birthday along with Helen Jackson our accompanist. A programme of songs was selected that avoided loud singing and several breaks were taken in the planned one-hour session. It was gratifying to see that, despite such a long period, we made a decent job of our first sing in over a year”.

Despite lockdown restrictions, since March last year, members of the choir have kept in touch with online Zoom meetings twice a week. These have included all manner of social activities, the learning of new songs in the safety of their own homes as well as being kept busy contributing virtual performances to various local online events. The choir also produced 6 lockdown videos, all of which are available to view on the choir’s YouTube channel. With no revenue from performances to contribute to operating costs during the lockdown, the choir has been grateful for the support it has received from its President the Duchess of Westminster and also from The Ursula Keyes Trust for the provision of a grant enabling the purchase of updated stage equipment.

The choir has also recruited several new members during the year and is now making plans for a return to regular rehearsals in July as well as live performances. Their first concert of 2021 is planned to take place at St Columba’s Parish Hall in Plas Newton on Saturday 18th September. John said “We so want to get back to performing for our supporters and followers and are making plans in the hope that by that date, we will legally be able to do so and can be satisfied as to its Covid safety.” John added “this will be a first opportunity for new members recruited during lockdown to perform with us. I do believe that the constraints of lockdown will have focussed the minds of many men in the locality towards wanting more from life both socially and musically and they are invited to contact us to learn how easily they could make that a reality”.

The face-to-face get together at Chester Rugby Club was also a chance to remember two long serving members of the choir who sadly passed away during the lockdown, Bob Cunningham and Mike Heathcote. Bob was honoured posthumously with a special long service award received by his Widow Sheila last year and Mike was awarded an Honorary Life Membership just weeks before he sadly passed away in November. Speaking about the immeasurable contribution both had made during 60 and 50 years’ service respectively to the choir, John Walsh said “It’s incredible that these two stalwarts of the choir gave such significant service but it’s a measure of the enjoyment and camaraderie that comes with membership of a choir and our choir in particular. They are both sadly missed and will be long remembered”.

During the rehearsal, presentations of Honorary Life Memberships and long service awards were made to Lance Howie marking his more than 30 years and Derek Hewson in recognition of 40 years with the choir.

2021 marks the 80th Anniversary of the choir which was originally formed in 1941 as The Cestrian Male Voice Choir and the management committee is currently working on plans to celebrate this major milestone with events being staged throughout 2021/22, including a special 80th Anniversary Concert with Foden’s Band at Chester Cathedral on 16th July next year.