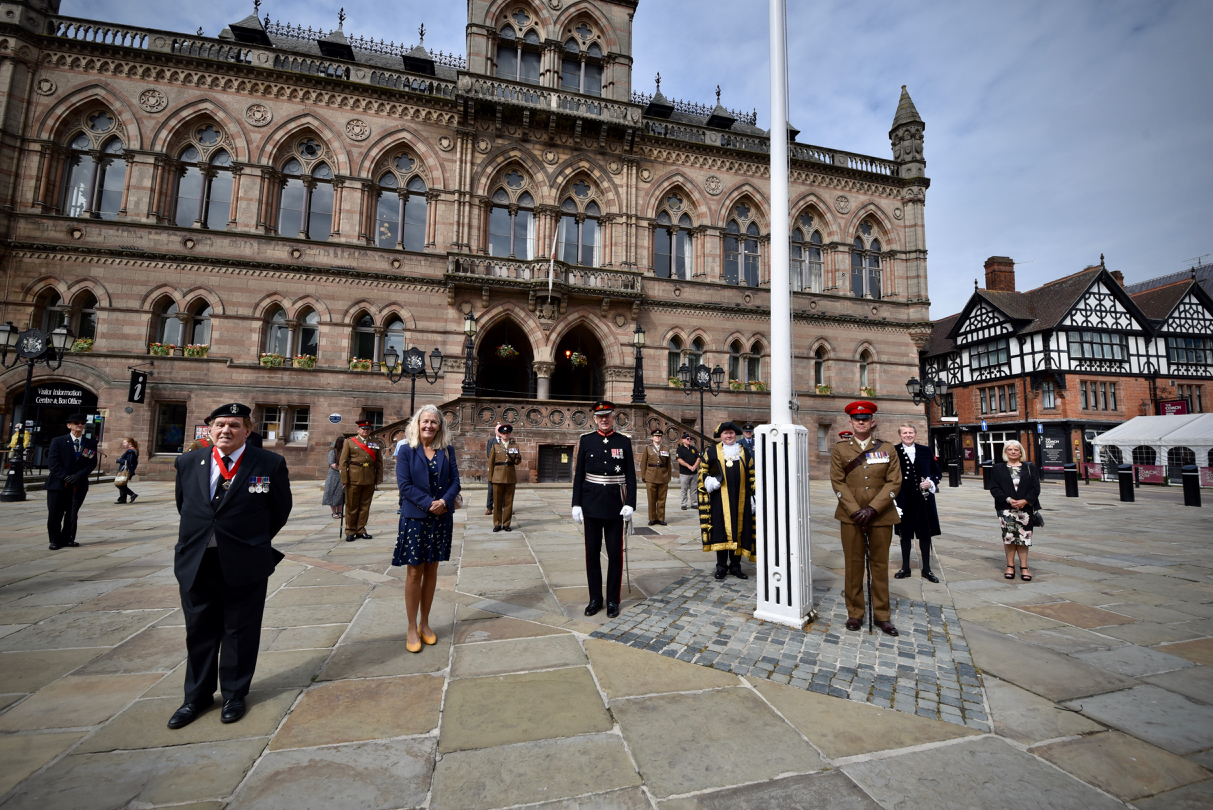 The Chester Blue coat centre (Northgate street ) is holding an outdoor Arts and Crafts fair, this Saturday 26th June. Running 10 – 6 , the event will feature fine art, ceramics, glass, jewellery, textiles and more, from 13 local artists. The event will be held in the courtyard at the front of the building

Independent history magazine, Inside History Magazine, (INSIDE HISTORY (ecwid.com) based in Chester, has been nominated for a “Cover of the month award” by the British Society of Magazine Editors. The June 2021 edition which features the suffragette Christabel Pankhurst and covers the theme of protest , from the events of Peterloo, to the fall of the Berlin Wall, is up against issues of Empire, Good Housekeeping, Which?, Saga magazine and others. The winning cover will be decided by public vote :

Councillor Brian Jones, the Council’s Armed Forces Champion, said: “Armed Forces Week provides an opportunity for the British public to show  its support to the men and women of our armed forces community, including regulars, reservists, veterans, cadets, service families and the wider armed forces family in society.

“This important week allows all of us to acknowledge and celebrate their outstanding contribution to our country. As a Council, Cheshire West and Chester recognises and admires the commitment and sacrifices that our Armed Forces make on our behalf.”

The UK Armed Forces defend the UK and its interests. Over the last 15 months British military personnel from the British Army, Royal Air Force and Royal Navy have been a key part of the UK’s COVID-19 response both at home and overseas, with the Armed Forces now engaged in a major role in the provision of testing and vaccination services.  This month the Armed Services will be on hand to support the NHS and local authorities in delivering some elements of the ‘enhanced support’ recently announced by Government for areas such as Cheshire West and Chester, which has seen a steep rise in the number of cases of the Delta variant of COVID-19.

Chester Heritage Festival continues this week (HOME | Heritage Festival (chesterheritagefestival.co.uk)) . Thursday will be the debut of “Brassey: a Life in 21 monologues” by Chester writer Claire Dudman. The story of the “Greatest railway builder in the world” is an online movie which will be available to view until the end of the festival. Meanwhile Sat 26th June will see an online tour of the amphitheatre, and the 28th offers an exploration of the archaelogy of the Northgate development site.

The Cheshire Prize for Literature 2020 takes place at Storyhouse on Friday evening. The event will be streamed live with guest speaker, Daljit Nagra, Chair of the Royal Society of Literature. The judges, William Stephenson , Alex Clifton , and Si Poole , will choose one winner from the categories: poetry, short fiction, children’s literature and scriptwriting. They will be looking particularly for original and inspiring responses to all aspects of the pandemic including “lockdown” and what has become for us all the “new normal”.

Big Heritage’s new medical themed attraction Sick to Death has attracted almost 5000 visitors since opening and now has a waiting list for school visits. Featuring the ever popular Plague Doctor, the site tells the story of how medicine has developed over 2000 years and explore plagues, pandemics, the birth of science and the future of medicine. Meanwhile Big Heritage have teased their takeover at the Dewa Roman experience . scheduled to reopen later this year following substantial investment

Gandey’s Circus “Unbelievable Tour” is at Ellesmere Port until Sunday 27th June. Discount code EP50 will give 50% off ringside and premium seats (not in conjunction with other other offers”. The circus has reopened with social distancing and enhanced hygiene and safety measures to protect artists, staff and the audience.