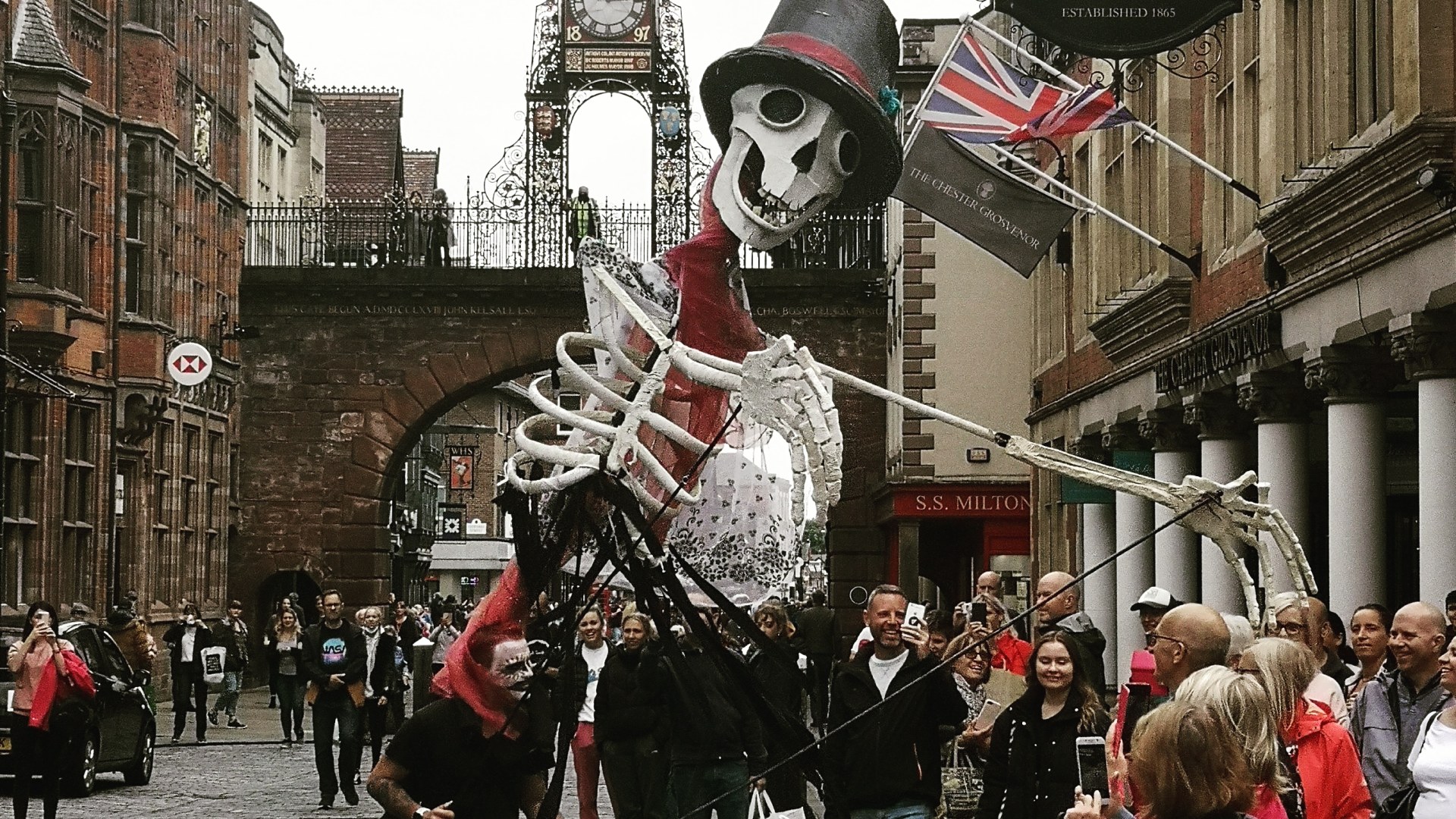 Remember when people said that the buses wouldn’t fit in the new bus station?? I think to myself as I arrive in the city. The same kind of doom fantasy alongside multiple deaths on Frodsham Street ,or the city “falling” as soon as this or that retailer closes.

The city streets are slick with rain, the skies are black and a Ginger Scooter swerves to avoid me on the pavement. Its a good job Chester Pride went digital today. Yet I’m positive with a lot going on in Chester, and back in the lone wolf mode ready to capture each moment. Firstly I drop into Rufus Court, and notice 2 new businesses. The Venetian (Cicchetti and lounge bar) will be filling the unit recently vacated by Off the Waffle, and Native is a natural wine bar & bistro from the team behind Hypha. Two bits of good news that former friends at Cheshire Live would have jumped on, in another time anyway. Instead click here to find out when the new Lidl in Crewe is opening. A sad trend of the last couple of years as journalists have been largely shifted to the periphery by their moneybags owners (Reach PLC operating profits of £68.9 million in the first half of 2021) But I’m not bitter. Maybe people just love reading about luxury homes they will never live in, or series 14 of Real Housewives. Swinging back to the light side with the Taste Cheshire Market back in Town Hall square, plus a new pop up gallery in the old newsagents.

Up on a pillar in the Forum is a presumably unofficial notice urging Cestrians into action over “Article 61” advising peaceful dissent “when you hear the call to action”. The reference to Magna Carta makes me question the motives of the poster and I wonder why Forum staff haven’t spotted it. I call into the market to put up a sign on the Lego display, with Chester Women’s Aid taking over as our charity for the last year in the old premises

The market food court is fairly busy although recent power cuts have caused huge and unacceptable disruption and losses for traders The area around the display, now including Lego Matt Hancock also feels barren following the recent departures of Steins and Reflections. “Any toilets in here?” asks a Scottish woman as I exit the building, and the answer, following the recent fire, is no. Its a challenging time, but I sigh at conspiracy theorists claiming Cwac are deliberately sabotaging the market. That’s what the Flat Earth lot were saying! Its as if people think the illuminati are up in the market offices rubbing their hands with glee as they pull all the power levers down.

The main event of the day is the return of The Midsummer Watch parade in a reduced but very welcome form. To avoid crowds forming there had been no publicity for the event, which has been split into 5 mini parades featuring community performers and the puppets of cultural hero Russell Kirk. Before the parade I bump into old friend photographer Mark Carline. We watch the performers assemble at the back of the soon to be condemned Forum Studio theatre. In the early days of the account I would often see him at parades and cultural events, and our mutual support for Chester made us friends. Its rare for someone to stay with you on the whole journey, as so many move on in their lives, abandon twitter or otherwise ghost you. Bit some people have. Waiting for the parade on the rows, a small crowd formed at the Cross, phones held aloft, the sound of the drums takes me away once again.

As a prelude to hopefully larger scale events later in the year, seeing the parade for the first time since 2019 is a release and a step closer back to the world we once knew. As the parade turns back home along Watergate street, we encounter the Town Crier, who joins in the fun. “What’s that in aid of?” asks a perplexed Scouser.

I head back to the Town Hall Square to browse the market there, and wait for the second secret parade. Wedding guests mingle with other visitors and the doom preachers by the Elephant, although they seem less aggressive than usual. An acoustic “Praise the Lord, let the people rejoice” mingles with the sounds of the street. Then a speaker pipes up: ” Does anyone want to know what the most important book in the world is ? Would it shock you if I said its not The Bible ?” The answer he says to anyone listening is The Lambs Book of Life ( not available on Amazon) and I have to google it to find out its the list of names whom God is allowing into Heaven, like an afterlife guest list. After buying some fudge with a few minutes left to kill I have a quick look round HMV, and the sight of a notice board filled with forthcoming gigs gives me an uplifting feeling and reminder of life before the Dark Times…

The times of old are back again as I watch the next parade , a giant skeleton puppet interacting with the public, I waiting for the money shot n front of the clock. Other participants include a jester on a children’s tricycle a Devil and a Raven, all no doubt causing the Town Hall preachers extreme angst. The Parade is one of the many things that makes Chester special, drawing and building on our past, involving the community and spreading some happiness. “Its nice to see some smiles again” a tweeter comments.

Next spot on the days itinerary is a visit to St John’s Church, the city’s original Cathedral, currently undergoing some essential repairs and renovation. Two years at least since I last entered the building its features include the remnants of a medieval painting of St John the Baptist, and the organ played at the coronation of Queen Victoria. The Church also holds some evidence of Viking life in Chester, with stones on display dating from 900AD – 1100AD. More people should come here. Outside a small encampment of modern Vikings have pitched their tents. Unknown Vikings (https://www.unknownvikings.co.uk/about-the-vikings) . The group “aim to show aspects of life in and around the Chester area and beyond between the years 902AD and 1072AD.” . They will return to St Johns on the 11th September.

Scooting back forward in history a 1000 years, another escooter with 2 riders passes me near the bus station as I cross town for the final stop of the day. Unfortunately any local debate about scooters has been stifled, even if you’re actually in favour of them, the kids riding them, the pavement riders, its just answered with “yeah but what about cars?” Through the Supertrees subway, now a thriving garden area with plants climbing steadily up the structures, the area is hosting a musical fundraiser for Soul Kitchen. I stay briefly and give a thumbs up to Supertrees founder Steve from a distance before slipping back into the rain.

Carriage Shed, happily undercover is full of shoppers browsing the artisan goods. Christmas 2019 was the last time I came here. The event is well run, although some people are ignoring the one way system, what can I say , I like order, I’m even frustrated by WHSmiths axing their one wat system. Carriage Shed has been an excellent addition to Chester since it opened back in the spring of 2016. In the glory days I attended the opening, munching canapés with Cllr Mike Jones. 5 years ago I think with the weight of so much history on my shoulders, before throwing the thoughts back into the rag and bone shop of my heart. I buy a bacon and black pudding tart from the stall of hero chef Phil Jones.

Back home , pleased to see Chester in Lego has made the weekend in Chester article in todays i newspaper. Next target is a photo shoot for Cheshire Life magazine.