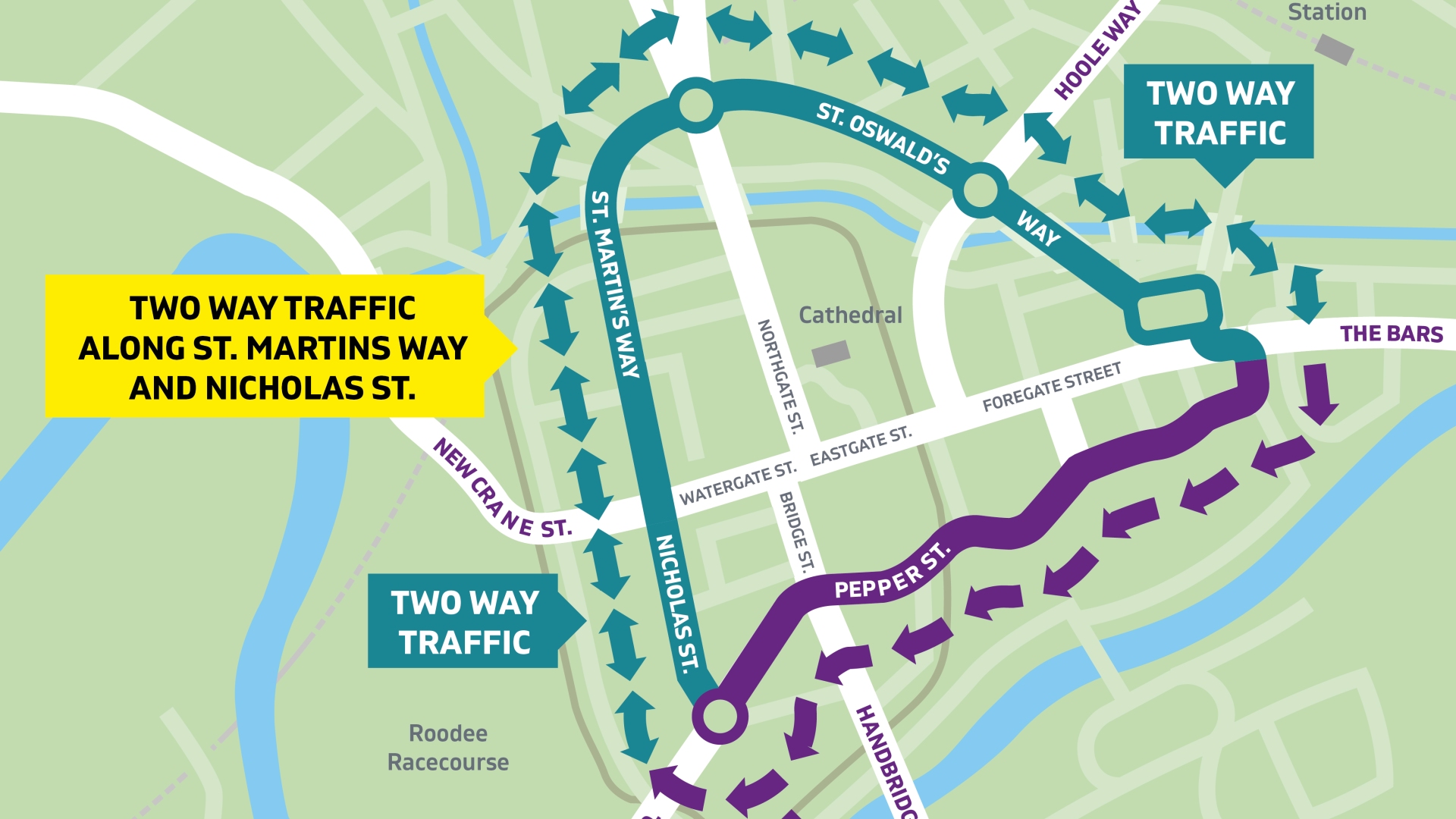 The one way system around the city centre, in place since November 2020 is to end :

After the first phase lifting in October last year, the second phase will see St. Martins Way reopened for southbound traffic on 20 February. This will be followed by a third and final phase commencing on 27 February when traffic around the amphitheatre from Love Street to Pepper Street will at first be open with one lane for westbound traffic only, and then a week later revert to two-way traffic on 6 March.

Following the completion of the tunnel works along the inner ring road, and first phase of reverting Nicholas Street to two-way traffic in October, plus the reopening of Nuns Road in December; the second and third phases of lifting the Clockwise diversions have been designed to allow traffic to safely return to normal after over twelve months of diversions.

Drivers will need to take extra care during this process to become familiar with the changes. This is especially critical for the stretch around the amphitheatre where traffic has been flowing one-way in both lanes westbound.

To help ensure drivers are aware of these changes additional signs and lane markings will be installed as part of the process, and a 20mph speed limit will remain in force.

The Clockwise diversions were established in November 2020 to enable the construction of a new surface water drain under the historic city and the Northgate development construction, the biggest infrastructure projects in Chester since the inner ring-road was built over 50 years ago, with eight tunnel shafts dug along the drain route, each over seven metres wide and up to twelve metres deep.

The one-kilometre long surface water drain has been a vital environmental investment to remove surface water from the city and reduce the need for untreated sewage discharges into the River Dee, due to heavy rainfall when the network is already at capacity, as well as providing additional drainage capacity for further city centre developments in the future.

While the Clockwise diversions remain in place, to help reduce congestion drivers are recommended to consider using public transport, to cycle or walk where possible; or to plan their journeys in advance and allow more time, travel at a less busy times or take alternative routes into the city.

Where feasible through traffic should use the A55 or via Queensferry to bypass the city centre from the south , North Wales and Wrexham; or via M56 and Queensferry from the Wirral and Neston direction.

Works on the new drain outfall into the River Dee are continuing into March due to the discovery of uncharted underground pipes along the riverbank. This has required additional diversion works by Severn Trent Water and will result in the continued closure of the central section of Castle Drive until these works are completed. As a result, access to the Little Roodee Car Park and Covid test site will remain via Grosvenor Road only and access to the University’s Riverside campus via Lower Bridge Street only.

Councillor Karen Shore, Deputy Leader of the Council and Cabinet Member – Environment, Highways & Strategic Transport said: “I would like to thank everyone impacted by the drainage tunnel works for their patience and understanding, and I appreciate they have caused significant delays and inconvenience to many, particularly while the recent highway reinstatement works have been underway.

“I know the removal of the Clockwise diversions will be very welcome news; although regrettably the effects of the Covid pandemic on skilled labour and material shortages have resulted in these works taking longer than planned. However, the long-term benefits to the city for residents and visitors will be huge and I am eagerly looking forward to the opening of the Northgate development later this year.”

Further details are available at http://www.clockwisechester.com