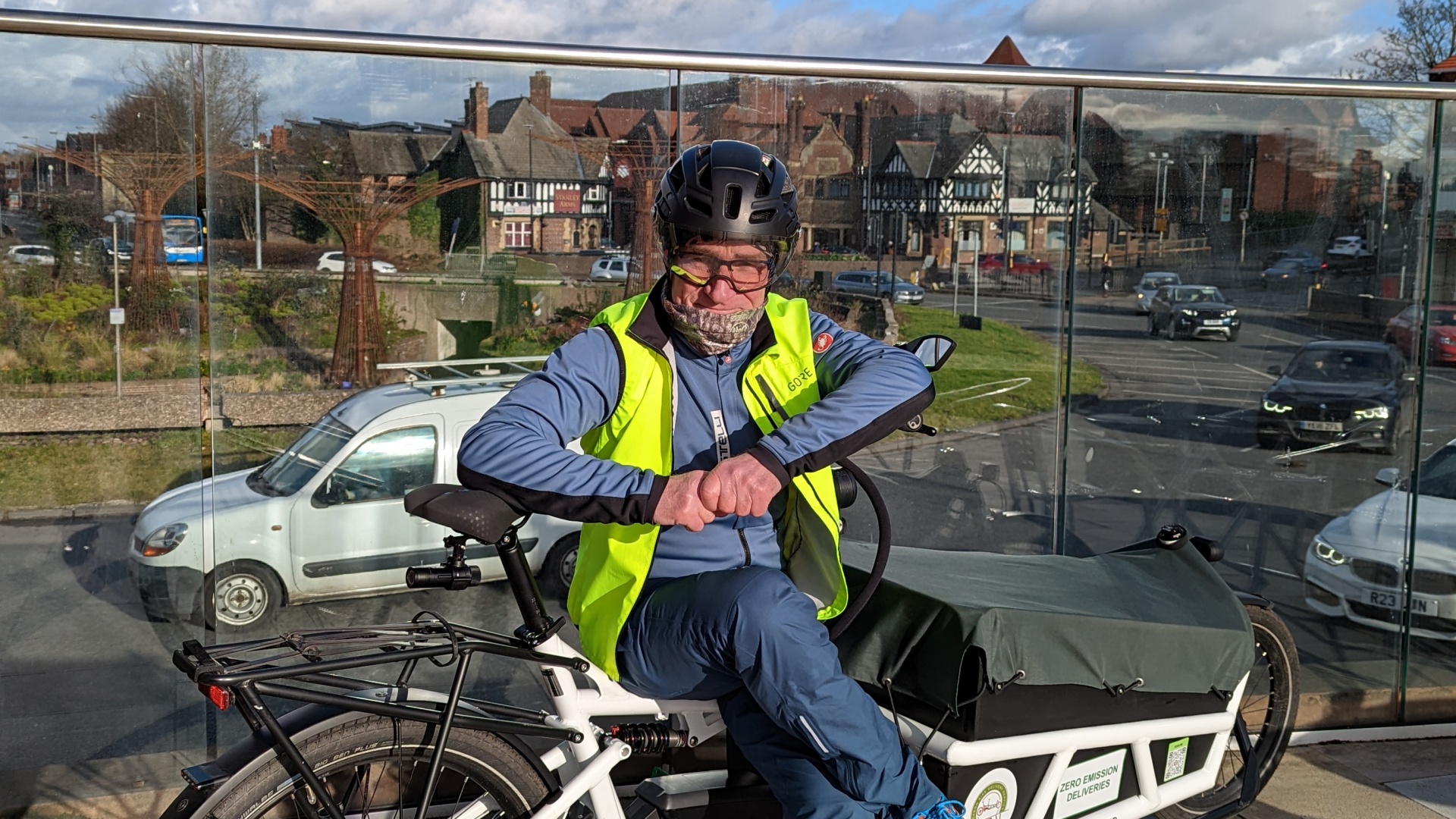 In recent months, Chester observers may have noticed Paul Buckley on his eCargo bike dashing nimbly through the city centre making delivery runs for local people and businesses. Paul, 62, originally from Burnley says he is looking forward to playing his part “towards a cleaner, greener and more sustainable future ” as well as supporting his local community.

“My aim is simple, to try and sustainably link the city of Chester and it’s communities with an emission free and environmentally friendly delivery & collection service completed” says Paul. He met his wife in Chester during his army career when he was posted at Saighton Camp. After serving 22 years in the Forces and 18 years working as a property controller in Windsor he returned to settle in Chester 4 years ago. Back in Chester Paul worked for his friend and was making lengthy commutes across the region in his car. “The level of traffic was turning me into an angry person, I was getting depressed about it. I decided to retire, sold my car and bought the bike.

“I’d been researching it for a while during lock down because it was something that I fancied doing. I wanted to help people. The essence of what I’m doing is that I’m here to help. I ride bikes in my spare time and I bought this specifically to be active. ” The bike weighs 40kg and is powered by 2 batteries which provide assistance up to the legal limit of 15mph. “Everything is controlled by the hub on the handlebars via an app.” The Cargo area is relatively small but can be loaded up to the level of the handlebars for bulkier loads. He says that the bike could even be used to deliver large items like a fridge. “With a trailer on the back I could carry a freezer!” he says confidently. “I haven’t been fully tested yet with the load. I have filled the box fully with cheese and delivered it to the butchers in Handbridge. ” The bike can also be configured to carry child seats. ” If you wanted to transport children to school its easy to do it. It helps to reduce all the short journeys people make , its all about having the will”

Currently Paul is working with several businesses across Chester including Kookaburra Bakehouse, Fika (Vegan bakery) , Koow (Christleton) Januty Goat, The Cheese Shop and other on an adhoc basis. Monogram Laundry are a frequent pick up point for Paul: ” I pick up for a lot of elderly people. I collect their laundry, and take it back to them, I charge £3 per delivery. Its not about the money, I’m doing it to help”. Paul has received numerous accolades on social media for bespoke service and support for people in the community including one commenter who told us he was “really helpful to us older persons. ..because he does deliveries from Chester independents which I’ve missed since losing my mobility.”

Alongside his delivery service, Paul is vocal on twitter about cyclist issues and often vents his frustration about the lack of care shown by some drivers. “I’m all in agreement for the new Highway Code provisions that have been put in place, its all about safety. Yes I do have a go at some of the drivers. I’ve got cameras front and rear, I use them during busy periods because sometimes people aren’t nice. I’ve ridden across Europe twice , the worst place was Serbia, the driving there almost had me in tears. Over here I think they’re puppies ! I do get frustrated by the lack of consideration, everybody is in a rush. I can understand why because I’ve been in that same situation.

“When I ride through town every morning I see the weight of delivery vehicles, vans and cars. I can understand the big ones but theres a lot that local people use that can be cut out. For me I’m just doing the best I can to reduce that. Ideally I’d like to have a hub somewhere, with 2 or 3 bikes. In London eCargo bikes are everywhere, its the same in Manchester. In Chester theres nobody else doing it. ”

Of the new Northgate car park currently being built he says that “it would probably would have been better if there had been an emphasis on cycle parking. Its always a concern leaving a bike out of sight for a long time. I think that’s what we’re lacking in town, the parking is inadequate and not in the right places, they should be in the middle, to encourage people to come in. Also I’m up for any type of cycle lanes, anything is better than nothing. I am in favour of the escooters. I do see people abusing them, but anything that gets people out of cars I’m in favour of . Theres always idiots and the problem is lack of enforcement. If we had more enforcement life would be a lot easier for people on two wheels !”

To get in touch with Paul visit his website : https://www.ipedalcargo.co.uk/