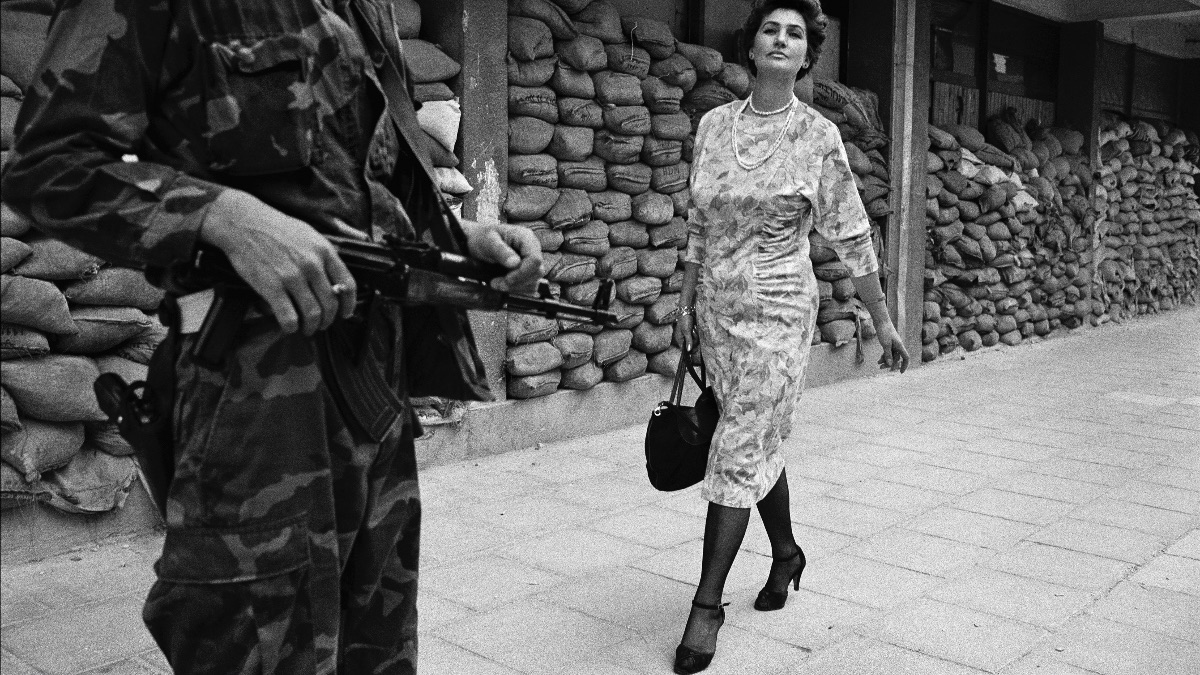 Extraordinary Women: Images of Courage, Endurance, and Defiance’ Featuring photographs by the award winning Tom Stoddart (1953 – 2021)  is a thought provoking and moving exhibition which presents ” the endurance and iron will of women in extreme situations of war, poverty and hardship.” Documenting the human response to situations including the fall of the Berlin Wall, wars in Yugoslavia and Lebanon and the HIV/AIDS pandemic in sub Saharan Africa, the exhibition which runs until the 11th of July is a partnership between the Cathedral and Chester Women’s Aid. Sharon Price, co-founder of Photo North and curator of the exhibition, said that “Tom was a guiding light towards the truth and the good for many, it was an honour to be personally asked by Tom to curate this exceptional body of work for Chester Cathedral and to be able to bring it to the people of Chester.”

Speaking at the launch of the event the Dean of the Cathedral Dr Tim Stratford commented that “An exhibition like this is one way in which a Cathedral talks to its community and we are proud to speak through Tom’s voice this exhibition . The works speaks loudly about the resilience of the human spirit and its tragedy and devastation and particular the resilience of women.. So Tom speaks with a voice that is consistent with what we as a Cathedral want to say as a community.”

Angela Benson, Chair of Chester Women’s Aid said that “Chester Women’s Aid (CWA) are honoured to partner with Chester Cathedral for the Extraordinary Women exhibition. Both the artist Tom Stoddart and CWA share the desire to celebrate and make visible the courage, endurance, strength and defiance of women in hardship. We believe in the right of all women to live free from fear and abuse. This thought provoking and inspiring exhibition demonstrates Chester Cathedral’s position as a cultural and social cornerstone of our community, and we are proud to support them in this event.”

Professor Emma Rees of CWA spoke of the role played by the charity in Chester as well as noting the unfortunate timeliness of the exhibitions themes given the current war in Europe. “Disproportionately at times of crisis its so often women who have to role up their sleeves and get on with it even when feeling threatened and alone. What all of the volunteers at Chester Women’s Aid know is just how fragile and permeable the line is between a secure home life and uncertainty and fear that come with domestic abuse The slippage from one of these to the other can come suddenly and in the most unexpected of circumstances. We only have to ask women living in Kyiv or Mariupol to see how the safe and familiar can be wretched away in a heartbeat.

“In seeking to offer support we not only look at individuals but at the bigger issues too, structural and systemic factors which sadly necessitate our works of charity. Its an odd situation being part of a charity where you want that charity to put itself out of existence and not have to do what its doing anymore.

“We were founded in 1976 and our core business is the provision of emergency grants to local people who because of domestic abuse find themselves often without the most basic items, from children’s toys to curtains to clothing. As well as that we work to raise awareness of domestic abuse in organisations of all sizes, thanks to the financial support of the PCC, both current and former. Perhaps unsurprisingly over the last 2 years there has been a sharp increase in demand for our support. To give you a sense of how much our services are needed in this very prosperous city, between March and September 2021 we gave out emergency grants totally £5500. Money raised by volunteers for survivors when statutory funding or the unfair and shockingly administered universal credit system for example fell short. Domestic abuse is a much misunderstood and multi faceted issue ranging from coercive control, gaslighting to rape and murder and all points in-between. Domestic abuse can happen to anyone at anytime. Cis men, trans men, gay people straight people rich people poor people, of any race and any age.”

Extraordinary Women’ runs until Monday 11 July.  The Cathedral is open 10am – 5pm Monday to Saturday and 12 noon to 5pm Sundays.