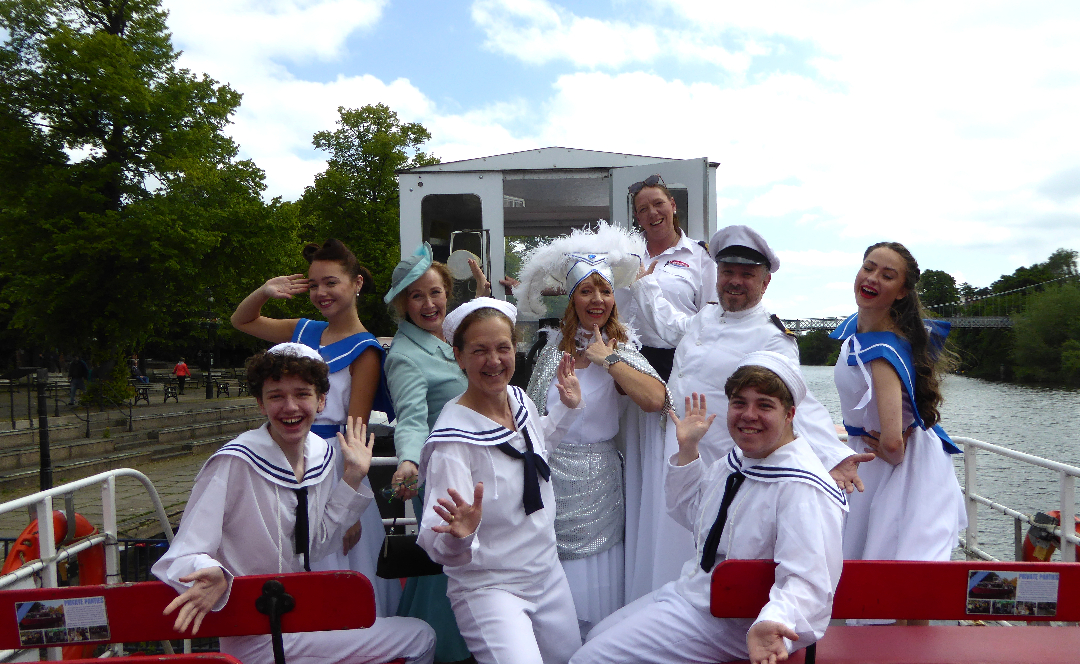 Deeside based Dee and Alyn Gilbert and Sullivan Society will stage the popular West End and Broadway musical “Anything Goes” at Theatr Clwyd near Mold from Wednesday 15th June – Saturday 18th June at 7.30pm with a matinee performance at 2.30pm on Saturday 18th June.  The show marks the society’s return to Theatr Clwyd for the first time since the Covid-19 pandemic.

Cast members took the streets of Chester and Mold recently to publicise the show and even hopped onboard  “The Jackie” on the River Dee to get in to character for the nautical themed musical, courtesy of pleasure boat operators Chester Boat before visiting various shops and businesses in Mold including Cravin’ bakery on Daniel Owen Square in the town centre to hand out flyers for the show.

With music and lyrics by Cole Porter, the show will be co-directed for Dee and Alyn by Ruth Roberts and Joni Rusling with musical direction by Steve Roberts.

Featuring a host of well-known songs including “You’re The Top”, “Its’s De-lovely” and “I Get a Kick Out Of You”, “Anything Goes” centres around the madcap antics aboard an ocean liner, the SS American, bound from New York to London. Billy Crocker is a stowaway in love with heiress Hope Harcourt, who is engaged to Lord Evelyn Oakleigh. Nightclub singer Reno Sweeney and Public Enemy Number 13, “Moonface” Martin, aid Billy in his quest to win Hope with hilarious results. The show has been undergoing something of revival, with a production which opened at the Barbican in London in 2021 starring Robert Lyndsey, Sutton Foster and Felicity Kendall. The production is currently touring the UK.

Speaking about returning to Theatr Clwyd for the first time in 2 years, the show’s co-director Ruth Roberts said  “Dee and Alyn were the first ever company to perform on stage at Theatr Clwyd and what better way to return than with the huge splash that is “Anything Goes”, a musical packed with great songs, quirky characters, several love stories, a hilarious script and THE best people to work with. It’s definitely the tonic we all need.”

Full details of “Anything Goes” can be found at www.theatrclwyd.com where tickets can be booked online. Alternatively, contact the box office on 01352 344101