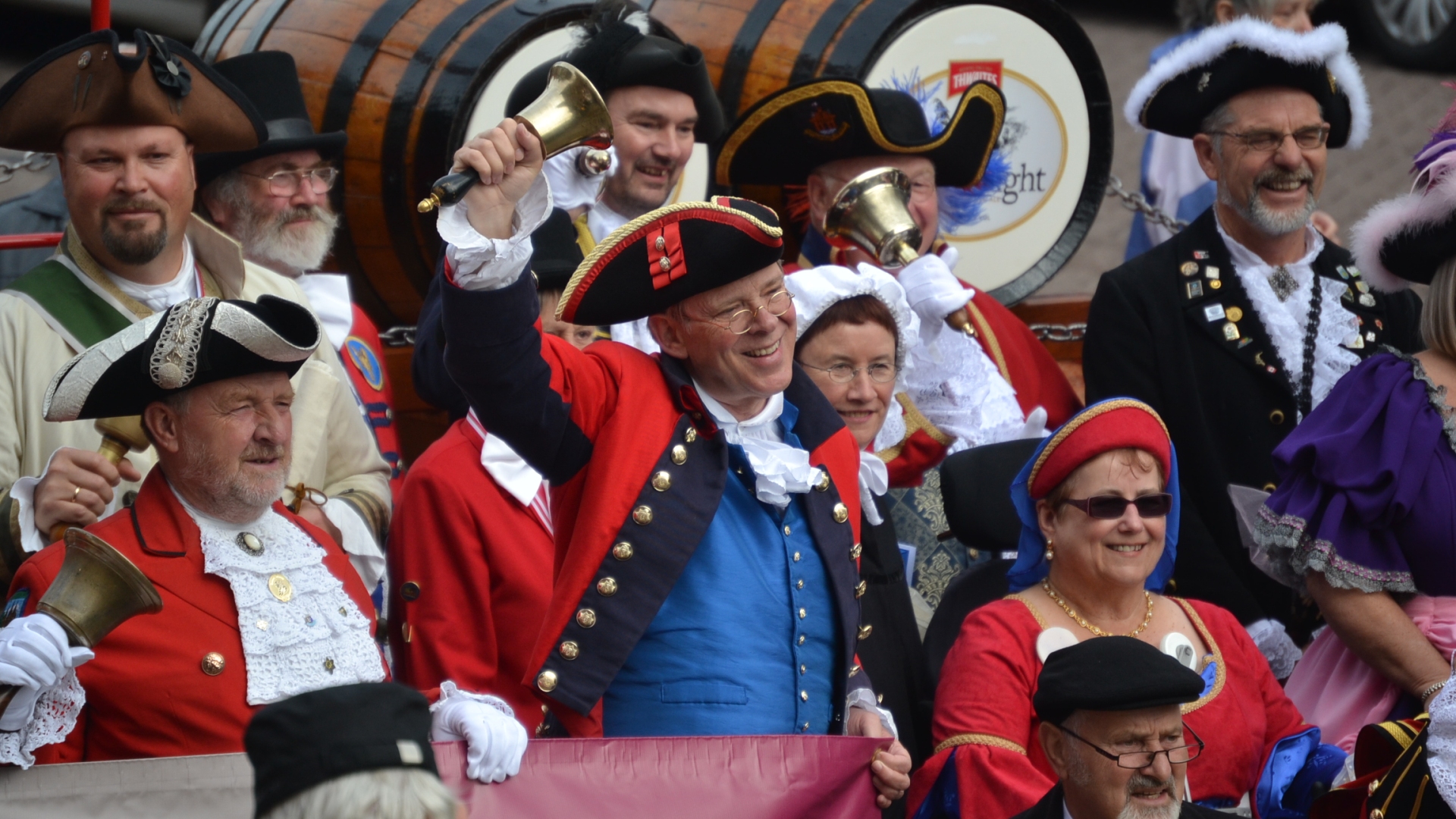 David Mitchell, the celebrated town crier, is a well known public figure with his cry of “Oyez! Oyez! Oyez!” adding interest to the streets for both tourists and Cestrians alike. Chester is unique as the only place in Britain where regular proclamations at a fixed time and place have been retained. Proclamations at the Cross have taken place since the middle ages. I was very grateful to spend some time with him fresh from hosting the World Town Crier Tournament. Over a latte in the Coach House David explained how he got into town crying:

“It came about when we were getting ready to get married, which was 25 years ago now. We decided to have a historic theme to the wedding. We had various historic elements, such as the bride going to church in a horse drawn carriage”. David became aware of the Chester Town Crier and asked him to take part in the wedding, waking up his bride in the morning. This was agreed, but the crier had to drop out due to a double booking with a competition in Hastings. However David didn’t give up, and performed the role himself : “I stood beneath the window shouting: ‘Arise fair maiden, cast off thy slumbers!’.” Some years later, the Chester crier was stepping down and David applied for the role.”I think there were 6 applicants at the time. it worked out well for me, because initially I was appointed the deputy, which meant I could carry on doing other things and get used to the role.” (David’s background was in teaching). “My voice wasn’t naturally loud, so I had to learn the technique. I was deputy for 6 years, then my wife, Julie, and I stepped up and we became the main town criers

David was the organiser, and acted as compere, for the hugely successful event which was previously hosted in the city in 2001, 2004 and 2010. The event took 6 months of extensive preparation to set up, with the city hosting 24 Town Criers from 10 countries. “It’s perfect for Chester because its basically a historic form of communication; you ideally need a historic backdrop, and where better than Chester? On top of that Chester does more than any other city to maintain the tradition, with its regular midday proclamations.” David selected the judges, all of whom were from the local community, so did not take part in the competition directly, as is the tradition. The visiting criers were warmly received by the public, and in one event they “shouted from the rooftops” of the Cathedral at Height tour. “One of the most rewarding things was the huge amount of positive feedback from the public, and the sponsors and the criers themselves. One of my favourite comments was from the Town Hall keeper, Dave, who said ‘The town criers lit up the streets”.”

“Theres no better place in the world to have it. We have such a reputation in the world now. When Canada hosted a world tournament in 2013, they said basically, can we use your blue print?”

The town crying season in Chester runs until the 31st August. “This season I’ve had some fresh news to announce. Chester has been voted the best place for watching W(h)ales .. all you need to do is to look up into the hills in the west and you can see Wales every day of the year,” he jokes. Of the regular proclamations, David says, “Sometimes you go to the Cross at 5 to 12 and there’s nobody there. Then, just at the last minute, people come from 4 different directions and you get a crowd of 200 people.” He takes pleasure in his interactions with tourists from all over the world and enjoys answering their questions. “ They ask how I got the job but I never like to give a straight answer. I answered one American, “It was an enlightened judge who said that ‘this would work better than a custodial sentence!’.” A classic one was on the city walls: “How far would it be to do a complete circuit of the walls?” David was asked.  “2 miles” he replied. “2 miles you say? So tell me, which would be the shortest direction to go in?” was the tourist’s response.

His costume, until recently, was produced by his wife. His current attire was made in Liverpool by someone who used to work for the wardrobe department of the Royal Shakespeare company. “It’s a slightly different period; I’ve gone into the Regency period. I’m also considering a civil war outfit which is very important period in Chester’s history. The costume is very authentic Competition judges are keen that costumes don’t have modern features such as Velcro or zips.” Even the buckles on his shoes are functional.

During the autumn and winter David is an in-demand after dinner speaker, and also appears at corporate, civic and ceremonial events. He has travelled all over the country from as far north as Ayr down to Falmouth in the south. His book “For Crying Out Loud!” is almost sold out, with only 106 copies left. (You can get a copy from http://www.chestertowncriers.com/live/ )

David has researched town crying extensively. “Prior to newspapers town criers were woven into the fabric of everyday life. in the 16th century there were 3 working in shifts in Chester: 2 in the day and a night bellman. David stresses that town crying is not a British invention and that the Old Testament of the Bible contains references to the practice in the Book of Proverbs. His one–man show, which covers his own experiences and research. has been perfomed at several venues in the city, including Alexanders, the Forum Studio Theatre, the Little Theatre and  Northgate Church. He is planning a further show in the autumn.

Throughout the interview David is greetly warmly by staff and customers of the pub, confirming his popularity amongst the Chester public. In 2007 David was recognised in the “Pride of Cheshire” awards voted by readers of the Chronicle.

I asked David about his cameo appearance in the film “24 Hour Party People”, where he is seen standing beneath the Eastgate clock, in a post modern twist, announcing the death of Joy Division singer Ian Curtis. “I was contacted late in the day. I had an afternoon booking to work in Liverpool. I didn’t realise it was such a big deal. I was mainly focused on getting away in time! They kept reassuring me, but then there were delays and reshoots, I think they did 3 takes.” Of star Steve Coogan, David says, “He was mainly staying in character. I don’t think he wanted us to have too much interaction! I thought the film was a bit of an anti–climax after my bit!” David also acted in ITV’s Moll Flanders… “Just to show how versatile an actor I am, I played a town crier in that as well!”

David has met many celebrities over the years, from Glenda Jackson, to Lucy Meacock to Gordon Banks. Of meeting Prince Charles and Camilla he says, “I spent the previous 24 hours desperately hoping I wouldn’t call her Diana!” He says the nicest person he’s met was weather reporter Carol Kirkwood; “She’s just the same off camera as she is on; delightful.” He was hopeful of meeting his big musical hero, Bob Dylan, via a chance meeting with someone who knew his UK tour manager. “I phoned him up but the response from the manager was, “Join the queue. I’ve been Bob Dylan’s tour manager for seven years and I haven’t met him!”

One Reply to “OYEZ ! OYEZ! An interview with David Mitchell”