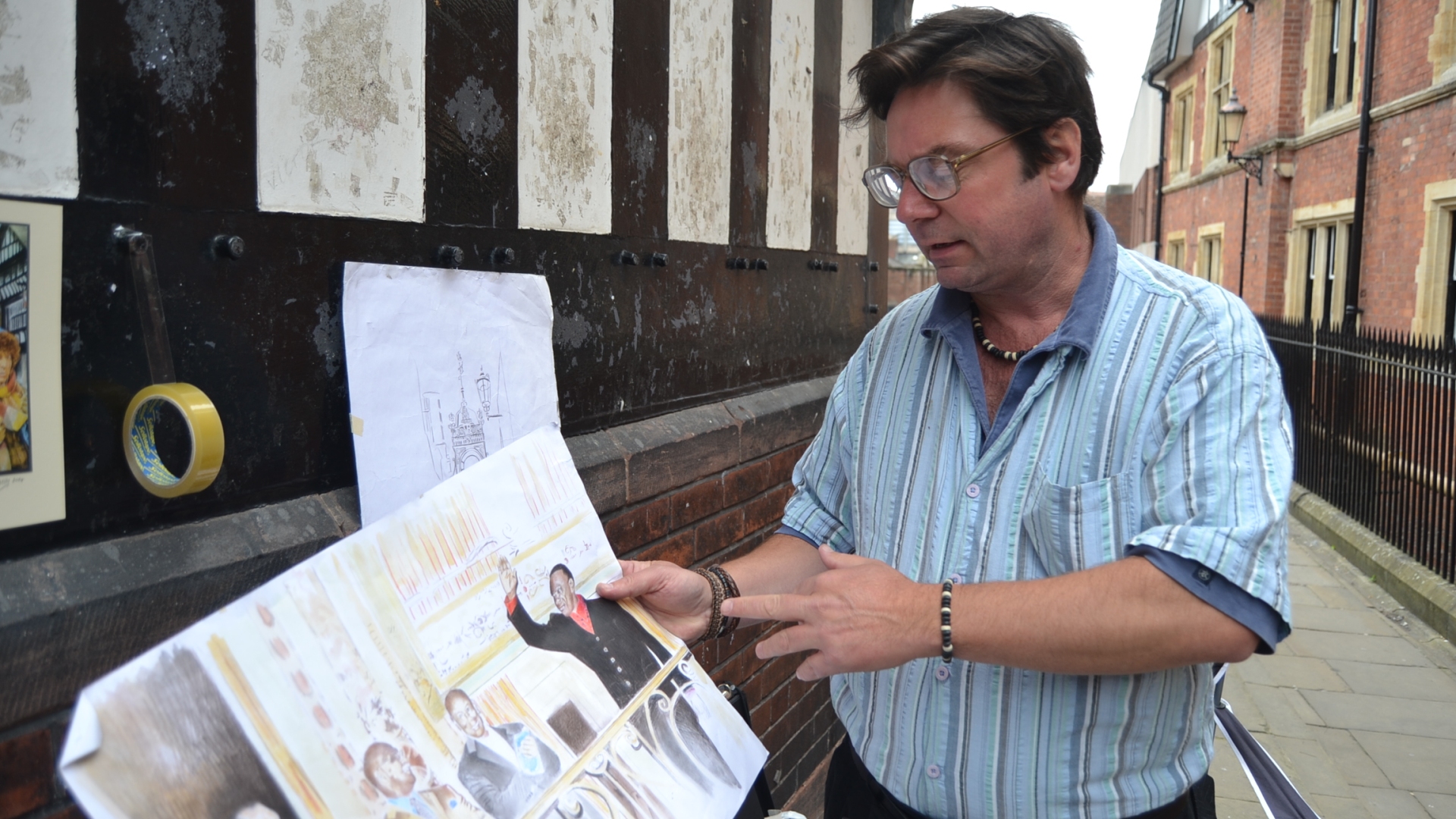 Artist John Donnelly (http://johndartschesteruk.wordpress.com/) , unofficial tour guide and ambassador to the city has been sketching on the city walls next to the Eastgate clock for 20 years. Here he talks about his art and how the city has changed in the last two decades.

“It was a beautiful August morning, I’d just finished college and was at a loose end..I didn’t know what to do in terms of a career and I’d been the pub the night before and all the lads said “why don’t you get yourself a sketchbook, go on the walls and start drawing?”” John went to Wolverhampton Polytechnic and was inspired by his tutor Don Bessant. He was a fellow of the royal college of arts in the 1960s, at the time when David Hockney was there. Bessant dated Julie Christie and accompanied her to the Oscars in 1966. “She left him for Warren Beatty” says John. “He was a great tutor, a great painter and artist in his own right. I owe a lot to him… Don taught me a lot about drawing, and the love of drawing, the simplicity of it, the beauty of it…” He was also inspired by his brother Brian, who taught art for many years and now owns the Art shop on Watergate row.

John is well known for his Dalek pictures. This came about quite randomly. John was working on a serious sketch of the clock which had taken 3 -4 days to finish. “I usually put a couple of figures into the picture to give it a bit of perspective.. and on this occasion, instead of putting people in, I put a couple of Daleks in. Unbeknownst to me, there was an American, watching over my shoulder and he nearly tore the thing out of my hand! He was a Doctor Who fanatic! Now I send my Dalek pictures all over the world, I take commissions.. cybermen, anything really!”

I asked John about the problems of being an artist/creative in the “real world”.. “Cash flow!” he replied instantly.. “ you get periods when its very quiet, you get very despondent. I’ve done agency work, in factories.. I’m not knocking it. It brings you back to earth, I’m very lucky to be able to do what I do, and as an artist every day is different. Its the beauty of being creative.. of course you never tire of Chester, I don’t think any of us ever do”

“I believe that Chester belongs predominantly to the tourists.. Its the major industry in the city. We live here, but its for their pleasure. Its our job to maintain it, keep it clean and that includes the British visitors that come here. I see a lack of respect, particularly at race times, particularly on Sunday mornings, when the streets are littered and fouled. The cleaners only have so many pairs of hands.. whether the council has to invest more money in cleaning or monitoring these characters I don’t know… What I see some Saturday mornings is not a pretty sight”

“There’s been so many characters over the years” John used to help out in the antique shop, which has sadly now closed. Inside he served Jimmy Nail, Kate Adie, Norris from Coronation Street, Jools Holland and many others. Of the closure of the antique shop he reflects “the number of antique shops has gone down by about 80%, which again is another thing of losing small businesses to the big companies” In 2000 John had a chance encounter with a recently retired Scottish gentleman. He advised him to take up sketching , and 14 years later met him again to be told that John’s words of advice had “changed his life”. In the post John received a series of amazingly detailed photo realistic sketches of famous people

John spoke of the technological revolution he has witnessed: “when I first started they had cameras, sure enough, but they were like bloody big bulky brick things. You didn’t have the immediacy of being able to look at photographs unless you had one of those rubbish Kodak instammatics. Now with the ipad you’ve got your own recording studio. People are faster.. they see an image, click and then move on. They don’t take the time that they should and consider the aesthetics of the scene. Its just click, look at it, move on , click….I heard a woman say the other day that she had taken 146 pictures so far, and this was only at about half ten in the morning” He reflects on childhood holidays with 12 or 24 exposure throwaway cameras and the wait for the the photos to be developed, arriving in the post, only to be chewed by a dog. “I don’t think the technological revolution is all good”

John has a vivid memory of 9/11. “I was sketching that afternoon and a group of Americans walked towards me, and I knew about it, and they didn’t. You’re in a position where you don’t know quite what to say and I remember, really after that, the American market started to change”

John was featured on a European tourism documentary for the Japanese TV channel NHKTV. It was hosted by the popular actress and singer Yuki Saito. John’s photo with Yuki is popular with the scores of Japanese tourists that pass over the Eastgate clock. “I love the idea of the cultural divide being crossed” There are more Japanese and Chinese visitors these days.. There used to be a lot more American visitors… “it was predominantly Americans.. the reason being, you had a lot of the survivors from the second world war, who were stationed nearby at Burtonwood, they would bring their children and their grandchildren over. You get a new generation of Americans, but they have changed after 9/11, I think American has become more insular now. There’s been an increase in Australian and New Zealanders.. Russians as well, when I think back the Russians that we saw coming through, were very small numbers. It was quite amusing in a sense, they looked as though they were in a time warp even in 1994, they were dressed in 1950/60s style clothes.. the women had the 1960’s style Jackie Kennedy style woollen suits and pill box hats.. The Russians that are coming through now are a new generation of wealthy Russians…” John feels that more should be done to push Chester to the new nations full of potential visitors and is personally keen on a Japanese cultural exchange “ like the twin towns principle, but with art”

John currently has an art display in the basement of WHSmiths “it has a great art department and they always have great offers on” he says “ In all the work I do I use WHSmiths products” John’s other work includes a large scale mural in the Istanbul BBQ on brook st. “They had a staircase which was blank and they asked me to muralise it, the whole thing using traditional Turkish scenes. It was fun to do while people were in the restaurant , people were passing by and asking about my work. Art should be about talking and communicating. I gather people are pleased with it, and it adds to their evening out”

“The beauty of Chester is its two cities .. its ground level, the streets, the shops and then you have the walls.. Its a lovely atmosphere on the walls, there’s a tranquillity to it which as an artist I’ve always found very appealing”

3 Replies to “20 years on the walls; John Donnelly”