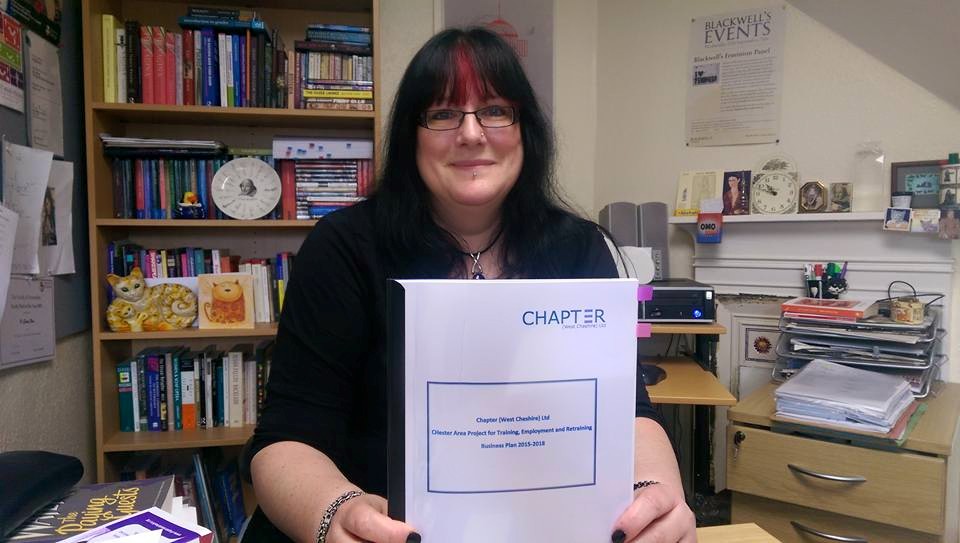 This blog is an expanded version of the interview that appeared on the SC social on Lache FM conducted by Kate Northcott @campaignkate :

Chapter (Chester Area Project for Training, Employment and Retraining) are a mental health charity founded in 1991. Their mission statement is to provide “ high quality innovative community based services related to employment” We chatted to Dr Emma Rees in her office at the university of Chester about her role as a trustee and the good work being done by the charity.

“I’m so pleased to have you here today,I’m really interested in the work you do as campaignkate on twitter as well as the work @Shitchester does. I think they provide a really valuable news role to the community, I think its taken a little while for the community to catch ontothe power of social media. I’ve recently set up the Chapter twitter account and thats taken a while to get going. Its an exciting time for Chapter, we celebrate our silver jubilee next year, so thats 25 years of working in Chester. We have about 200 people on our books and those people have indirect or direct experience of mental health issues.

“I joined personally about 3 /4 years ago because working in a university I encounter lots of young people who are struggling with mental health issues. Statistically of course we all do, because 1 in 4 people experiences mental health issues. Another statistic is that 1 in 10 people spend some time in hospital for mental illness and thats a staggering statistic really

Emma says that there is still a huge stigma about mental health in society:

“Totally and thats one of the things we try and fight against. I run a third year undergraduate module called representations of mental illness in literature and film, from the classics like One flew over the cuckoo’s nest,Girl interupted, coming right up to the present day with things like Shutter Island. We talk about how people talk about mental health… If you break your leg, you wear a cast, people can see that , you have an x ray when you first break it, an x ray half way through the healing process, and you have an x ray at the end, you have 3 measurable pieces of evidence or proof. Theres no possible way you can measure how someone is feeling in terms of their mental health, its very very different.And that tangible quality makes people I think, more understanding.To say to somebody with depression “just try and fight to get up today, try to engage” its like saying to somebody with a broken leg “ just try and run a marathon, it aint gonna happen!”

The bulk of Chapter’s funding comes from the local authority and most people are referred to the service via their GPs .“We are trying to raise consciousness so that people in the Lache, in Handbridge, wherever they are in Chester or Ellesmere Port , can go to their GPs, and know that because they’ve been treating them for whatever mental health problem they’re living with, they can ask for support and help and for a referral. They then get referred to us, they have an initial one to one meeting.. We’re pretty unique because we see people for sometimes years at at time .. the nature of mental illness is that there are times when people feel more able to engage and times when they don’t”

“We have done everything that we can to raise our profile among GP , we need to do more. More

GPs need to be aware of us, so that we’re perhaps the first person they think of. Theres a wide range of mental illnesses and sometimes people cope pretty well with day to day living, and then the following month they may not be doing quite so well. We’re talking about depression, we’re talking about PTSD , panic and anxiety.. through to psychosis , schizophrenia and any kind of chronic condition.

“theres no such thing as mild depression for the person thats experiencing the depression. But some illnesses are perceived as being more difficult to live with “ Chapter is for anyone that has experienced mental health issues and “ who has therefore felt that , perhaps detached from their community , detached from “normal” everyday existence.

“We offer a bespoke service to anyone who’s referred to us by their GP , we assess their particular needs, their requirements, their ambitions, their hopes, and tailor our services to them . It may be that they want to source voluntary work so we help them do that , it could be that they want to go into employment in which case we get then a work placement and support through that . We have regular one to one sessions with members of our staff and our volunteers and they’re also helped with CV development , so that when they do begin to feel they have a bit more independence, they have a good CV that they can take out there.

Chapter run a successful gardening project : “I recognise the thereupatic values of gardening. As a charity we support people to engage in gardening at whatever level they like. We offer a lawnmoving service for people who have gardens that they loved, but are perhaps no longer able to attend, perhaps because of illness, or age or disability. We go into the community and our clients have the opportunity to do the gardening which is thereupatic for them , and at the same time they’re giving something back to the community.” The gardening project will be expanded next year for the silver jubilee : “We’re going to relaunch it , its going to be new and exciting and we’re going to offer far more. We are making that coincide with the launch of the new website and we’ve had support from MBNA through their charity programme”

“We are always on the lookout for volunteers and we have a really good volunteer training prgramme. We also need a treasurer on our board of trustees, if there are any retired accountants or book keepers out there, please get in touch”

Emma quotes from “Prozac Nation” by Elizabeth Wurtzel.. “she talks about “until you’re actually flying out of a window, people won’t support you in a way that that you need them to support you”. But help is available from agencies such as Chapter..

“Whats so rewarding is that on the board of trustees we have a couple of service users, so theres a direct line thrrough to the front line, through to the people that we’re working with. They’re us rather than them and I think thats a very important thing .. and at a recent board of trustees meeting, a service user said that they had recently become a mentor for new people coming into the service, and that particular service user said something about how they hadnt been expected to be alive at this time a year ago, and helping somebody else to be alive. When you hear that, thats when you remember what you;re doing and why youre doing it” Its comforting to know that whatever problems people are facing they do not have to go through it alone thanks to the work of organisations like Chapter, a flickering light in the darkness.