The new B&M on Sealand road opened today, taking on the premises vacated by Tesco home. Tesco closed the store in March as a cost saving measure along with 42 other unprofitable stores. By possession of a “big camera” we soon attracted the attention of the B&M communications manager who was happy to help in the absence of any official press. Opening the store today was local hero Jemma Gregory, co founder of SPACE (http://www.spacecheshire.org/) a charity which“supports children with additional needs to play in a safe and friendly environment”. SPACE is our selected charity for the Lego display in the market hall and an interview with Jemma and co founder Claire Edge featured on an edition of my radio show. 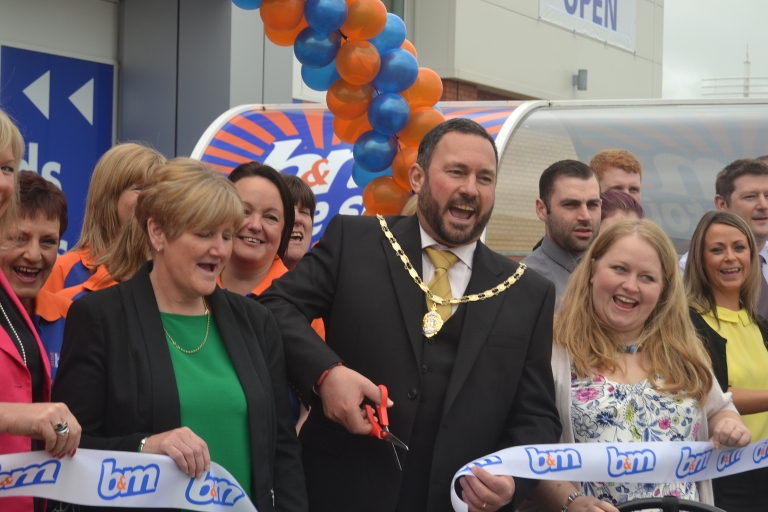 Also in attendance today and in one of his first public appearances was newly appointed Lord Mayor Cllr Hugo Deynem (affectionately known as Hugo Denim- jacket) . Hugo was appointed in a long winded ceremony on Thursday night at the town hall, shortly after a heated council meeting in which Hugo lost the vote to be chair of the council to Cllr Bob Rudd. Hugo (allegedly the reincarnation of Winston Churchill)  was on good form today chatting to members of the public and posing for photos with costumed characters.

We chatted to B&M area manager Colin Rockcliffe.: “this is our flagship store, the biggest store in the country, 60,000 square feet. We are absolutely pleased to be coming into our third store in the Chester area… we are pleased to say that all of the Tesco staff.. any that applied to us, we recruited , we saved 30 jobs  from Tesco. We have a total of 80 colleagues plus a management team. We walked into here 2 weeks ago, to a bare empty shell and the whole team have worked fantastically well… “

“A few weeks ago we announced that we were looking for a local hero.. we probably had about 40 nominations put to us… through (store manager) Julie and the management team we asked them who to choose who the standout candidate was .. that was Jemma and the SPACE team, we are really proud to have them here to open our store…we have given them some vouchers to spend on the kids, and hopefully they’ll have a good time when they’re in”

Colin also confirmed that the other two B&M stores in Chester would continue to trade and that the flagship store would compliment the existing offer. Perhaps movingly the site of the former Costa coffee on the top floor now houses an array of garden furniture and other homeware items. The store will be trading 9- 8 weekdays, 9-7 Sat and 11-5 on Sundays.

Afterwards we caught up with local hero Jemma, “I was thrilled to have been nominated to open the B&M store. The kind gift of £250 vouchers will make a huge difference to the charity and enable us to buy more art & craft materials and toys. It was lovely to meet the new mayor who was very interested in and supportive of the charity”

Craig Gregory, husband of Jemma : “it was nice seeing Jemma open the store, I’m really proud of her, she’s done a lof for the community.. and its a bit of excitement isn’t it, on a Saturday morning!”