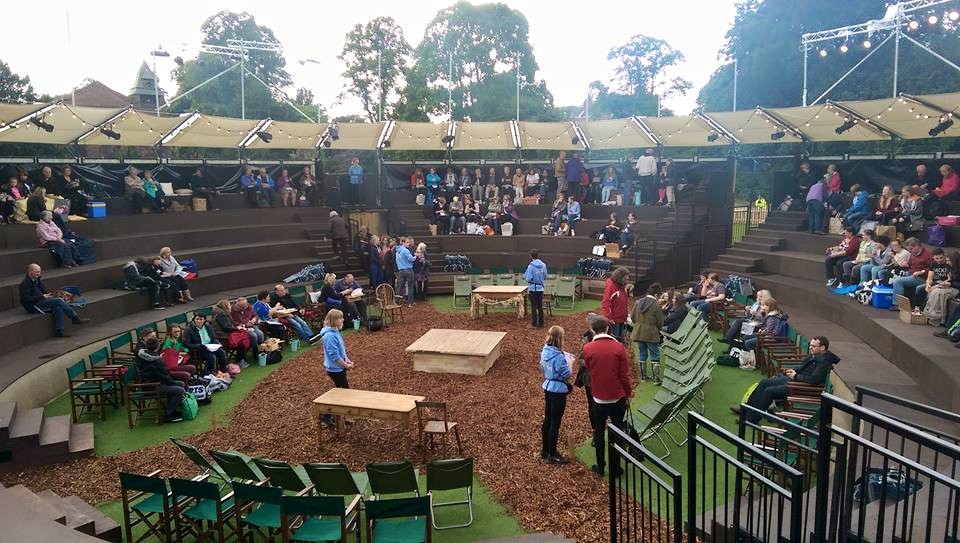 Warning: this review contains spoilers for the play (c1591).

The very succesful Theatre in the Park returns this year with the Shakespeare tragedy, Romeo and Juliet. Not my particular favourite, I prefer the darkness of Macbeth, but in the intimate surroundings of the open air theatre it was a joy to behold. We entered  the circular arena, with no race style restrictions on bringing your own alcohol, with the smell of smoked salmon and the sound of corks popping, as a stray pigeon swooped down looking for a savoury cast off. One couple were chowing down on a pizza express, everything was civilised and casual, the scene  marshalled by the Performs staff in their cool blue uniforms. My best fiend Cllr Jones pondered if drinking in the park would be allowed under the proposed PSPO…. “That’s council business” I replied.. This wasn’t a night for council matters, it was a night for love, culture and death. 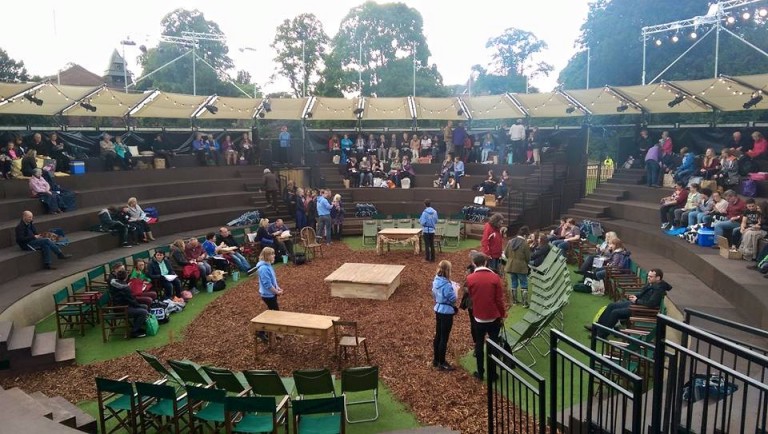 Weather worries were quickly swept away as the sun broke through just before the start. The opening scene features a raft of colourful anti social behaviour, from two excellent guitar strumming (unlicensed!) buskers, street unination and a massive family feud including an attack with a piece of pastry. Though the play was set in Verona, the mainly Northern accented cast grounded the play in a universal reality and stressed the common themes transcending borders and peoples. The Scottish Romeo,Adam Harley (“ that’s David Tennant” remarked Jennie) enters the action already lost in unrequited love bounding across the stage with his pal the equally energetic Benvolio (Thomas Richardson). Experienced TV actor James Holmes, I recognised him from Miranda and other things was also good as the head of the Capulet household. Juliet , the eloquent 14 year old, Jessica Clark, portrayed angsty and all powerful teenage love with tenderness and the occasional heartfelt growl.

Police sirens and hooting owls from the outside world seemed to warn of the doom that lay ahead just prior to a fantastic party scene, with some olde- worlde ballroom dancing and the simple but effective music. Performed live, its melody transported me to another place, even with an ear infection. Romeo and Juliet meet and the rest is history. Moments of great comedy deflect from the coming darkness, with a fair amount of interaction with the audience, the Russell Brand-esque Mercutio being particularly fun, with looks of joy being observed all around the audience. Soon, the eponymous stars are crazy in love, but their essential likeability prevents it descending into a tenth doctor/Rose style nausea fest. Theres a whirlwind romance, but it all goes a bit wrong at the end of the act with some well choreographed gang warfare leading to multiple deaths.. That escalated quickly…

The darker second half begins just as night is starting to fall. “Come, gentle night, give me my Romeo” implores Juliet as things spiral out of control .A rejected arranged marriage leads to a vengeful mr Capulet telling his daughter she might as well die in the street,       re- inforcing R +J’s “us against the world” mentality. A mix up with a special potion ,and Romeo meeting up with a backstreet poison dealer leads to it all  ending in tears with the lovers in each others arms, united in death. The final scene by candlelight as everyone mourns, to a beautiful Italian elegy sung and played by the cast, who gather round, their world in bits.. 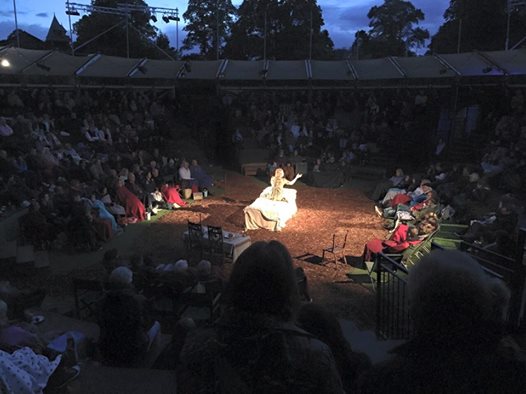 Romeo and Juliet is brilliant, the magic of the language and the universal themes transcending other issues, the play could feature feuding Blacon/Lache families, or the Conservative/Labour parties in cwac, its all about love. And its clear this production has been put together with love, from the cast, the music and the staging, it brings a special magic to Chester

One Reply to “Romeo and Juliet review”